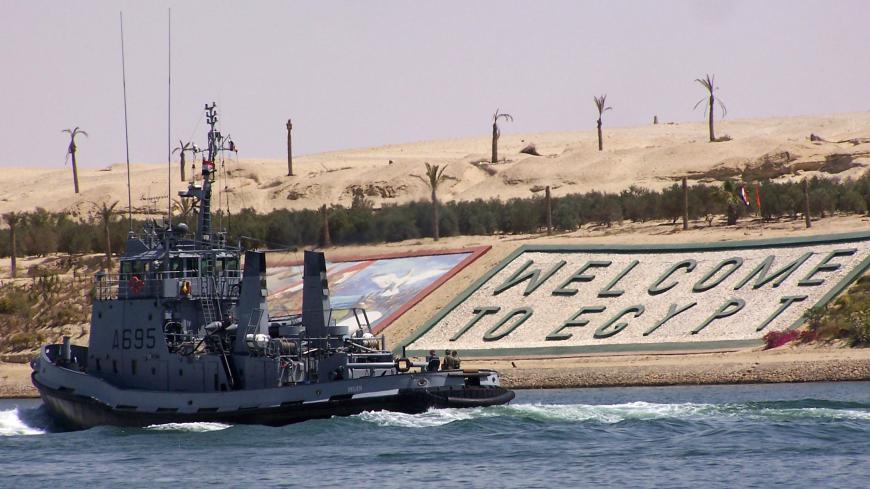 The French navy coastal tug Belier crosses the Suez canal off the coast of the port city of Ismailia, east of Cairo, on its way to the Mediterranean sea. The US State Department announced a plan Tuesday to sell naval surface-to-air missiles to Egypt to help protect the canal. - AFP via Getty Images

The Biden administration announced a plan to sell nearly $200 million worth of naval surface-to-air missiles to Cairo on Tuesday, just hours after Egypt’s government arrested two relatives of an Egyptian-American activist.

The State Department on Tuesday afternoon informed Congress of the proposed $197 million sale of up to 168 naval surface-to-air Rolling Airframe Missiles to Egypt to bolster the country’s coastal and Suez Canal defenses.

A State Department statement said the sale would support the foreign policy and national security of the United States by helping to improve the security of an ally "that continues to be an important strategic partner in the Middle East.”

Earlier Tuesday, the prisoners’ advocacy group Freedom Initiative said in a statement that Egyptian authorities had arrested two cousins of US-based rights activist Mohamed Soltan. A third cousin was questioned and ordered to turn himself in after recovery from an unrelated injury, said the group, which is headed by Soltan.

Security forces detained his cousins Ahmed Soltan and Khairi Soltain during raids that took place in homes in Alexandria and Mounofiyya. The two had been previously detained last summer in what Mohamed Soltan alleged was retribution against him, but released shortly after Joe Biden was elected president last fall.

Mohamed Soltan’s father is currently serving a life sentence for participation in the Muslim Brotherhood, which the regime of Egyptian President Abdel Fattah al-Sisi has declared a terrorist organization.

Mohamed Soltan is suing former Egyptian Prime Minister Hazem el-Beblawi in US federal court for alleged complicity in Soltan's torture when he was detained in 2013. Days after he filed the suit, his father was transferred from his prison cell to an unknown location and has not been heard from since.

Why it matters: Such weapons sales typically are reviewed for several weeks if not months, but the announcement’s timing could scarcely be worse.

The Biden administration has vowed to take a hard line with its Middle East partners on human rights abuses, including Egypt. As a presidential candidate, Biden said it was “unacceptable” for Egypt’s regime to threaten the families of Soltan and other activists abroad.

Rights groups estimate the Sisi regime has swept some 60,000 citizens into prison since taking power in a 2013 coup. State Department spokesperson Ned Price said earlier Tuesday that the administration was looking into reports that two of Soltan’s cousins had been detained. The arms sale was announced later that afternoon.

Although the crown prince was assessed by the CIA to have been behind the plot that saw Saudi dissident and Washington Post columnist Jamal Khashoggi killed and dismembered in 2017, President Donald Trump’s administration continued to cooperate closely with Mohammed bin Salman on regional policy.

The Biden administration has ended US support for the Saudi-led coalition’s war in Yemen and frozen major weapons sales to Riyadh and the United Arab Emirates, but continues defensive support for Gulf partners.

Tuesday’s announcement suggests the new administration’s willingness to withhold arms sales to leverage human rights issues in the Middle East may prove more limited than some observers have hoped.

Ironically, the Trump administration — which enjoyed close relations with Sisi’s regime — deliberated halting all US military aid to Cairo over its purchase of Russia’s Su-35 fighter jets, but the White House ultimately decided against the move.

What’s next: The State Department has given itself until Feb. 26 to familiarize itself with Soltan’s lawsuit before providing documentation regarding Beblawi’s possible immunity.

Know more: Elizabeth Hagedorn has the details on Soltan’s allegations and looks to the future of US-Egypt relations.