US citizen’s torture suit to test Egypt relations under Biden

The Joe Biden administration may take a position on the immunity of Egypt’s former prime minister in a lawsuit brought by an American human rights activist. 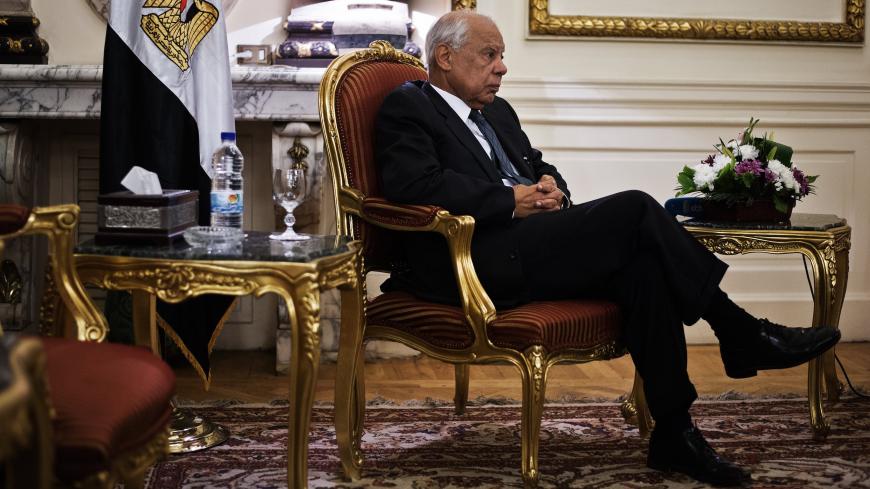 Egypt's interim Prime Minister Hazem el-Beblawi gives an interview to a journalist from the Agence France-Presse at his office in Cairo on Nov. 24, 2013, as Egypt's interim president approved a controversial law regulating demonstrations. - GIANLUIGI GUERCIA/AFP via Getty Images

The US District Court in the District of Columbia will soon decide whether Hazem el-Beblawi, Egypt's interim premier from 2013 to 2014, holds diplomatic immunity status that would shield him from a federal lawsuit filed in June by activist Mohamed Soltan. The suit asserts that Beblawi directed and monitored the “brutal, orchestrated regime of detention and torture” of Soltan, who was arrested after live-tweeting Egypt's violent crackdown on protesters in 2013. During his nearly 22-month imprisonment, Soltan says prison guards tortured him with a purposefully starved attack dog, seizure-inducing strobe lights, sleep deprivation and other forms of extreme physical and emotional abuse.

His lawsuit was filed under the Torture Victim Protection Act, a US law that gives federal courts jurisdiction over suits filed by victims of state-sponsored torture abroad. Soltan, who was released from Egyptian custody in 2015 following sustained pressure from the Barack Obama administration, says his case is as much about deterring future human rights abuses as it is holding Egypt accountable for his own ordeal.

Since seizing power in 2013, Egyptian President Abdel Fattah al-Sisi has waged an unprecedented clampdown on peaceful dissent. Of the estimated 60,000 political prisoners jailed under Sisi’s watch are a number of US citizens and permanent residents, including Soltan’s father, who is serving a life sentence for his role in Egypt’s Muslim Brotherhood.

Days after Soltan filed his lawsuit, Salah Soltan was moved from his prison cell to an unknown location. He hasn’t been heard from since.

Soltan believes his father’s disappearance, along with the arbitrary detention of five of his Egypt-based male cousins, was Cairo’s way of pressuring him into dropping the lawsuit.

It has “certainly beat me down,” Soltan said of the apparent reprisals against his family. “But that abuse by the repressive Egyptian regime has only strengthened my resolve to pursue justice.”

For Soltan to get his day in court, US District Judge Colleen Kollar-Kotelly must first determine whether Beblawi holds a diplomatic status that would immunize him from prosecution. The State Department’s Office of Foreign Missions told Beblawi’s defense team in a July letter that according to its records, the former premier carries immunity as a “principal resident representative” of Egypt to the DC-based International Monetary Fund (IMF). Until Oct. 31, Beblawi served on the UN agency's executive board.

But lawyers for Soltan, as well as members of Congress, have questioned whether Beblawi's immunity status was ever certified, as required under the relevant UN treaty. They also point out that Beblawi is being sued for actions that occurred before his employment at the IMF, and even then, IMF officials are typically only entitled to immunity for acts taken during their official duties.

Beblawi’s lawyers did not reply to a request from Al-Monitor seeking comment but in past court filings have dismissed questions over Beblawi’s immunity as “a smokescreen to hide a failed case.”

In December, the judge invited the State Department to produce additional documentation regarding Beblawi’s immunity status or submit a formal position on the issue. The administration of President Joe Biden responded late last month, saying it needed until Feb. 26 so that new State officials could “have sufficient time to become familiar with the issues in this case."

Eric L. Lewis, Soltan’s lead lawyer, said they are hopeful the Biden administration will take a “firm position that it will not approve immunity for torturers, generally and certainly not in the situation here.”

Lewis is encouraged by Biden’s campaign pledges on human rights and the fact that many Biden administration officials were involved in securing Soltan’s release in 2015. Also reassuring is a tweet from Biden putting Sisi on notice this July, warning that it is “unacceptable” for the Egyptian government to threaten Soltan’s family and those of other exiled activists.

A State Department official declined to comment on the pending legal matter, but said, “The welfare of all US citizens overseas, especially those detained or incarcerated, remains a top priority for the State Department.”

Were the Biden administration to determine Beblawi is entitled to diplomatic immunity, it would set a “dangerous precedent,” said Philippe Nassif, advocacy director for the Middle East and North Africa at Amnesty International USA.

Much like the Beblawi case, Saudi Arabia’s Crown Prince Mohammed bin Salman is facing lawsuits that could test Biden's pledge to take a tougher line on Riyadh. The Saudi royal has claimed immunity in both cases, one accusing him of ordering the assassination of an ex-Saudi intelligence official in Canada, and another blaming him for the murder of Washington Post columnist Jamal Khashoggi.

“The fact that we could see immunity given to somebody like [Beblawi] sends a message to Mohammed bin Salman and a lot of other leaders in the world that are closely watching the case,” Nassif said. “I think that’s partly why the Egyptians have been so adamant and nasty when it comes to going after Mohamed Soltan’s family.”

In the same week that Biden clinched the presidency, Egypt released Soltan’s cousins after 144 days in prison. They still face possible trial on charges that include “spreading false information to shake the grandeur of the state,” the same widely denounced charge that Soltan himself faced seven years ago.