A coalition of human rights groups accused the Egyptian government of intimidating and harassing the family members of prominent activists living abroad. 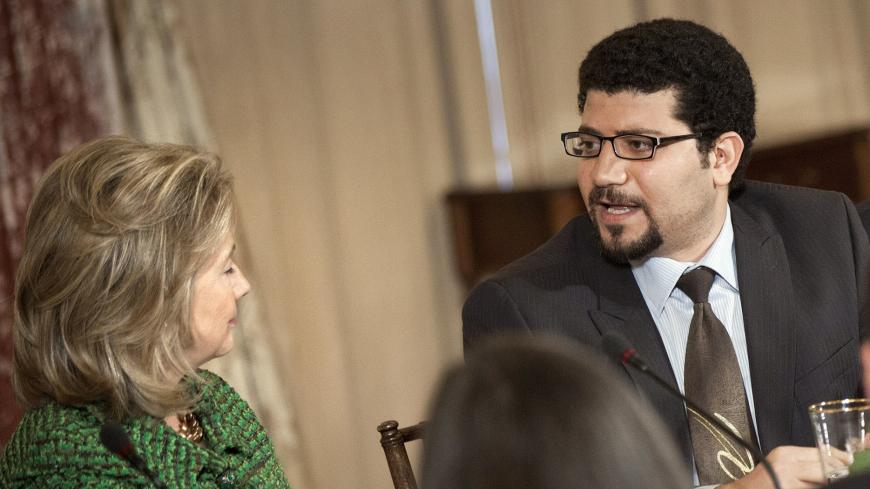 Sherif Mansour of the Committee to Protect Journalists says he and his father have been charged with terrorism in Egypt, where one of his cousins remains in pretrial detention. Here, Secretary of State Hillary Rodham Clinton (L) listens as Mansour (R) speaks about Egypt at the State Department on Feb. 16, 2011, in Washington. Mansour then worked for Freedom House. - Photo by Brendan Smialowski/Getty Images

The government of Egyptian President Abdel Fattah al-Sisi is harassing and intimidating the families of activists in the United States, targeting at least four families since August, a coalition of human rights groups said Friday.

Egyptian authorities have also gone after the families of critics living in Turkey, Germany and the United Kingdom, the New York-based Human Rights Watch and 21 other organizations said Friday, accusing security forces of “unlawful home raids, arbitrary arrests, enforced disappearances, and prolonged detention of family members without trial or charges.”

Egyptian security forces raided the homes of Egyptian-American activist Mohamed Soltan’s relatives last weekend and arrested two of his cousins. The arrests are seen as retaliation for the lawsuit Soltan filed against former Egyptian Prime Minister Hazem el-Beblawi in June. Soltan, who was held as a political prisoner in Cairo for between 2013 and 2015, accuses Beblawi of orchestrating his torture in detention.

Days after Soltan filed his lawsuit, Egyptian security forces arrested five of his cousins before temporarily releasing them in a possible goodwill gesture to the Biden administration in November. Soltan’s father, who is serving a life sentence in Egyptian prison for his role in the Muslim Brotherhood, hasn’t been heard from since the summer.

Sherif Mansour, the Washington-based Middle East and North Africa program coordinator at the Committee to Protect Journalists, said Egyptian security forces arrested nine of his family members in August. Eight were released from detention shortly after, but Mansour’s cousin Reda Abdelrahman was accused of joining a terrorist organization and remains in pretrial detention.

Mansour tweeted Friday that both he and his father are also charged with terrrorism in his cousin’s case, adding that Egypt’s “hostage-like arrests” were aimed at forcing them into silence.

Most recently, Egypt arrested several relatives of Aly Hussein Madhy, an activist granted asylum in the United States, after he called for celebrations to mark the 10th anniversary of Egypt's January 25 Revolution of 2011.

“They took my father from his wife and my younger siblings, terrifying them. They messed up the whole house and stole everything they found,” Mahdy said in a Facebook video.

Mahdy, who is a graduate student at the University of Illinois at Chicago and video blogger, told Human Rights Watch that the whereabouts of three of his arrested family members are unknown.

President Joe Biden has pledged to rethink the US relationship with Egypt, a country that is the recipient of roughly $1.3 billion in US military assistance per year. In a July tweet, he warned Cairo it was “unacceptable” to threaten Soltan’s family and those of other exiled activists.

But on Tuesday — the same day news broke of the arrest of Soltan’s cousins — the Biden administration announced a plan to sell nearly $200 million worth of naval surface-to-air missiles to Cairo. Human rights groups were quick to denounce the planned sale, which State Department spokesperson Ned Price described as a “routine replenishment of defensive weapons.”

Democratic Reps. Don Beyer of Virginia and Tom Malinowski of New Jersey, who co-chair the recently formed Egypt Human Rights Caucus, said in a statement Friday that they were disappointed that the administration’s announcement wasn’t “preceded by preliminary outlines of how the Biden administration plans to elevate human rights in all aspects of our relationship with the Egyptian government.”

The congressmen said they looked forward to working with the new administration to address the human rights crisis in Egypt, including the country’s detention of roughly 60,000 political prisoners.