Intel: Blinken tells Egypt that human rights are 'central' to US relationship 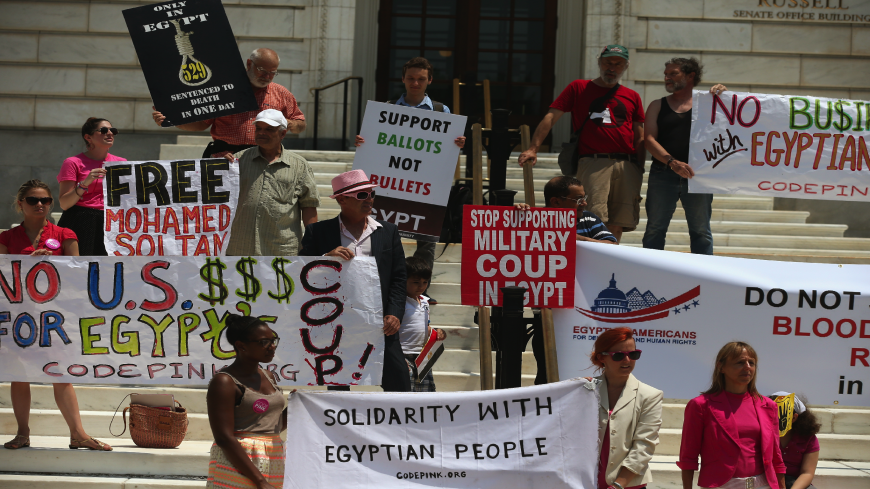 Members of CODEPINK and the group Egyptian Americans for Democracy and Human Rights protest in front of the Russell Senate Office Building on Capitol Hill, July 9, 2014 in Washington, DC. The protest was held to mark the one year anniversary of the military coup in Egypt led by now President Abdel Fattah el-Sisi and to call for a cut off in U.S. funds to the military. - Mark Wilson/Getty Images

Human rights will feature significantly in the Biden administration's relationship with Egypt, Secretary of State Antony Blinken told his Egyptian counterpart on Tuesday, a week after Washington greenlit the potential sale of missiles to Cairo.

During his phone call with Egyptian Foreign Minister Sameh Shoukry, Blinken “raised concerns over human rights, which he emphasized would be central to the US-Egypt bilateral relationship,” State Department spokesman Ned Price said in a statement.

Blinken also expressed concern over Egypt’s planned procurement of Su-35 fighter aircraft from Russia, which the Trump administration had warned put Cairo at risk of US sanctions under the Countering America’s Adversaries Through Sanctions Act (CAATSA).

President Joe Biden has pledged to hold rights-abusing countries accountable, including Egypt, where security forces have reportedly jailed tens of thousands of government critics since President Abdel Fattah al-Sisi came to power in 2013. A number of US citizens and permanent residents have been arbitrarily arrested and detained in Egypt, and last week, a coalition of human rights groups accused the Egyptian government of intimidating and harassing the family members of prominent activists living in the United States.

“Our shared security interests must align with respect for democracy and human rights, including the importance of a strong civil society,” Blinken said in a tweet on Tuesday.

Why it matters: The call — Blinken’s first with his Egyptian counterpart — comes one week after the Biden administration announced it had approved the sale of nearly $200 million worth of naval surface-to-air missiles to Cairo, which the State Department justified as bolstering the security of an ally “that continues to be an important strategic partner in the Middle East.”

Human rights groups were quick to condemn the timing of the proposed sale, which the Biden administration unveiled the same day US-Egyptian activist Mohamed Soltan revealed that Egypt had once again arrested his relatives in what he said was a campaign to silence him.

What’s next: As a candidate, Biden vowed “no more blank checks” for Egypt, a country that receives roughly $1.3 billion in US military assistance per year — making it the second-largest recipient of US aid dollars after Israel. It remains to be seen whether Biden will use any of the annual assistance as leverage on rights reforms, but there is growing momentum in Congress to do so.

In January, Reps. Don Beyer (D-VA) and Tom Malinowski (D-NJ) announced the formation of the Egypt Human Rights Caucus, coinciding with the anniversary of the 2011 Egyptian revolution. The lawmakers called on the Biden administration to engage with Congress on plans for “expanded human rights due diligence” before supplying the Egyptian military with further weapons.

Know more: Elizabeth Hagedorn has the latest on Soltan’s lawsuit against Egypt’s former prime minister and takes a closer look at how US-Egypt relations could change under Biden.