Controversial statements reported by Qatar's state news agency and later attributed to a hack have revealed deep tension among members of the Gulf Cooperation Council. 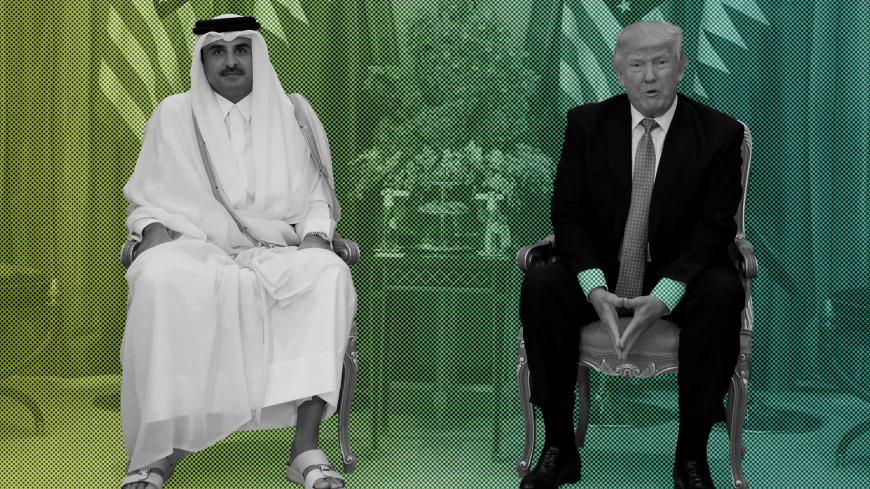 Qatari officials quickly denied these statements attributed to their monarch. They accused an "unknown entity" of hacking Qatar News Agency and publishing false statements. Officials vowed to investigate the matter and prosecute those held responsible. Nonetheless, Saudi and Emirati media broadcast this "fake news" throughout the night of May 23, leading many Qataris to believe that a foreign-orchestrated coup was underway in Doha.

This drama unfolded in the aftermath of Trump's visit to Saudi Arabia and his speech before several dozen Muslim leaders at the Arab Islamic American Summit in Riyadh. It also follows growing anger in Abu Dhabi, Cairo and Riyadh over Al Jazeera's recent coverage of conflicts in Libya and Yemen.

Although Trump praised Qatar, which hosts the US Central Command's (CENTCOM) forward headquarters at Al-Udeid Air Base, as a "strategic partner" in the struggle against terrorism, some GCC states, Egypt and influential voices in Washington see the Trump presidency as a golden opportunity to change Washington's relationship with Qatar. The administration must tell Doha that its days of sponsoring Islamist movements and hosting Muslim Brotherhood figures are over if the emirate wants to maintain good ties with Washington, according to these voices.

Speaking in Washington at a conference sponsored by the Foundation for Defense of Democracies on May 23, former Defense Secretary Robert Gates advised the Trump administration to remind Qatar that the United States can establish an alternative to Al-Udeid elsewhere in the GCC if Qatar's alleged support for terrorism continues. US Rep. Ed Royce, R-Calif., accused Doha of harboring the "worst of the worst" and declared that Qatar must display "a change in behavior immediately." Earlier this month, John Hannah, a senior fellow at the Foundation for Defense of Democracies who served on Vice President Dick Cheney's national security team, alleged that Doha backs the "region's most radical, destabilizing and dangerous forces." Former Ambassador Dennis Ross recently wrote that "Qatar is most definitely not an ally" of the United States regarding counterterrorism, and that unless Doha becomes "a genuine partner and not a party that contributes to the very threats we need to counter" Washington should make its intention clear to Qatar that it will transfer CENTCOM headquarters.

A Qatari interlocutor, speaking to Al-Monitor on condition of anonymity, maintained that those in Washington going after Doha are working in tandem with those behind this week's hacking — a "cheap move," as the interlocutor described it. On May 21, Sheikh Saif Al Thani, the director of the Government Communications Office, claimed that Qatar had become the victim of a "smear campaign," asserting that all claims of Qatar supporting terrorism are entirely false. Upon Trump's arrival to Saudi Arabia, such publications were intended to hurt Qatar's interests, according to the government statement. "In fact, as the authors of these articles must know, the government of the State of Qatar — like all of its neighbors in the Middle East — is a target for these terrorist groups."

On May 18, Arab News interviewed the Qatari foreign minister. He asserted that Qatar doesn't sponsor the Muslim Brotherhood, yet it will not label the Brotherhood a terrorist group because it represents no threat to Qatar's security. Thani defended Doha's hosting of prominent Brotherhood figures as "political opposition" and stated that Qatar prohibits such individuals from using its territory as a "platform to abuse or attack their own countries." Regarding Yusuf al-Qaradawi, an incendiary Egyptian-born Brotherhood cleric who has resided in Qatar for many years, the foreign minister stated that because he is a Qatari citizen and elderly, Doha "cannot inform him to depart Qatar."

Since Emir Tamim succeeded his father in 2013, he has taken major steps to ensure Qatar's good standing in the GCC. Determined to avoid a repeat of the 2014 diplomatic spat, in which Abu Dhabi, Manama and Riyadh withdrew their ambassadors from Doha for eight months to punish Qatar for supporting the Brotherhood, Emir Tamim has aligned his country's foreign policy quite closely with the Saudis vis-a-vis Iraq, Syria and Yemen. Yet such tensions have not disappeared, especially with the UAE, and the prospects of Qatar becoming isolated within the GCC again are real.

It's not clear how Trump will approach Qatar or how his administration will view Doha's relations with Hamas and other Islamist entities. Thus far, the US administration has sent Qatar warm signals. Last month, Secretary of Defense James Mattis traveled to Doha to affirm Washington’s commitment to strengthening US-Qatar relations. On May 8, Qatar's foreign minister met with his US counterpart Rex Tillerson in Washington to discuss enhancing bilateral ties and regional security. While in Riyadh, Trump sat with down with the emir and affirmed that "we've been friends now for a long time" and that Washington plans to sell Doha "lots of beautiful military equipment."

Recently, the Qatar Investment Authority has made massive investments across the United States. As Trump seeks more foreign exchange to create jobs at home, Qatar is in a position to use its wealth to support the president's "Make America Great Again" ambitions. Ultimately, the authority's investments in America and future lucrative arms deals may establish "insurance" policies for US-Qatar relations against agendas directed against Doha.

Although Trump praised Qatar as one of America's key strategic partners, some in Washington and certain Arab capitals believe that Doha is hindering regional and international efforts to combat terrorism by providing media platforms (chiefly through Al Jazeera) and a safe haven to extremists in the emirate. In Doha, there are legitimate concerns about the new US administration agreeing with this understanding of Qatar's ties with Islamists threatening US security and requiring Washington to pressure the Arab Gulf monarchy into changing its foreign policy.