The curious timing of the Qatar crisis

The latest Middle East crisis, the rift between Qatar and its Gulf Cooperation Council partners, has come at a sensitive time for the Gulf states. 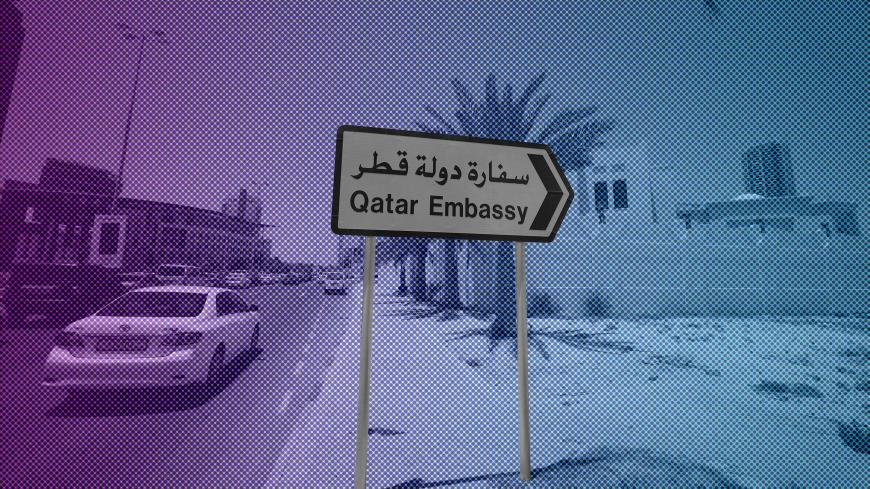 A sign indicating a route to the Qatari Embassy is seen in Manama, Bahrain, June 5, 2017. - REUTERS/Hamad I Mohammed

Shortly after US President Donald Trump delivered his historic address to the US-Arab-Islamic Summit in Riyadh, seeking to align Washington’s traditional Arab allies against Iran and its regional agenda, a new Middle East crisis erupted. The rift between Qatar and its Gulf Cooperation Council (GCC) partners threatens to have far-reaching geopolitical implications.

On June 5, the governments of Saudi Arabia, the United Arab Emirates (UAE), Bahrain, Egypt and Yemen severed diplomatic ties with Qatar over allegations that Doha is supporting terrorism and embracing Iran and its regional agenda. The bloc, which harbors long-standing grievances against Doha over its ideological and financial support for various regional Islamist groups, including providing shelter to Hamas and Taliban officials, announced that Qatari diplomats would be expelled. Saudi, Emirati and Bahraini airlines piled on, announcing that all flights to and from Qatar would be canceled, with immediate ramifications for the thousands of Qatari pilgrims observing hajj in Mecca during the holy month of Ramadan. Qatar Airlines was also blocked from entering Saudi, Emirati and Bahraini airspace as the diplomatic crisis deepened throughout June 5. As Qatar’s only land border is with Saudi Arabia, rumors are swirling of impending GCC sanctions against Qatar. The threat of a potential shutdown of goods flowing into the emirate, including food and basic supplies, has sent thousands of panicked residents to the supermarkets.

The latest chapter in Qatar’s torturous relationship with its GCC allies began when the official Qatar News Agency quoted Emir Sheikh Tamim bin Hamad Al Thani as saying in an address to a graduation ceremony for new army recruits that Doha faced “tensions” with the Trump administration and acknowledged that Iran is an “Islamic power.”

The reporting, which Qatari officials outright denied and characterized as an unprecedented security breach caused by hackers, claimed the emir said, “There is no wisdom in harboring hostility toward Iran.” The emir also supposedly addressed the Palestinian-Israeli conflict and strategic relations with Iran and made favorable comments about the Palestinian Islamist group Hamas.

For Qatar, supporting regional Islamist groups has enabled it to carve out an independent foreign policy by moving out of the shadow of its mighty neighbor, Saudi Arabia. But in 2014, once Egypt’s Muslim Brotherhood government was deposed by its military, which Doha had generously bankrolled, coupled with Qatar’s support for Hamas and various Syrian Islamist groups that had failed to turn initial battlefield victories against the embattled regime of President Bashar al-Assad into strategic gains, Qatar quickly found itself marginalized, culminating in the eruption of the eight-month GCC-Qatar crisis of 2014. At the time, Saudi Arabia, the UAE and Bahrain also withdrew their ambassadors from Doha.

Nonetheless, Kuwaiti Emir Sheikh Sabah Al Ahmed Al Sabah successfully managed to broker a truce in the high-profile GCC dispute, but only after Doha began changing its foreign policy. These changes came shortly after the 2013 abdication of Sheikh Hamad bin Khalifa Al Thani in favor of his son, Qatar’s present ruler. During Tamim’s tenure, he has taken concrete steps to reduce Qatar’s support for regional Islamist groups, begging the question: Why are the old battles and long-standing grievances resurfacing now?

In the event that Qatar’s explanation that Tamim’s recently reported statement was indeed fake news created by hackers with hostile intentions, multiple scenarios should be considered.

If the hacking can be attributed to Iran as part of its effort to divide the GCC immediately after Trump’s address, during which he called for a unified regional approach toward isolating Tehran, it seems highly unlikely that the GCC would choose to subsequently escalate tensions with Doha by severing diplomatic relations as opposed issuing a swift statement of Arab unity, which it ultimately did once the 2014 row with Qatar was settled. If Iran was indeed behind the hack, it has succeeded beyond expectations with its quest to divide the GCC, as the rapidly unfolding Qatar crisis is arguably the most significant crisis in the Persian Gulf since the Gulf War of 1990.

A second possibility is that the hacking was done by either Riyadh or Abu Dhabi over their long-standing grievances over Qatar’s initial support for 2011's various Arab Spring movements, which in their eyes have not only worsened instability and chaos across the Middle East at the price of widespread death and destruction, but enabled Iran’s rise as a regional power.

If either Riyadh or Abu Dhabi was behind a fabricated Tamim statement, it is also plausible that Qatar retaliated by orchestrating the leak of the emails of UAE’s ambassador to Washington, Yousef Al-Otaiba, that exposed discussions with various neoconservative organizations centering on Doha’s support for Hamas and other extremist groups.

Qatar, meanwhile, has requested the assistance of the US Federal Bureau of Investigation to investigate.

Adding to the complexity is the recent call by various American foreign policy players and prominent members of Washington’s think-tank community to remove the United States’ al-Udeid air base from Qatar over Doha’s alleged support for extremism.

Some have even suggested that the US air base, from which the US-led coalition to defeat the Islamic State carries out operations, should be relocated to the UAE, driving Qatari paranoia that the UAE is leading an attack against it in Washington with potentially devastating implications. These dynamics have triggered numerous conspiracy theories floating on Twitter and throughout the blogosphere, including that there is somehow an Israel connection.

Another possibility, of course, is that Tamim’s statement was accurately reported and given the regional turmoil, Qatar’s independent foreign policy can no longer be tolerated as it could bring turmoil to the GCC.

Given the ferocity of the diplomatic escalations coupled with the potential of punitive economic measures against Doha, the Qatar crisis is unlikely to subside soon. In another worrying sign, whatever happened, the new cyber dimension adds another alarming element to the unfolding GCC crisis, underscoring how unpredictable and dangerous this conflict has become.

If anything, it could be argued that Trump’s uncompromising rhetoric against extremism and Iran in particular have emboldened Doha’s regional rivals to settle scores that date all the way back to the eruption of the Arab Spring.