Qatar visit to the US aims to break Gulf gridlock

Qatar is using a high-level visit to Washington to get the Donald Trump administration’s support to broker a deal to end the monthslong Saudi-led embargo. 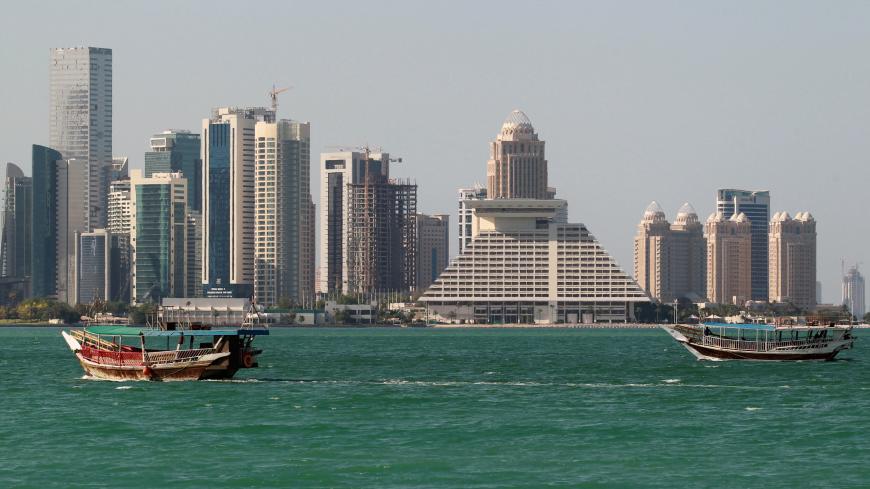 Qatar hopes a high-level visit to the US capital can help break the Saudi-led embargo that has hobbled the tiny emirate for the past seven months.

A contingent of Cabinet officials, including the foreign, defense and finance ministers, are fanning out throughout Washington this week in a series of events headlined by a bilateral dialogue on Tuesday.

Qatari officials are hoping to use the visit to set up talks to end the stalemate. Since June, Saudi Arabia and three other Arab states have imposed an economic embargo on Qatar until it meets demands to shut down the Al Jazeera news channel, sever diplomatic ties to Iran and cease alleged support for Islamist groups such as the Muslim Brotherhood, Hezbollah and the Islamic State (IS).

“The only person who can solve the GCC [Gulf Cooperation Council] issue is President Trump,” Qatari Minister of State for Defense Khalid bin Mohammad al-Attiyah said at a Heritage Foundation forum today. “He can solve it in a phone call.”

Soon after Saudi Arabia launched the blockade last year, Trump invited Qatar’s Emir Tamim bin Hamad Al Thani to the White House for talks aimed at ending the embargo. The visit never happened, but now a Qatari official confirmed to Al-Monitor that “there are discussions” about setting up a visit this year, possibly in the spring.

US officials are also trying to push for a GCC meeting at Camp David later this spring, an idea that first surfaced last year, two sources told Al-Monitor. President Barack Obama hosted an inaugural US-GCC summit at Camp David in 2015, with a follow-up meeting a year later in Riyadh.

US Secretary of State Rex Tillerson’s visits to the region in July and October yielded little visible progress.

And a Kuwait-led effort to get the six-nation group together in December stalled when Saudi Arabia and the United Arab Emirates dropped out, citing plans to start their own regional bloc.

Tillerson, along with US Defense Secretary James Mattis and Treasury Secretary Steven Mnuchin, are expected to use the US-Qatar Strategic Dialogue on Tuesday to forge bilateral deals on military cooperation, investment and human trafficking. The dialogue could also help grease the wheels for GCC-wide talks.

That impression was further reinforced over the weekend with reports that Qatar Airways has agreed to adopt transparent accounting standards and not run any flights to the United States through other countries, a major bone of contention for US carriers, which accuse their Gulf rivals of getting unfair government subsidies. The deal is expected to be publicly announced at Tuesday’s summit.

Defense Department spokesman Adrian Rankine-Galloway told Al-Monitor that the gathering will also focus on the US-led campaign against IS in Iraq and Syria, as well as the Gulf dispute.

Qatar hosts forward headquarters for US Central Command as well as 11,000 US troops at al-Udeid air base, which supports B-52 flights against IS in Iraq and Syria and houses the hotline used to deconflict US and Russian air operations in Syria. Attiyah said today that Qatar plans to expand the base — the largest American installation in the region — to provide more housing for military families. Qatar also plans to offer the US Navy access to two new ports, Attiyah said.

“For Doha, it’s all about the boycott,” said Hussein Ibish, senior resident scholar at the Arab Gulf States Institute in Washington. “American leverage is one of the main [cards] they have to play.”

The weeklong trip will also give the Qatari Cabinet a chance to get much-needed face time with National Security Council members and lawmakers to rally influential US policymakers, including Trump, to their cause.

After the Gulf blockade broke out in June just weeks after Trump’s visit to Saudi Arabia, the US president took to Twitter and appeared to publicly chastise Qatar for funding terrorism. While Tillerson and Mnuchin pushed for closer cooperation with Doha amid the monthslong crisis and Mattis made an unannounced trip to al-Udeid in September, White House national security adviser H.R. McMaster said in December that Qatar had taken on a “new role” as a leading sponsor of terror in the Middle East.

For Qatar, which inked deals with the US Justice and Treasury departments to fight terrorism last year, bridging divides with the US administration will be key to a successful visit that lays the groundwork for a broader diplomatic solution.

“Some of it is just taking a temperature check on the relationship,” said Andrew Bowen, a visiting scholar at the American Enterprise Institute, a conservative Washington think tank. “The bigger sell will be convincing people in Congress and [the White House] that Qatar is a strategic partner that shares [US] interests.”

That perception has again been tested in recent days, as Qatari officials confirmed they have looked into purchasing the Russian S-400 surface-to-air missile system, despite purchasing $21 billion worth of US-made F-15 fighter jets just last summer.

Chief Defense Department spokeswoman Dana White characterized Qatar’s reported purchase as a “sovereign decision” in a briefing last week. The move, however, could run into trouble because of a newly passed US law that threatens sanctions against buyers of Moscow’s weapons.