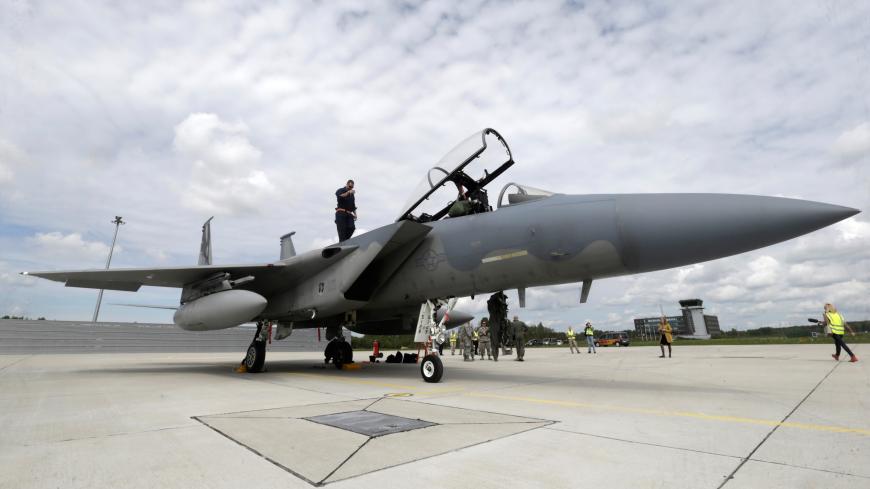 A specialist inspects a US Air Force F-15 Eagle fighter after a certification of the arresting gear at a military air base in Lielvarde, Latvia, May 19, 2016. - REUTERS/Ints Kalnins

Through its Washington lobby firm Husch Blackwell, the emirate has been informing lawmakers that a $6.2 billion contract signed in December for 36 F-15s could be “jeopardized” if the bill from Rep. Brian Mast, R-Fla., becomes law, according to lobbying records reviewed by Al-Monitor. The issue is expected to come up when Emir Tamim bin Hamad Al Thani visits Washington next month ahead of a possible Camp David summit to end the monthslong Saudi-led blockade of Qatar.

Mast’s bill would allow the Donald Trump administration to slash defense sales and exports and freeze credit or loan guarantees above $10 million to backers of Hamas, which the United States considers a terrorist organization. The chairman and top Democrat on the House Foreign Affairs Committee both support the bill, which alleges that Hamas has received “significant financial and military support” from Qatar.

“Qatar seems genuinely concerned that the legislation could be part of a ‘slippery slope’ that could lead to actions that would harm their relationship with the US,” said William Hartung, director of the Arms and Security Project at the Center for International Policy. “[That’s] evidenced by their statement on the bill and their decision to play the ‘jobs card’ in opposing it.”

Over the past three years, Qatar has purchased nearly $23 billion in US defense equipment, including F-15 aircraft, Apache helicopters, Patriot Pac-3 missile defenses and engines for C-17 transport planes. The State Department approved a $1.1 billion contract to support Qatar’s F-15 jets last year despite a pledge from Senate Foreign Relations Committee Chairman Bob Corker, R-Tenn., to block arms sales to the Gulf pending a resolution of the blockade.

More than 11,000 US troops are based at al-Udeid air base, home of US Central Command’s forward headquarters in the Middle East and the Pentagon’s air operations center for Iraq, Syria and Afghanistan. During a recent US visit, Qatari Defense Minister Khalid bin Mohammad Al Attiyah promised to expand the base by more than 200 housing units, giving more American service members and their families the ability to deploy there permanently.

Qatar spent $3.64 million on lobbying the US government in 2016, according to Al-Monitor's review of Justice Department records. A delegation that included the country’s foreign and defense ministers visited Washington in January, meeting Defense Secretary James Mattis and Secretary of State Rex Tillerson and pledging to fight extremism and boost trade.

Mast introduced his bill in May 2017. It cleared the House Foreign Affairs Committee in November. While the proposed legislation hasn’t been brought up on the floor, Qatar has upped its lobbying push to stop the bill’s progress.

“The Qataris seem to have a stay of execution on this,” said Jonathan Schanzer, senior vice president of the Foundation for Defense of Democracies in Washington. “They have an opportunity to set things straight.”

The legislation would not impose sanctions on Qatar unless the Trump administration determines that Doha has funded Hamas — an unlikely proposition given US reliance on its Gulf ally.

Moreover, Trump himself may be unlikely to jeopardize weapons exports as he seeks to tweak US rules to allow American arms makers to easily sell guns and ammunition overseas. The United States has more than 90 outstanding State, Defense and NASA contracts in Qatar, according to federal government procurement records, including for bombs, guided missiles and aircraft.

“President Trump has routinely touted the jobs created by overseas arms sales, and would likely resist doing anything that would cancel or interrupt a major deal,” Hartung told Al-Monitor. “Add to that the critical role of al-Udeid to US operations in the region and it seems unlikely that the Trump administration would make a determination that Qatar is materially supporting Hamas.”