Lawmakers are threatening sanctions against US allies that support Hamas. 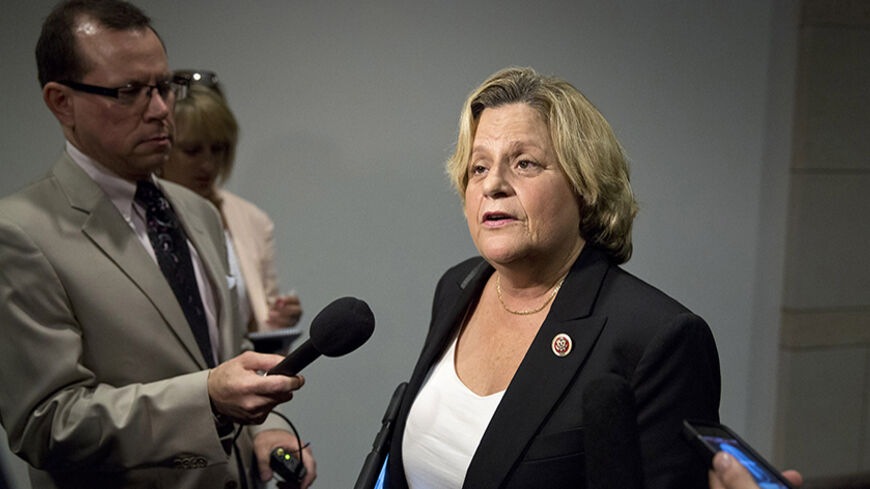 Ileana Ros-Lehtinen, the Republican congresswoman from Florida, speaks to the media before attending a closed meeting for members of Congress on the situation in Syria at the US Capitol in Washington, Sept. 1, 2013. - REUTERS/Joshua Roberts

Congress delivered its staunchest warning to date on Sept. 9 that Turkey and Qatar could face financial and other penalties if they continue to support Hamas and other US-designated terrorist organizations.

Frustration that had been mounting for months if not years boiled over as lawmakers returned from an August recess marked by the conflict in Gaza. During a hearing on "Hamas' benefactors," members of both parties agreed with witnesses who described the two countries as US "frenemies" and endorsed calls for a much tougher line.

"We must make our message clear: If you help finance Hamas, there will be significant consequences and they will be unpleasant," said Rep. Ted Poe, R-Texas, chairman of the House Foreign Affairs panel on terrorism. "I hope Qatar and Turkey are listening."

Rep. Ileana Ros-Lehtinen, R-Fla., said she agreed with the "frenemies" characterization. "It's a descriptive grabber," the chairwoman of the Middle East and North Africa subcommittee told Al-Monitor. "I worry that it makes light of it, but that's not the intent. It's capturing the complex relationship we have with our so-called allies."

The two countries are accused of taking over as the main foreign patrons for Hamas after Iran and the Sunni organization had a falling out three years ago over its support for rebel fighters seeking to dislodge Tehran ally Bashar al-Assad in Syria. Qatar hosts Hamas leader Khaled Meshaal and has pledged $400 million in infrastructure funding for Hamas; Turkish leader Recep Tayyip Erdogan, meanwhile, allegedly pledged $300 million to the Hamas government in Gaza when he was prime minister and is close to the organization ideologically.

Jonathan Schanzer, of the hawkish and influential Foundation for Defense of Democracies, said the Treasury Department should slap new sanctions designations on Turkish and Qatari individuals and entities. Treasury Department officials are scheduled to brief congressional staff about Hamas sanctions on Friday, a congressional aide told Al-Monitor, and Turkey and Qatar are expected to be top topics of debate.

"With Qatar and Turkey we have not even begun to call them out," said Schanzer. "Up until now it's been the quiet approach, asking them nicely. That has not worked."

The Treasury Department points out that it has repeatedly — and publicly — denounced Qatar's support for Hamas, notably in a March 4 speech by Undersecretary for Terrorism and Financial Intelligence David Cohen. The department has also sanctioned a number of secondary Qatari and Turkish entities and individuals over the years, notably in the latest round of Iran sanctions announced last month.

Schanzer urged Congress to put a hold on a pending $11 billion arms deal with Qatar as well as arms sales to Turkey. And he said Congress could start exploring alternatives to the US air base at al-Udeid in Qatar; he told Al-Monitor that the United Arab Emirates, Bahrain and Iraqi Kurdistan have all quietly made it known that they may be interested in hosting US military forces if the Obama administration were to reduce the US presence in Qatar.

"Having that assessment done, either by the GAO [Government Accountability Organization] or the Pentagon, I think would send the exact right message to the Qataris that they will not enjoy the protection of the United States forever so long as this relationship continues with Hamas," Schanzer said.

"I think your recommendations are spot-on," said Rep. Ted Yoho, R-Fla. "And we will promote introducing those as far as legislation."

Others, however, worried that US leverage isn't as great as it may seem — especially at a time when both Qatar and Turkey can be expected to play key roles in the anti-Islamic State strategy that President Barack Obama is expected to unveil Wednesday evening.

"Policymakers should be realistic," testified Steven Cook of the Council on Foreign Relations. "Registering American disapproval over the relationship between Qatar and Hamas and Turkey and Hamas is unlikely to alter policies in Doha or Ankara. These ties serve both Qatari and Turkish regional interests."

Cook said Turkey's ruling Justice and Development Party (AKP) has close ideological ties with the Muslim Brotherhood and its Palestinian offshoot, Hamas. He argued that Qatar, by contrast, supports similar groups as a way to establish its independence from the much larger Saudi Arabia and other Gulf countries.

Those concerns registered with Rep. Gerald Connolly, D-Va., a leading member of the congressional Turkey Caucus. Connolly pointed out that when he co-authored a private letter to Erdogan over the summer admonishing him for his anti-Israel vitriol, Erdogan ended up using the letter in his presidential bid.

Geopolitical considerations aside, however, most members of the committee appear to think terrorism financing demands a clear response from Congress.