Army Secretary Mark Esper, auditioning for the Pentagon’s top job Tuesday, called on allies to join the United States in fighting Iranian malfeasance in the Gulf. 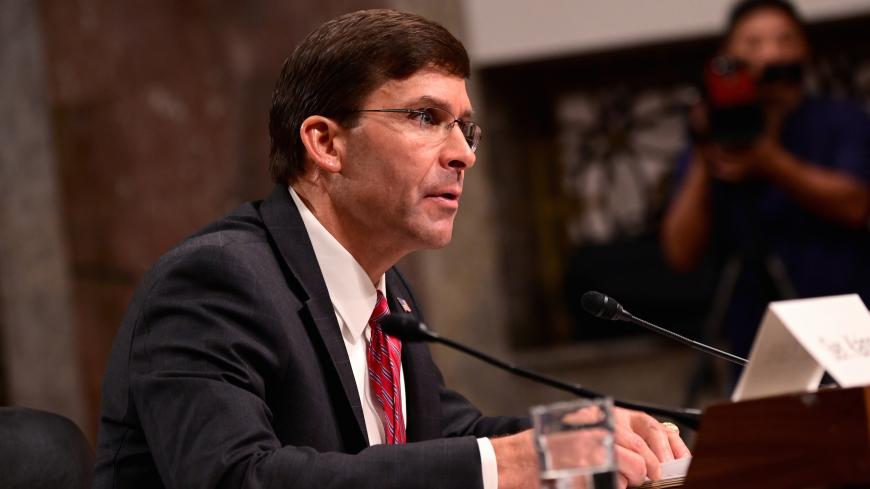 US President Donald Trump’s pick to succeed Jim Mattis as the Pentagon’s permanent chief insisted Tuesday that passive patrols of the Gulf were deterring Iranian attacks on tankers after an uptick in tensions in the region in recent months.

Army Secretary Mark Esper said at a confirmation hearing Tuesday that the Trump administration continues to pursue a 20-nation maritime coalition in a ramped-up surveillance mission that would aim to "foreclose the opportunity for any miscalculation and misunderstanding” by passive patrolling in the Strait of Hormuz and Gulf of Oman “to deter any provocative acts."

The program, he said, would provide “escorts and sentries” to vulnerable vessels, after the Trump administration fingered Iran for an attack on Norwegian and Japanese vessels last month.

Esper said that after an Iranian boat forced a British-owned oil vessel into territorial waters last week, the arrival of a UK warship helped defuse tensions. “That’s the type of concept we’re trying to envision,” he added.

Meanwhile, the United States is seeking a “verifiable, irreversible prohibition” on Iran’s nuclear and ballistic missile work, floating fresh talks without preconditions. “I do think we need to get back to negotiation path with them, preferably an updated version of JCPOA," Esper said, using an acronym to refer to the 2015 nuclear deal.

Supporters of Esper, who comes into the job with long-standing relationships with national security adviser John Bolton and Secretary of State Mike Pompeo, say his 22-day turn as acting defense chief shows an increased willingness to get behind the administration’s Iran strategy. Esper's tenure as acting secretary of defense ended under US law Monday once he was formally nominated to be the nation's next defense chief.

The agency’s last permanent chief, Jim Mattis, had called for the United States to remain in the 2015 Iran nuclear deal to prevent Tehran from getting the bomb, and wasn’t kept in the loop when Trump decided to leave the pact in May 2018. Patrick Shanahan, when he was acting defense secretary, “was never really placed in a situation where he had to come out forcefully and defend the administration’s policies,” said Thomas Spoehr, a retired Army lieutenant general with the conservative Heritage Foundation. “Esper I think believes in the strategy and sees it as the right way to go.”

Esper insisted that tensions in the NATO alliance over Iran and other topics did not come up at a NATO meeting in Brussels last month. But the United States faces a credibility gap to prove Iranian links to recent attacks to skeptical allies, a former government official told Al-Monitor on condition of anonymity. They allies are confused about the administration’s goals for the pressure campaign against Iran and want to see a tangible signal that the Trump team is willing to come to the table for talks.

The task of holding Iran to uranium enrichment targets under the deal appears increasingly difficult, as Tehran went past two critical thresholds for uranium enrichment under the 2015 nuclear deal in the past month. Tehran has insisted that the United States lift sanctions before re-engaging in talks.

Meanwhile, the Saudi-led blockade of Qatar that has stretched on for more than two years continues to hamper efforts to get Arab allies involved in countering Iran because of UAE airspace restrictions on Qatari planes and the cancellation of programs where Saudi military officials worked at the US-led command center at al-Udeid air base in Qatar, the former government official said.

Speaking at the NATO summit last month as acting secretary, Esper promised to provide briefings for allies to identify Iran’s hand behind recent tanker attacks in the Gulf. Senate Armed Services Committee ranking member Jack Reed, D-Ri, complained that “it took the Department of Defense more than five days" to share information on the Pentagon's deployments to counter Iran.

Esper said he “clearly” shared Mattis’ views on the role of working with NATO allies after facing repeated questions from senators. If Esper publicly ties himself more closely than his predecessors to Trump’s pressure strategy, which Europe has sought to curtail, experts say Esper could invite doubts from allies.

“We’re going to need a [defense secretary] who doesn’t just say 'yes sir, yes sir, three bags full' in the Situation Room,” said Jim Townsend, who served as a deputy assistant secretary of defense for Europe until 2017 and worked with Esper when Esper previously served at the Pentagon during the George W. Bush administration. “He can’t be seen as such a loyalist that he’s not going to provide the guidance that the president needs to hear.”