US lines up partners to protect oil tankers after Gulf attacks

Gen. Paul Selva, the second-ranking US military officer, said today that the Donald Trump administration is asking for the help of Asian nations that import Gulf oil to help protect tankers from suspected Iranian attacks. 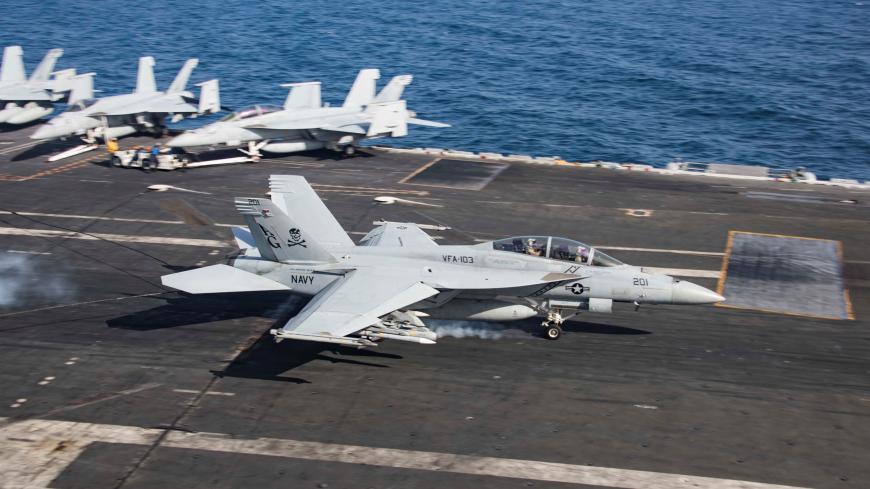 An F/A-18F Super Hornet makes an arrested landing on the flight deck of the US Navy Nimitz-class aircraft carrier USS Abraham Lincoln in the Gulf of Oman, May 22, 2019. - US Navy/Mass Communication Specialist 2nd Class Matt Herbst/REUTERS

The Donald Trump administration is calling on nations that import the bulk of oil from the Gulf to help protect freedom of navigation in the region after the United States blamed Iran for attacking shipping vessels.

The vice chairman of the Joint Chiefs of Staff, Gen. Paul Selva, said today that the Pentagon and State Department had approved plans to reach out to China, Japan, Singapore, South Korea, Indonesia and other oil importers about a possible response to defend tanker traffic. He did not offer any details about what those nations may be asked to do.

“This is a bigger problem than the free flow of oil,” Selva told a group of defense reporters. “It’s a country taking unilateral action. I think there is a military role in defending freedom of navigation. The question will be to what extent the international community will get behind that role.”

But the Pentagon’s planning appeared to be further scrambled today when President Trump announced that Shanahan’s presumptive nomination to be defense secretary would not be moving forward, following media reports of domestic violence allegations from a former marriage. Army Secretary Mark Esper, a former Raytheon lobbyist, will assume the role on an acting basis, Trump said.

After Germany and Japan asked the United States for further evidence of Iran’s role in the attacks, the Defense Department released nearly a dozen new images on Monday that appear to depict blast damage to Norwegian and Japanese vessels hit in the Gulf of Oman last week. The Pentagon said the images confirm that the attacks were carried out by the Islamic Revolutionary Guard Corps' navy through the use of limpet mines spotted by US military helicopters.

Selva said it was “very likely” Iran knew about the identity of the vessels before launching the small boat attacks because of their nationality and proximity to Tehran’s shoreline. “They made a tactical and operational level choice," he said, likely involving Quds Force commander Qasem Soleimani.

The Trump administration announced Monday that it was sending 1,000 more US troops to the region to deal with the rising threat from Iran. But Selva and acting Defense Secretary Patrick Shanahan insisted that the fresh US forces, including intelligence, surveillance, and reconnaissance and maintenance, are strictly for support and will serve in a “defensive role.”

The Defense Department had previously extended the tours of 600 soldiers manning Patriot batteries in the region and brought in 900 new troops along with the deployment of the USS Abraham Lincoln carrier strike group and a bomber group.

The United States has also upped diplomatic pressure on Iran. Selva, who is set to retire in July, said the Trump administration had sought to send a simple message to Iran through public statements and Iraqi and Swiss diplomats: “Don’t come after our forces.”

Pompeo — the first US official to publicly point the finger at Iran in the attacks on Norwegian and Japanese vessels — also spoke to his counterparts in the United Arab Emirates, Kuwait and Qatar before his visit to US Central Command headquarters in Florida today.

“I think that we have seen the international community and our allies step up to condemn this behavior,” State Department spokesperson Morgan Orgatus said at a briefing on Monday. “What we’re seeing in the Strait of Hormuz defies the pattern — the tenets that we all hold dear as it relates to freedom of navigation.”

After Iran announced plans to violate the 2015 nuclear deal by increasing its stockpiles of low-enriched uranium on Monday, Trump signaled in an interview with Time that he’d be willing to go to war with Iran to stop Tehran from getting a nuclear weapon. The State Department called for Iran to comply with the pact, though Trump withdrew from it more than a year ago.

Yet even as the State and Defense Departments try to rally support for military coordination, Trump also dismissed the tanker attacks as “very minor” and said he would keep “a question mark” on whether the United States would respond militarily to protect shipping in the Gulf.

Selva for his part characterized the pause as a “relatively small interruption” in the Strait of Hormuz.