Secretary of State Mike Pompeo points finger at Iran in Thursday's attacks on two tankers in the Gulf of Oman. 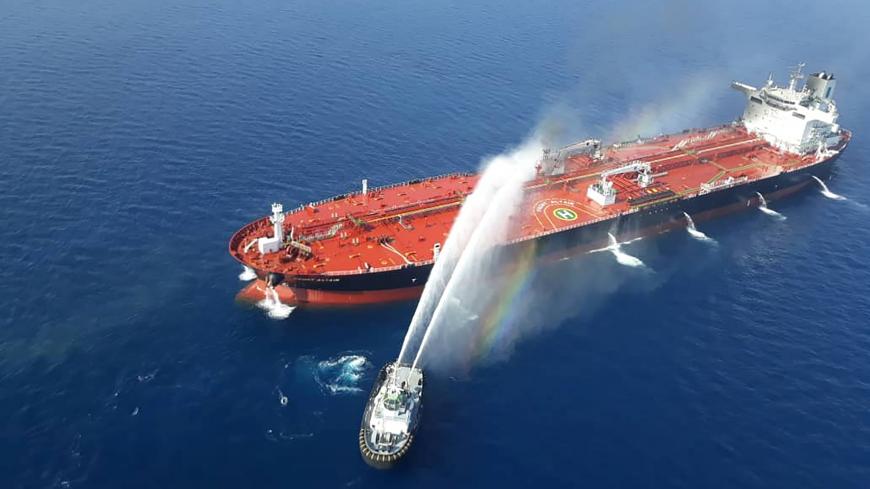 An Iranian navy boat tries to put out a fire on an oil tanker after the tanker was attacked in the Gulf of Oman, June 13, 2019. - Tasnim News Agency/via REUTERS

US Secretary of State Mike Pompeo pinned attacks on two tankers in the Gulf of Oman on Iran Thursday, just hours after the Pentagon deployed a nearby destroyer to assist victims of the blast.

In brief remarks at the State Department, the top US diplomat insisted that only Tehran was capable of launching the attacks that incapacitated Norwegian and Japanese shipping vessels.

“It is the assessment of the United States government that the Islamic Republic of Iran is responsible for the attacks in the Gulf of Oman today,” Pompeo said. “These attacks are a threat to international peace and security, a blatant assault on the freedom of navigation and an unacceptable escalation of tension by Iran.”

Pompeo, who presented no hard evidence and left the podium without taking questions from the press, said Tehran was acting out on an April promise to shut down the Strait of Hormuz in an effort to see “our successful maximum pressure campaign lifted.” Pompeo said acting US envoy to the United Nations Jonathan Cohen would raise the attacks in a Security Council meeting Thursday.

The secretary did not make clear whether the Donald Trump administration would respond diplomatically or militarily to the attacks, which came as Japanese Prime Minister Shinzo Abe was meeting with Iranian President Hassan Rouhani in a bid to lower US-Iranian tensions. Gen. Frank McKenzie, the top US military commander in the Middle East, told The Wall Street Journal he was considering asking the Pentagon to send more assets to the region.

The United States has insisted in recent weeks that it is willing to engage Iran in talks without preconditions. But Trump poured cold water on any new diplomatic push today.

“While I very much appreciate P.M. Abe going to Iran to meet with Ayatollah Ali Khamenei, I personally feel that it is too soon to even think about making a deal,” Trump tweeted after the attacks. “They are not ready, and neither are we!”

White House ally Sen. Marco Rubio, R-Fla., fingered the elite Quds Force in the attack, adding that it has “created a very dangerous situation in the region.” Other Iran hawks called for robust pushback.

“They need to feel pain for this escalation and additional sanctions would be the appropriate response,” said Sen. Lindsey Graham, R-S.C.

Today’s attacks forced a quick response from the Pentagon. US Central Command spokesman Lt. Col. Earl Brown said in a statement that the guided missile destroyer USS Bainbridge, which was nearby at the time of the attack, responded to a distress call from one of the vessels, taking aboard 21 crew members.

Brown also said the Navy had sent a P-8 Poseidon surveillance aircraft to assess the situation. Meanwhile, CNN reported that US crews spotted an unexploded limpet mine alongside one of the damaged vessels.

Top Pentagon officials had indicated in recent days that threats from Iranian proxies in the Gulf had stabilized after a maritime threat caused concern in the Trump administration that attacks on US forces in the region could be coming. Kathryn Wheelbarger, the acting assistant secretary of defense for international security affairs, told an Al-Monitor breakfast Tuesday that the deployment of 1,500 troops to the region along with a carrier strike group and a suite of bombers had led to “maybe an operational pause” from Iran.

The original deployment, she said, was prompted by an attack on tankers off the coast of the United Arab Emirates last month that the UN was told was state-linked.

Even as the Trump administration was quick to link the latest attack to Iran, advocates of keeping the 2015 nuclear deal alive said Tehran’s possible motivations for the strike were not clear.

“Are there state or non-state actors that have an interest in provoking a conflict between [Tehran] and the US?” former Swedish Foreign Minister and international diplomat Carl Bildt asked on Twitter. “It is difficult to see any other motive behind the tanker attack.”