After the United States accused Iran of being behind the attacks on tankers in the Gulf of Oman, Tehran accused Washington of "sabotage diplomacy." 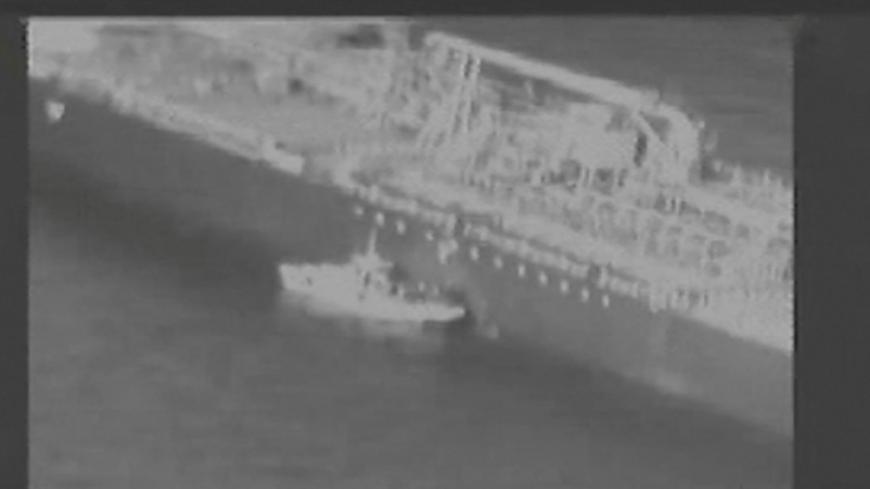 A still image taken from a US military handout video purports to show Iran's Revolutionary Guard Corps removing an unexploded limpet mine from the side of the Kokuka Courageous Tanker, June 13, 2019. - US Military/REUTERS

The June 13 attack on two tankers in the Gulf of Oman has pushed tensions between Iran and the United States to new heights, raising concerns that the region risks a repeat of the infamous tanker war.

Hours after the incident, US Secretary of State Mike Pompeo blamed Iran for the attacks on the Norwegian and Japanese tankers. “This assessment is based on intelligence, the weapons used, the level of expertise needed to execute the operation, recent similar Iranian attacks on shipping and the fact no proxy group operating in the area has the resources and proficiency to act with such a high degree of sophistication,” Pompeo said. The US Navy released grainy black-and-white video of what it claims was an Islamic Revolutionary Guard Corps boat approach one of the tankers to remove a mine that had not exploded.

The video, however, was far from conclusive and left many unanswered questions. Complicating matters more, the Japanese ship owner contradicted the US version of the attacks. Yutaka Katada said that a flying object and not a mine had caused the explosion. “The impact was well above the water,” Katada said.

Iranian Foreign Ministry spokesman Abbas Mousavi called the attacks on the tankers “suspicious,” given that they occurred exactly when Japanese Prime Minister Shinzo Abe was meeting with Iran’s Supreme Leader Ayatollah Ali Khamenei in Tehran for a historic visit, the first by a Japanese leader since the 1979 Islamic Revolution. Mousavi added that such incidents run contrary to Iran’s efforts to “reduce tensions in the region.” Iran’s Foreign Minister Mohammad Javad Zarif also initially called the attacks “suspicious.” After Pompeo’s comments accusing Iran, Zarif tweeted, “That the US immediately jumped to make allegations against Iran — w/o a shred of factual or circumstantial evidence — only makes it abundantly clear that the #B_Team is moving to #PlanB: sabotage diplomacy — including by @AbeShinzo — and cover up its #EconomicTerrorism against Iran.”

Regarding the presence of Iranian boats in the Gulf of Oman, Hamid Baeidinejad, Iran’s current ambassador to the United Kingdom and a former nuclear negotiator, tweeted, “Iran’s Embassy informed the International Maritime Organization in London of the details of rescue operations by the closest port authority in Iran to safely evacuate 44 crews of the two ships on fire in the Sea of Oman, after the Iranian port authority received distress signals.” The Pentagon claimed that the crew of the Norwegian-owned tanker was taken by Iran after being rescued by a different merchant vessel. Iranian state TV showed a clip of the crew watching Iranian state TV news about the event. The Russian Embassy in Tehran said that the crew will fly from Bandar Abbas in Iran to Dubai and then to Russia.

Iran’s ambassador to Denmark, Morteza Moradian, linked the accusations against Iran on the tanker attacks to other accusations against Iran in recent years. “Alleged attack plot in #France while #Iran president in Zurich; Alleged terror plot in #Denmark when #Europe about to announce #INSTEX; attacks on oil tankers when #Japan PM in Iran,” he tweeted. “World not fooled by #deceitful_scenarios. Who gains from these scenarios? #B_Team.”

The reference by Iranian officials to a "B-team" was coined by Zarif for the Saudi, Israeli, US and UAE regional alliance against Iran. In response to the accusations, UAE Foreign Minister Anwar Gargash tweeted that Zarif’s reference to a B-team was "farcical,” adding, “De-escalation in current situation requires wise actions not empty words.”