Iran: UAE sabotage incident should be no excuse for US ‘adventurism’

Iran has dismissed President Donald Trump’s offer to talk on the phone, saying if it was genuine, he would have stuck to the nuclear deal. 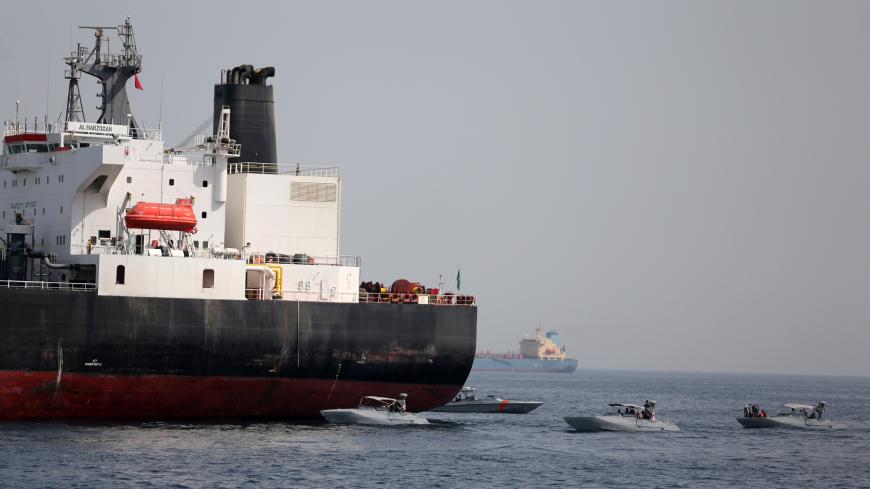 UAE navy boats are seen next to al-Marzoqah, a Saudi Arabian oil tanker, off the Fujairah port, UAE, May 13, 2019. - REUTERS/Satish Kumar

The United Arab Emirates said May 12 that four commercial ships were subjected to sabotage operations in the Gulf of Oman off the port of Fujairah. Saudi Energy Minister Khalid al-Falih said May 13 that two of the targeted ships were Saudi oil tankers, one of them about to pick up a load for delivery to the United States. While there were no casualties, two of the ships did suffer structural damage.

The incident comes after the United States announced it was sending an aircraft carrier to the Persian Gulf due to alleged threats from Iran. While the deployment was reportedly routine, the announcement by national security adviser John Bolton, as well as official US reports warning of an attack by Iran, have raised tensions to an unprecedented level under the Donald Trump administration. No UAE or Saudi official has pointed the finger at Iran. However, Abdul Khaleq Abdullah, a UAE professor and adviser to Crown Prince of Abu Dhabi Mohammed bin Zayed, tweeted that Iranian culpability is likely given that Iranian-backed media were the first to report the incident.

Iranian reactions have been mixed. Heshmatollah Falahatpisheh, the head of Iran’s influential foreign policy and national security commission, commented on the fragile security of Arab states in Persian Gulf, tweeting, “The explosions of Fujairah showed that security in the south of the Persian Gulf is [made of] glass.” In contrast, Foreign Ministry spokesman Abbas Mousavi referred to the incident as “worrying and unfortunate” and called for an investigation. In an indirect reference to the United States and its Arab allies in the Persian Gulf, Mousavi warned against using the incident as an excuse for “adventurism from foreign elements” that would disrupt stability and security in the region.

Not all Iranian officials readily accepted the UAE and Saudi version of the incident. Iranian parliament member Mostafa Kavakebian said May 13 that reports of the attack on two Saudi oil tankers are “suspicious and we reject them.” It is not clear on whose behalf he was speaking.

On May 9, the White House asked the Swiss Embassy — which serves as the US diplomatic representative in Iran since relations were cut after the 1979 Islamic Revolution — to give the leaders in Tehran its number to call and discuss rising tensions and other issues. During a previous press conference, Trump said, “What I’d like to see from Iran, I’d like them to call me.” Majid Takht-Ravanchi, Iran’s ambassador to the United Nations, dismissed the offer, saying there are no guarantees that the United States would stick to another nuclear agreement after Trump violated the first agreement nearly one year ago.

Trump vowed during his campaign to withdraw the United States from the Joint Comprehensive Plan of Action between Iran and the five permanent members of the United Nations Security Council plus Germany and the European Union. The deal diminished Iran’s nuclear capabilities in exchange for sanctions relief. After the US exit, sanctions were reapplied. However, Iran has so far maintained its commitment to the nuclear deal.

Foreign Minister Mohammad Javad Zarif also responded to Trump’s offer for a phone call. Tweeting at Trump’s handle to ensure he would receive the message, Zarif wrote, “ICYMI, before you hired him, this was the plan that [John Bolton] and his #B_team cohorts had for Iran. A detailed blueprint for #FakeIntelligence, #ForeverWar and even empty offers for talks — only phone numbers were not included.” The tweet included four screenshots of a 2017 National Review article written by Bolton before he became national security adviser, outlining how to get the United States out of the nuclear deal. "B-team" is Zarif's moniker for the alliance between Bolton, Israeli Prime Minister Benjamin Netanyahu, Saudi Arabia Crown Prince Mohammed bin Salman and Abu Dhabi Crown Prince Mohammed bin Zayed.

Trump’s request for Iran to call was also a source of ridicule on Persian-language social media and prank calls to the Swiss Embassy.