Why Iranians doubt the seriousness of Trump's latest offer of talks

US President Donald Trump's latest offer of talks with Iran has grabbed more attention than his previous overtures, but Iranian political elites agree that the offer is not sincere. 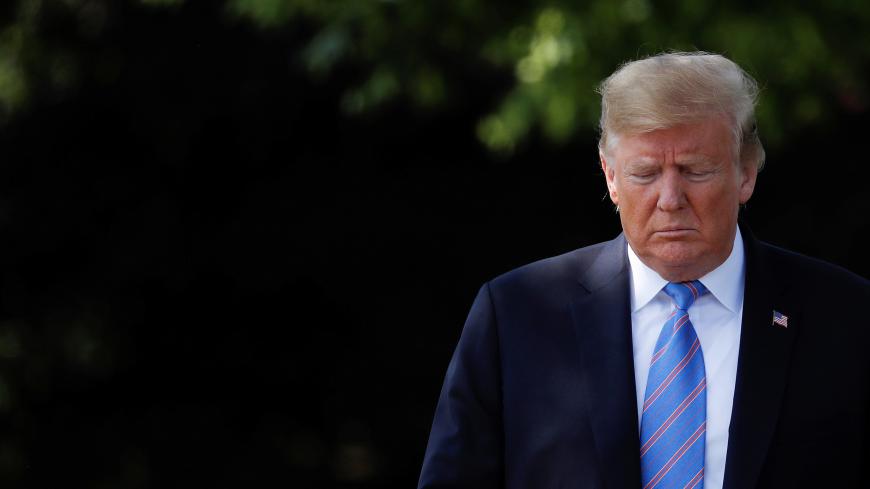 US President Donald Trump walks toward reporters to talk as he departs for travel to Louisiana from the White House in Washington, US, May 14, 2019. - REUTERS/Carlos Barria

President Donald Trump expressed a willingness to receive phone calls from Iranian authorities on May 9, an apparent move to open dialogue with Iran only one month after his administration designated the Islamic Revolutionary Guard Corps a "foreign terrorist organization." Tensions have simmered in past weeks, during which the United States deployed a Navy strike group and a bomber task force to US Central Command. According to US national security adviser John Bolton, the move was meant "to send a clear and unmistakable message to the Iranian regime that any attack on United States interests or on those of our allies will be met with unrelenting force."

Two days later, on May 8, the anniversary of the US withdrawal from the Joint Comprehensive Plan of Action, Trump imposed a fresh set of sanctions on Iran, this time targeting the country's industrial metals sector.

This open hostility has left many in Tehran questioning the sincerity of Trump's offer for talks, with some interpreting it within the context of the carrot and stick policy that the United States has long pursued in its approach toward Iran. In later remarks, Trump accused former Secretary of State John Kerry of advising Iranians against responding positively to his offer for talks.

"All of a sudden he decided to leave the negotiating table," Majid Takht-Ravanchi, Iran's permanent representative to the United Nations, told MSNBC. "What is the guarantee that he will not renege again on the future talks between Iran and the United States?" Deputy Foreign Minister Abbas Araghchi also noted that Trump's overture was no remedy for US-Iran tensions. "The Americans do have our number if need be," he said. Takht-Ravanchi and Araghchi were both senior negotiators in the talks that led to the signing of the Joint Comprehensive Plan of Action in 2015.

Aside from diplomats, Iran's political elite have showed little excitement toward Trump's gesture. "There are at least three 'career strike groups' on their way toward Iranian waters to be added to the United States 5th Fleet," Alireza Akbari, a former Iranian deputy defense minister (1997-2005), told Al-Monitor. "Four 52 bombers have already landed in Qatar while an F-35 stealth squadron has also been deployed to the region. There has been a surge of tens of thousands of US Marines to augment the scope of the US military personnel on Iran's doorsteps. Massive cargos and multiple strike and backup missiles are en route to the Persian Gulf."

According to Akbari, given the military buildup, Trump's offer is "a mockery of the idea of dialogue, and no sound mind would believe such an unwise remark."

During his April visit to New York, Foreign Minister Mohammad Javad Zarif dubbed a quartet of leaders the "B-Team": Bolton, Israeli Prime Minister Benjamin Netanyahu, Saudi Crown Prince Mohammed bin Salman and Abu Dhabi Crown Prince Mohammad bin Zayed. Zarif accusing the B-Team of pushing Trump toward a full-blown war with Iran — an argument that has been widely embraced by the Iranian elite. Bolton's record in threatening Iran, coupled with the level of hostility demonstrated by Secretary of State Mike Pompeo, has given rise to the theory that as long as these anti-Iran politicians remain influential in the Oval Office, the idea of a US-Iran compromise will lead nowhere.

Bolton is notorious among Iranian elites for his promotion of regime change in Iran and, even worse, his suggestions that the country be militarily attacked. They argue that Trump’s offer is but a political show, and Iran should be careful not to participate in it. To back up this argument, they refer to the June 2018 Singapore summit, where, amid a media frenzy, Trump sat down with North Korean leader Kim Jong Un. Nearly a year on, Trump's promises to lift sanctions on Pyongyang and improve the country's crumbling economy have proven empty. North Korean officials have now demanded that Pompeo be removed from the bilateral talks. The request has fueled concerns that, if similar US-Iran negotiations were launched, figures such as Bolton and Pompeo would also derail them.

Ali Vaez, the Iran project director at the International Crisis Group, told Al-Monitor, "If President Trump is serious about negotiating with Iran, he needs a change of guard and rhetoric … to demonstrate his ability to go around Bolton and other Iran hawks in his entourage." Vaez added that Trump "should appoint an envoy who has a record of having constructive dialogue with the Iranians."

Others in Iran who categorically reject closeness with the United States underline how Trump has failed to live up to his obligations, describing him as an unreliable partner. Former senior Iranian diplomat Mohammad Hassan Ghadiri Abyaneh said the US president "puts Israel's interests before those of his own country." In an interview with Al-Monitor, Abyaneh, who maintains close ties with Iranian President Hassan Rouhani's uncompromising opponents, argued that Iran does not need "to trust a president who has proven no compliance with any of the agreements the United States has signed."

Some Iranians, however, believe that any chance for diplomacy, no matter how small, should never be lost. Economist Saeed Leylaz said Iran "will not be losing anything by entering such talks. We can hold negotiations, even with the Trump administration, from a position of strength."

Yet Iranians continue to doubt the seriousness of Trump's offer of rapprochement, given the changes of heart that have characterized his presidency. The most recent example being Trump's unpredictable conduct in trade talks with China. If Trump was serious about a settlement with Tehran, they say, he could have exhausted diplomatic channels rather than grabbing headlines with a "political show."

Overall, the majority of Iran's political elite are treating Trump's latest overture as a public relations gesture that does not deserve to be considered as genuine. With warmongers deep inside Trump's inner circle, talks will bear no fruit.