Is one of Iran's top diplomats a member of Quds Force? 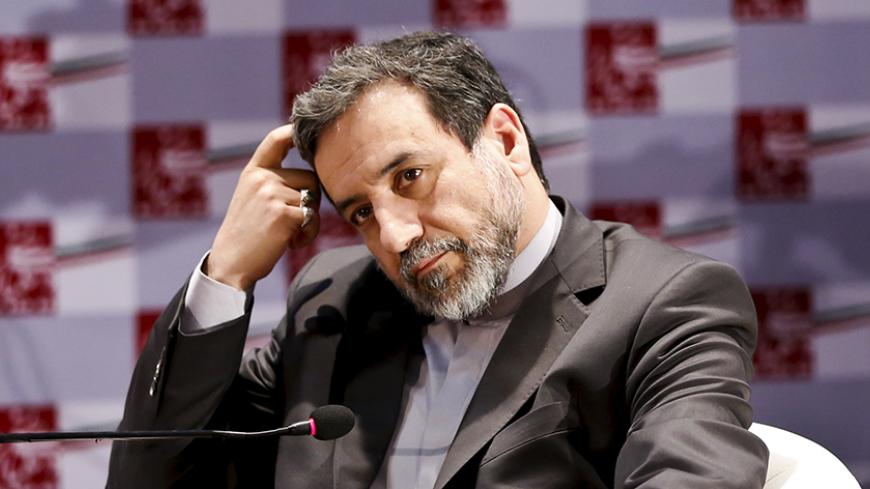 Abbas Araghchi, whose official title is deputy minister for legal and international affairs at Iran's Ministry of Foreign Affairs, is more signficiantly one of Iran's senior nuclear negotiators. While Foreign Minister Mohammad Javad Zarif played the lead role in the nuclear talks and received the majority of media coverage, Araghchi and his American and European counterparts played important roles in bringing about the landmark nuclear deal.

The English-speaking diplomat, who holds a doctorate from the University of Kent in Britain, has a well-known record as a diplomat in Iran's Foreign Ministry dating back 20 years. However, in a recent interview with an Iranian magazine, a former commander from the Islamic Revolutionary Guard Corps (IRGC) has introduced a controversial — and unverified — new aspect to Araghchi's background.

According to Javad Mansouri, one of the first commanders of the IRGC, Araghchi is a member of the IRGC's elite Quds Force, which is headed by Gen. Qasem Soleimani and is tasked with military operations outside Iran's borders. Mansouri made the claim in an interview with Iranian magazine Ramz-e-Obour (Password). Mansouri also said that Iran's ambassadors to Iraq, Syria and Lebanon are also members of the Quds Force. According to Mehr News, an "informed source" in the Foreign Ministry denied Mansouri's allegations and called them "baseless and far from reality."

That Iran's ambassadors to countries where Iran has a significant military presence would be members of the Quds Force is not necessarily surprising. But that one of Iran's top diplomats would be a member of an organization that is sanctioned by the United States and Europe, and whose members are restricted from travel to certain countries, has caught even some Iranian media outlets by surprise.

Reformist newspaper Ghanoon condemned Mansouri's comments on Araghchi in an articled headlined, "They targeted Zarif's wings." The Ghanoon article wrote that conservative critics of Zarif, Araghchi and deputy Foreign Minister Majid Takht-Ravanchi have consistently tried to derail one of the best diplomatic teams since the 1979 Islamic Revolution. The article continued that these efforts have hit a dead end, but now Mansouri's allegations, in a magazine opposed to the administration, pose a danger to the country. Given Mansouri's comments, Iran's enemies will use these "false claims" and foreign delegations may request that Araghchi no longer be involved in ongoing negotiations over the implementation of the nuclear deal.

Araghchi himself has not responded to the allegations. He was accompanying Zarif and other members of Iran's nuclear negotiation team to Norway and Germany when the story broke. While in Norway, Zarif and US Secretary of State John Kerry reportedly met for over an hour behind closed doors. Hossein Jaberi Ansari, spokesman for Iran's Foreign Ministry, said that while the two discussed the issues of Iraq, Syria and Yemen, the primary focus of the meeting was negotiations on the nuclear deal.

Takht-Ravanchi, along with Araghchi, also met with European Union deputy foreign policy chief Helga Schmid to discuss the remaining financial and banking restrictions on Iran. After years of very assertive US Treasury Department sanctions against countries that conducted business with Iran, along with remaining US sanctions on Tehran, investors and banks in Europe that seek to do business in Iran are still nervous. Some have speculated that the continued banking obstacles over the nuclear deal could even possibly cause the nuclear deal to unravel.