For Iran's foreign minister, winning an international prize may not be good news as hard-liners could use it as a pretext to attack him. 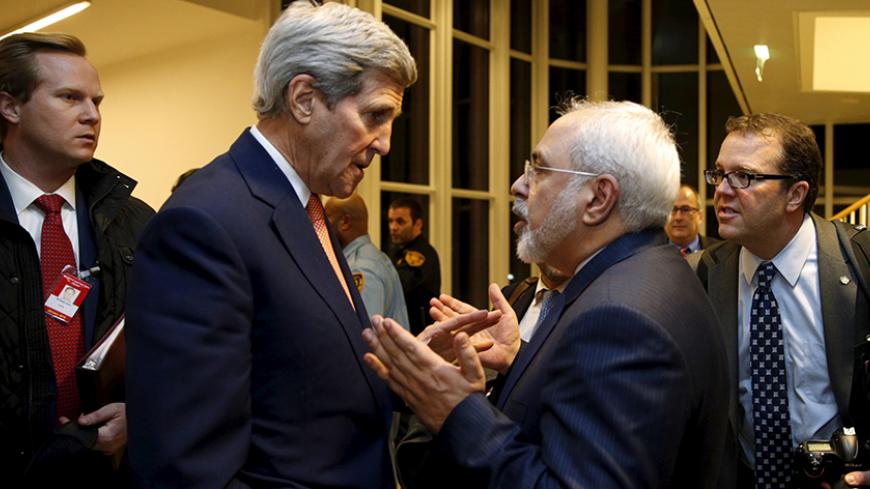 On Oct. 24, Iranian Foreign Minister Mohammad Javad Zarif and US Secretary of State John Kerry were announced as the winners of the annual Chatham House Prize for their role in striking a nuclear deal between Iran and the P5+1 (five permanent members of the UN Security Council plus Germany).

Iran’s Foreign Ministry spokesman Bahram Qassemi quoted Zarif saying, “This prize belongs to the Iranian nation.” Qassemi then stated that various institutions have asked Zarif to be a nominee for their prizes, but that he refused. “Chatham House doesn’t have this process and rule to ask individuals regarding this, and they nominate people without asking them. In Mr. Zarif’s case, this happened.” Qassemi also announced that Zarif would not visit London for the award ceremony due to his “tight schedule.”

Most of the prominent Reformist and moderate newspapers welcomed the news by covering it on their front pages Oct. 25.

Under the headline “The joint prize of Zarif and Kerry,” Reformist Shargh newspaper wrote that despite the opposition of the Board of Deputies of British Jews to Zarif’s speech at Chatham House last year, the managers of this think thank were not swayed.

However, unlike the Reformists and moderates, this prize did not make the conservatives happy and jubilant. Mehdi Mohammadi, a hard-line analyst and a member of Iran’s former nuclear negotiations team led by Saeed Jalili, wrote on his Telegram channel Oct. 24, “For the foreign minister of a country like Iran, [receiving] a joint prize with the most criminal foreign minister of the current world is a big shame. The big question looms here: Why are they giving this prize to Mr. Zarif? For what services? … I’m sorry that the JCPOA [Joint Comprehensive Plan of Action] had nothing for the nation, but it has had benefits for some.”

In other news, Deputy Foreign Minister Majid Takht-Ravanchi spoke about beginning negotiations with the European Union for “gradual and processed lifting of European Union human rights sanctions” against Tehran. Takht-Ravanchi, who was a senior negotiator during the nuclear talks that led to the nuclear agreement in 2015, told the Iranian Labour News Agency Oct. 24, “In the next two or three weeks, a delegation will be sent to Brussels for taking part in the human rights talks. This delegation consists of representatives from the Foreign Ministry and the judiciary.”

He emphasized, “We have a principle in the human rights talks [based on which] we say the human rights discussions shouldn’t get politicized and should be technical. In this round of talks, this principle will be observed.” Furthermore, Qassemi stated Oct. 24 that the talks will be held at the level of deputies of foreign ministers.

Reformist Hamdeli newspaper ran a report Oct. 25 under the headline “The start of human rights negotiations between Iran and the West.” It wrote, “Iran has decided that the other side in the talks on human rights would be Europe, not the United States. However, it seems that public opinion in Europe is more sensitive to human rights issues than US public opinion.”

Moreover, Ali Khorram, a former Iranian diplomat, published an op-ed on human rights discussions in the state-run “Iran” newspaper, writing, “If Iran’s old problems with the Europeans in regard to some issues including human rights get solved, [Iran] can gain significant political and economic advantages. In the absence of a bilateral relationship with the United States, Europe can turn into an important and reliable economic partner for Iran, and technology of the advanced countries of this continent would be a good alternative to American technology.”