Did Zarif really say it was a 'mistake' to trust Kerry?

Once again, Iranian hard-liners move to tarnish the reputation of Foreign Minister Mohammad Javad Zarif — this time by attributing to him false remarks about the “mistake” of trusting the United States. 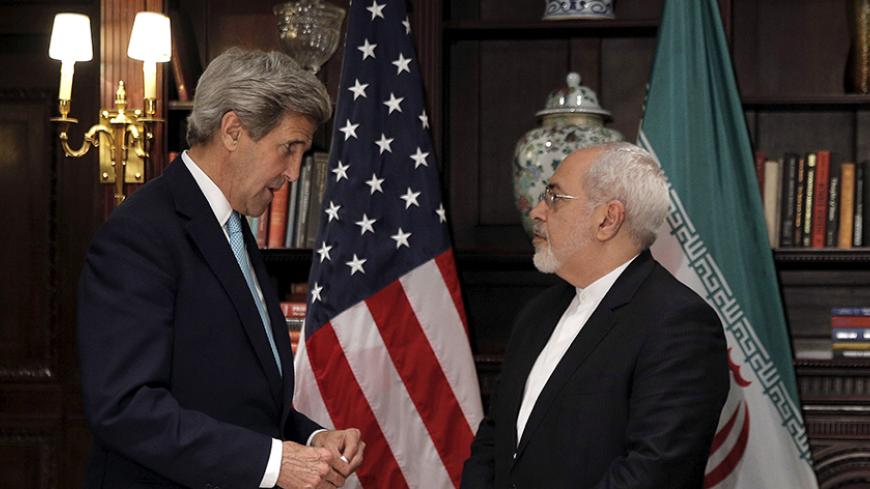 On Dec. 19, Iran’s Foreign Minister Mohammad Javad Zarif attended a meeting at parliament with the foreign policy and national security commission. As in other regular sessions, he informed members of the commission on various foreign policy issues, including the July 2015 Joint Comprehensive Plan of Action (JCPOA).

Karimi Ghoddousi claimed that the main thrust of Zarif’s address to the commission was related to his “mistake” in trusting the Americans. He quoted the foreign minister as having said, “I admit that I made a mistake by listening to [US Secretary of State John] Kerry, and if I had followed my own strategy, I wouldn’t face a problem right now. … Following the violation of the JCPOA, Kerry called me and asked me to go to Italy and hold talks there, and I told him in response that what you did to me has made it impossible for me to even be present in the same city as you. … The [extension of the] ISA [Iran Sanctions Act] is a violation of the JCPOA. … Kerry and [US Energy Secretary Ernest] Moniz had told us that we have methods to prevent the passage of ISA, and we trusted their methods, and this was among Obama’s commitments that weren’t upheld, and I noted this big mistake during my conversation with Kerry.”

On the same day, Alireza Rahimi, a member of the foreign policy and national security commission, described the meeting with Zarif as confidential, saying, “What was quoted from Zarif was a clear lie. These issues weren’t discussed [by Zarif] in the recent meeting of the commission.”

Rahimi further questioned the accuracy and validity of Karimi Ghoddousi’s claims by revealing that the hard-liner wasn’t even present at the session with Zarif.

In this vein, Foreign Ministry spokesman Bahram Ghasemi said of Karimi Ghoddousi on Dec. 21, “Ironically, this person wasn’t present at the meeting, and his quotes from the statements of the foreign minister were completely false, distorted and chosen selectively.”

In response, Karimi Ghoddousi confirmed that while he wasn’t at the meeting, he had the notes of other members of parliament who did attend the session — and an audio file of Zarif’s remarks.

He said, “The audio file of the foreign policy commission’s meeting with Zarif has been reviewed, and [it became clear that] the exact statements [of Zarif] that I published were said. Mr. [Behrouz] Nemati and Mr. [Jahanbakhsh] Mohebi-Nia have also confirmed this.”

However, on Dec. 22, Nemati, a moderate member of parliament, denied Karimi Ghoddousi's statement. “Our assessment is that a wrong perception has caused this problem. The subject of discussion was the ISA sanctions, not the matter of the whole JCPOA,” Nemati said.

Meanwhile, hard-line media outlets jubilantly covered the statements attributed to Zarif. Kayhan daily published the headline, “Zarif: I admit that my trust in John Kerry was wrong,” while Vatan-e-Emrooz went with “Zarif: I made a mistake.”

Mahdi Mohammadi, a hard-line analyst who was part of the negotiating team of former hard-line chief nuclear negotiator Saeed Jalili, tweeted Dec. 22, “Zarif has concluded well. ‘We made a mistake’ is the sum-up of the four-year performance of Rouhani.”

Separately, hard-line retired Gen. Saeed Ghasemi called for the trial of those “who played Iranians with the filthy game of win-win.” He said on Dec. 22, “I was informed yesterday that the foreign minister had told the members of parliament that he had made a mistake by trusting John Kerry. But a secret and whisper-like confession isn’t acceptable. … This confession should be done in public, and this failure should [be revealed] formally before the cameras of the world.”

This is not the first time Karimi Ghoddousi has tried to assail Zarif’s reputation. These efforts have even led to verbal confrontations between him and the foreign minister. Indeed, among Karimi Ghoddousi’s accusations that have proven wrong are his past charges that a member of Zarif’s nuclear negotiation team was a spy and that Rouhani’s brother, special aide Hossein Fereydoun, has imitated the president’s voice in some phone conversations.