The UAE government has been taking steps toward easing tensions with Iran as a safety precaution in the event of a major military conflict between Tehran and Washington. 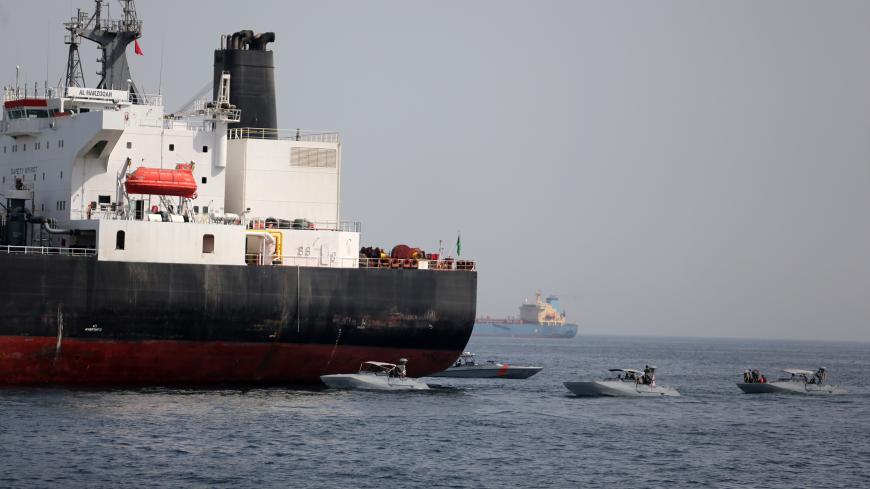 United Arab Emirates navy boats are seen next to Al Marzoqah, a Saudi Arabian tanker that was sabotaged, off the Port of Fujairah, UAE, May 13, 2019. - REUTERS/Satish Kumar

The past four months have witnessed a series of fast-paced developments in the Persian Gulf, with the entire region pushed to the brink of serious conflict. Surprisingly, however, ties between Iran and the UAE are improving as the two seem to be more or less on a de-escalation track.

On May 12, several oil tankers were sabotaged with multiple explosions near the UAE Port of Fujairah. One month later, a Taiwan-bound vessel carrying Emirati oil also came under attack in the Sea of Oman. While US government officials implicated Iran and its proxies, Abu Dhabi resorted to caution and refrained from leveling any accusation against Tehran.

Only a week before the attack, the UAE had declared a policy reversal in war-torn Yemen, where it has been a key member of the Saudi coalition fighting Houthi rebels. The UAE's new Yemen approach was a "peace-first strategy" as opposed to a "military-first strategy." That meant a dramatic drawdown in a war that has long been criticized by the Islamic Republic. Many in Iran would, therefore, interpret the new Emirati strategy as an effort to reduce tensions with Tehran.

A more obvious signal for de-escalation came in the wake of the June 20 downing of a US surveillance drone over the Persian Gulf by Iran's Islamic Revolutionary Guard Corps after it found the aircraft in violation of Iranian airspace. The drone had taken off from a base in the UAE. President Donald Trump ultimately did not retaliate against the attack, saying he canceled plans for a strike on Iran; it perhaps could be said that in the end, he only responded with a series of tweets. All this in turn may have helped bring about a rethinking by UAE officials of their overall foreign policy. They have started assessing the harm that might be inflicted on the UAE in case of a US-Iran military conflict, realizing that they cannot afford to pay the price for policies pursued by a partner, the United States, many see as unreliable.

From the standpoint of Iranian hard-liners, the seeming UAE disappointment with the United States is proof that their long-advocated "strategy of resistance" has been the right one and is paying off. However, not all Iranian political elites are expressing the same level of optimism.

"To construe the UAE behavior as a retreat is but a shallow and naive understanding [of the situation]," Arab world affairs journalist Siavash Fallahpour said in an interview with Al-Monitor. "The UAE is now at a stage where it is picking the fruit from policies, on which it has been capitalizing significantly in recent years."

However, fresh developments in Tehran-Abu Dhabi relations have further backed up the theory that the UAE is seeking true de-escalation. In late July, the head of the Iranian Exchange Bureaus Trade Union spoke of "readiness" expressed by two UAE banks for financial transactions with Iran. In yet another remarkable step, the commander of the Emirati coast guard signed a memorandum of understanding with the Iranian border guard chief following two days of discussions in Tehran. The document aims to boost border security and improve bilateral cooperation. Pictures of the meetings grabbed Iranian headlines and sparked fresh debates among observers about the UAE's shift, while Iranian officials chose to treat the matter with a degree of caution.

"Preliminary signs indicating a change in the UAE behavior have been detected," a senior Iranian diplomat told Al-Monitor on condition of anonymity. "From our viewpoint, nevertheless, those are mostly tactical measures the UAE is adopting in an effort to avert harm from [its involvement in] the Yemen conflict and particularly from drone warfare as well as the larger context of a possible US-Iran war," the diplomat added.

Earlier this month, Abdul-Ghader Faghihi, the president of the Iranian Business Council in Dubai, said in an interview that despite the pressure coming from US sanctions, the UAE has decided to facilitate business visa processing as well as bank account applications submitted by Iranian nationals to Emirati banks. Faghihi said expired Iranian visas also could be extended at the discretion of UAE authorities.

During his Aug. 10 visit to Riyadh, the UAE crown prince declared that his country and Saudi Arabia have agreed to fight alongside one another on a common front line and would "adamantly confront any and all powers that threaten the safety and security of the region." Still, the other recent developments have raised speculation that Saudi Arabia and the UAE could be at odds over Iran.

"The difference of opinion [over Iran] that the Saudis hold with the Emiratis is real," Fallahpour said. "In its tensions with Iran, Saudi Arabia seeks a geopolitical confrontation and even beyond, whereas Abu Dhabi has been trying over years to send the message that it does not share Riyadh's approach toward Tehran. That signal seems to have been received and accepted by the leadership circle in the Islamic Republic."

No matter the words used to describe the Emirati approach, Iranian public opinion is conscious of the UAE's shift, be it a retreat or a tactical short-term measure.

"The UAE's intent for de-escalation with Iran can be viewed within the framework of a regional emergency," said Kamran Karami, a Tehran-based expert on Arab politics. "Fears that the crisis may spill over into the UAE due to the vulnerability of the country's strategic depth, differences between some emirates such as Dubai with Abu Dhabi over the latter's adventurist approach — which has jeopardized the UAE's economic prosperity and stability — skepticism over the workability of the US 'maximum pressure' policy against Iran and ultimately concerns about the range of Iranian missile attacks hitting well inside Emirati territory could all be seen as the major explanations behind the reversal by the UAE government and bin Zayed in particular."

The UAE's next steps could further reveal whether it is exercising a real modification of its foreign policy and security approaches toward Tehran or if the shift is merely a temporary tactic of vigilance meant to keep the flames of imminent military conflicts away from its own borders. In either case, Tehran is closely and cautiously monitoring the slightest moves by its Persian Gulf neighbor.