The United Arab Emirates is showing openness to Iran during the coronavirus crisis, which could point to the UAE’s aim to break loose of the policies of its tradition Saudi ally. 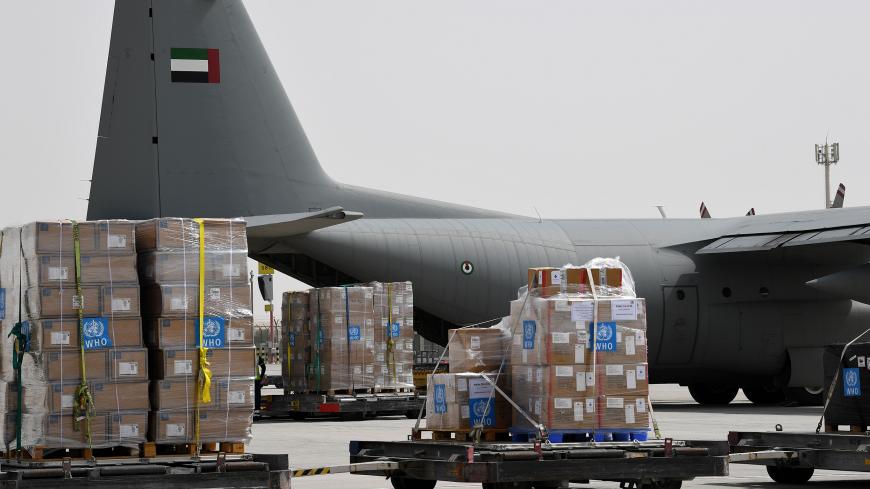 Tonnes of medical equipment and coronavirus testing kits provided by the World Health Organisation are pictured at Al-Maktum International airport as it is prepared to be delivered to Iran with a United Arab Emirates military transport plane, Dubai, United Arab Emirates, March 2, 2020. - KARIM SAHIB/AFP via Getty Images

Iran’s declaration on April 6 that its coronavirus coordination with the United Arab Emirates (UAE) has further improved both countries’ ties indicates an increasing rift between Abu Dhabi’s traditional alliance with Saudi Arabia, and shows how the UAE seeks to use the regional coronavirus outbreak to increase its own influence. Such contrasting strategies could further alter the Middle East’s future geopolitical power balance.

Throughout March, the UAE shipped multiple batches of medical equipment to Iran, which suffers the region’s worst coronavirus outbreak with over 3,600 reported deaths, along with a worsening humanitarian situation amid ongoing US sanctions. Iranian Foreign Minister Mohammad Javid Zarif and UAE Minister of Foreign Affairs Abdullah bin Zayed bin Sultan Al Nahyan talked on the phone on March 15 to discuss ways to contain the pandemic.

Such aid and communication efforts were apparently unprecedented, amid the impression that the UAE and Iran are long-standing regional adversaries, in line with the traditional Gulf Cooperation Council stance of opposing Iran’s regional expansion. As a younger foreign policy actor, the UAE was seen as mostly in step with Saudi Arabia’s positions. The Saudi-UAE partnership is at the core of GCC security, especially given the rift with Yemen.

However, the UAE is showing an independent course from that of Saudi Arabia and the United States, while continuing to stress its close security relationships with both.

The World Health Organisation (WHO) expressing its “sincere gratitude” to the UAE for providing a chartered plane allowing the WHO team and medical supplies to travel to Iran will further bolster Abu Dhabi’s global humanitarian image.

These developments ultimately distinguish the UAE from its ally and fellow geopolitical heavyweight Saudi Arabia, whose relations with Iran have further soured amid the current crisis.

On March 18, it also “formally opposed” and blocked a statement from the Non-Aligned Movement designed to condemn US sanctions on Iran, which prevented crucial aid supplies reaching the Islamic republic to alleviate the crisis.

Spokesman for Iran's Ministry of Foreign Affairs Seyyed Abbas Mousavi condemned the Riyadh-led measure as a “great pity" that acted "against the people of Iran under such perilous circumstances," showing Tehran's further deteriorating view of Saudi Arabia.

Clearly, Riyadh’s prioritization of countering Iran’s regional expansion and its nuclear program, further driven by Riyadh’s ongoing stoking of sectarian tensions, has increased during this fallout.

Such differences between the Emirati and Saudi approaches to Iran are not unprecedented. Over the past year, Abu Dhabi reduced its condemnation of Iran and took a diverging strategy to Riyadh over the Saudi-led Yemen war, waged in the name of defeating the Iran-backed Houthis.

Last October, the UAE released $700 million of frozen funds to Iran, amid their improving relations. Iranian parliamentarian Akbar Torki said, “Emiratis have … understood that Western countries and Saudi Arabia cannot provide the country with security in current circumstances,” citing an increase in economic relations between Tehran and Abu Dhabi.

Meanwhile, the UAE reportedly pursued secret talks with the Iran-backed Houthis in northern Yemen, and later in November Emirati Minister of State for Foreign Affairs Anwar Gargash proclaimed that the Houthis “are a part of Yemeni society and they will have a role in its future.”

As the UAE seeks an independent southern state of Yemen, to facilitate its influence over the Red Sea and boost its global maritime trade, defeating the Houthis is not Abu Dhabi’s priority. Rather, negotiating with the Houthis and its Iranian backers would bolster its ambitions.

Riyadh’s resuming of its air campaign on Houthi areas in March, which it claimed hit Iranian military targets, indicates its perceived fear of Iran’s presence in Yemen still drives its continued operations, even though Riyadh’s war has failed to achieve its objectives and has seen the Houthis and Iran drift closer together in the last year.

While Saudi Arabia seeks de-escalation with Iran, it still opposes Iran’s regional influence, which undermines mediation efforts, even though Tehran was more receptive toward restoring ties with Riyadh, as a top Iranian diplomat said in February.

Furthermore, the UAE attempts to secure influence in Syria by improving ties with President Bashar al-Assad, where compromising with Iran is essential due to Tehran’s support for Assad and its strong militia presence in the country. Abu Dhabi perceives Assad’s presence as a bulwark against its current major regional adversary Turkey, along with Islamist forces that it deems hostile — both of whom Assad also seeks to counter.

Abu Dhabi Crown Prince Mohammad bin Zayed’s March 27 phone call with Assad, where the former voiced his support for the Syrian people, indicates how the UAE is also using the crisis to bolster its fledgling ties with Syria.

Saudi Arabia previously backed anti-government rebels in Syria’s war; yet Emirati initiatives to reach out to Assad since reopening its Damascus embassy in December 2018 have likewise driven a similar response from Riyadh. Yet Abu Dhabi is arguably taking a more proactive role in bolstering its own relations with Syria.

Amid flaring tensions with Iran, last September’s attack on Saudi Arabia’s Aramco facilities, which was blamed on Iran, not only exposed Riyadh’s vulnerability but also Abu Dhabi’s. Concerns over regional stability increased after the killing of Iranian Maj. Gen. Qasem Soleimani in January, where Tehran vowed revenge. The UAE therefore sees improving ties with Tehran as an essential measure for improving its own security — something Riyadh has not yet fully pursued.

As the coronavirus crisis worsens, affected states will increasingly turn to one another for support, and the UAE has already demonstrated it is willing to take this role, while using diplomacy and aid for its own interests.