Gulf states are turning their backs on supporting armed groups in Syria and preparing to re-engage the government in Damascus. 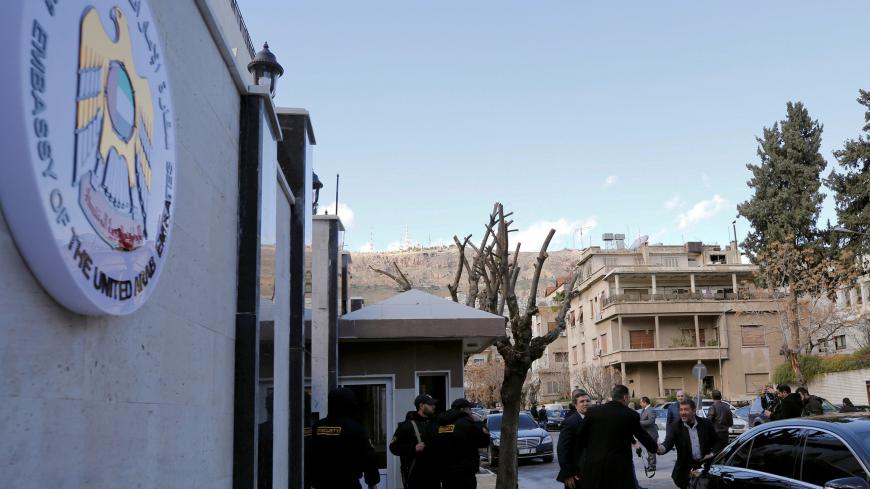 Security guards stand in front of the United Arab Emirates Embassy during its reopening in Damascus, Syria, Dec. 27, 2018. - REUTERS/Omar Sanadiki

Although not over, the Syrian crisis is beginning a new chapter. Regional governments are slowly accepting the inevitable and beginning to re-engage with Damascus. Given realities on the ground, Arab regimes have concluded that because Syria’s Baathist order is not on the verge of falling, it is most pragmatic to restore relations with President Bashar al-Assad’s government.

A watershed in Syria’s reintegration into the diplomatic fold of the Arab League came late last year when the embattled Sudanese President Omar al-Bashir paid a visit to Damascus. Bashir became the first Arab head of state to meet with Assad since the Syrian crisis started nearly eight years ago. That meeting followed developments in Jordanian-Syrian relations signaling Amman’s interest in a rapprochement with Damascus, and it came shortly before the United Arab Emirates and Bahrain announced the reopening of their diplomatic missions in the Syrian capital.

The Gulf Cooperation Council (GCC) members, which mostly opposed Assad’s regime early in the Syrian civil war and supported (albeit to various extents and in different ways) the Sunni-dominant anti-Assad rebellion, have now begun to see their challenge as bringing Syria back to Sunni Arab states’ orbits of influence and further away from non-Arab Iran and Turkey. For Saudi Arabia and the UAE, the main problem with Syria’s regime is not the regime per se, but rather its closeness to the Islamic Republic, Riyadh’s archenemy. Thus, working with Assad would not in itself be a negative issue for Saudi Arabia or Abu Dhabi so long as Damascus pivots away from Tehran, even if that appears unrealistic given how much Assad’s regime owes the Iranians.

Odds are good, however, that the GCC states that are reopening their diplomatic missions in the Syrian capital will be keen to work with Russia on numerous security and economic files in the war-torn country, which badly needs rebuilding assistance. Given that Moscow and Tehran, while closely aligned on Syria, do have competing and conflicting interests in the Levant, as both seek to be the Damascus regime’s top ally in the post-conflict period, the Saudis, Emiratis and Bahrainis would much prefer Russia coming out on top of Iran in this regard.

From these GCC states’ perspectives, despite having certain disagreements with key aspects of Moscow’s foreign policy in the Arab world, they have come to view Russia as somewhat of a stabilizing force, unlike Iran, which is seen as a destabilizing player. In 2019, Saudi Arabia and some of its Sunni Arab allies will likely seek to use their leverage, particularly in the form of financial support for Syria’s reconstruction, in an effort to pressure Russia into pushing Iran’s hand out of Syria, even if Moscow’s means to eject Iranian influence from the country are highly limited at best.

The UAE’s role in GCC-Syria reconciliation

It appears logical that apart from Oman, which never cut its ties with Assad’s government, the UAE is the GCC member most supportive of the greater Arab world re-accepting Damascus into its diplomatic ranks and re-engaging the regime. In contrast to Saudi Arabia, the UAE was never a major supporter of the anti-Assad rebellion due to its strong and overriding Islamist identity that led Abu Dhabi to fear that the secular Syrian leader’s ouster could pave the way for a Muslim Brotherhood government to ascend to power in Damascus, much like in Cairo in 2012.

Long before the Arab states that initially severed ties with Damascus began considering a re-acceptance of Assad’s regime, the Emirati leadership indicated its keenness to work with both Russia and the US-led coalition in the struggle against the Islamic State and other extremists in Syria. Abu Dhabi also expressed its openness to accepting Assad’s rule in Syria, which again contrasted greatly with Riyadh’s “Assad must go” line. Some reports in the Turkish press alleged that the UAE began working with Damascus and Moscow to target certain Islamist elements of the Syrian rebellion, highlighting how low of a priority regime change in Damascus was for the Emirati leadership, if it ever was a priority at all.

For all of Damascus and Abu Dhabi’s differences, a common hatred for the Muslim Brotherhood puts the Syrian and Emirati regimes in the same boat. Moreover, the UAE has been opposed to the Arab Spring uprisings, fearing the long-term damage to the "authoritarian stability" model that had potential to come from popular, grass-roots and bottom-up movements aimed at shaking autocratic regimes.

The closeness between the crown princes of Abu Dhabi and Saudi Arabia, Mohammed bin Zayed and Mohammed bin Salman, will be key to observe when it comes to GCC-Syria relations. Analysts expect bin Zayed to use his influence over bin Salman to facilitate a Saudi-Syrian rapprochement with Abu Dhabi, serving as a diplomatic bridge between Riyadh and Damascus. Unquestionably, King Salman and President Assad shaking hands at this year’s Arab League meeting would be extremely significant, at least symbolically, for Damascus’ reintegration into the greater Arab world’s diplomatic arena.

The GCC state that might prove to be the biggest outlier with respect to political and diplomatic re-engagement of Syria is Qatar. Bahrain, Egypt, Saudi Arabia and the UAE have blockaded Qatar since mid-2017 on charges that Doha supports terrorism — a narrative also pushed by Assad’s regime since early on in the Syrian crisis. Qatar, which aligns closely with Ankara vis-a-vis Syria, has championed democratic Islamists against secular dictatorships in the region since Sheikh Hamad bin Khalifa Al Thani’s ascendancy in 1995. Thus, the nature of Assad’s rule, rather than his regime’s relationship with Iran, is more of a problem from Doha’s perspective.

Despite Qatar’s past role as a major foreign state sponsor of the Syrian rebellion, officials in Doha, like all Arab capitals, recognize that Assad’s regime has “won” the civil war. Thus, the pragmatic reasons for any GCC state to engage Damascus also apply to Qatar. As the Qataris move toward engaging Syria diplomatically and politically, Doha’s view of both Turkish and Iranian activity in post-conflict Syria will differ from Riyadh and Abu Dhabi’s with the Qatari leadership far more accepting of Ankara and Tehran’s determination to heavily influence the war-torn country’s trajectory. Whereas the UAE has supported the dominant Syrian Kurdish militia — the People’s Protection Units (YPG) — in northern Syria to push back against Turkey’s actions in the war-torn country, Qatar has expressed its full support for Ankara’s anti-YPG/anti-Kurdistan Workers Party (PKK) operations in both Syria and Iraq. Similarly, in a sign that Qatar has truly escaped the Saudi shadow, earlier this month Doha’s ambassador to Moscow spoke about Iran’s “legitimate interests” in Syria.

Grappling with the future

Despite probably preferring not to deal with Assad’s regime, the GCC states accept that doing so is the only way for the oil-rich Gulf monarchies to exercise influence in post-conflict Syria. Although many GCC citizens, particularly Sunni Islamists, may wish that their governments would continue treating Syria like a pariah state, officials in the Gulf have realized that such a strategy would further undermine the ability of Sunni Arab states to decrease Tehran’s control in Syria and influence throughout the Levant. The UAE and most of its fellow GCC states have recognized the need to reopen ties with Syria and abandon hope for a military solution to the Syrian crisis that entails Assad’s fall.