The US military is signaling its show of force against Tehran may continue as the State Department explores paths toward a renewed nuclear agreement. 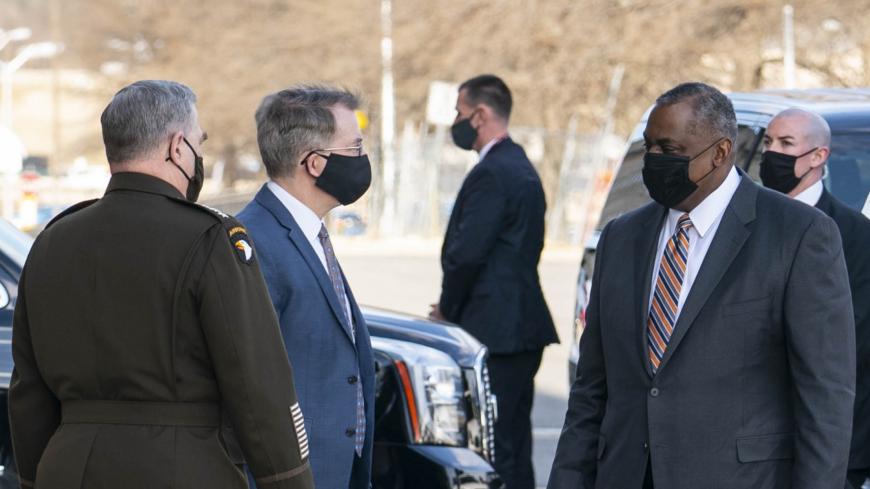 As the Biden administration weighs next steps with Iran, the Pentagon is reassuring regional partners that deterrence remains central to US strategy toward Iran.

“Iran continues to be a malign actor in the region, continues to support terrorism throughout the Middle East, and they still pose threats to our partners and friends there,” Pentagon spokesman John Kirby told reporters in his first press briefing under the new US administration Thursday.

“They still have an active ballistic missile program and they have been recently re-spinning centrifuges,” Kirby said, adding, “We still have national security interests in the Middle East and in the Persian Gulf specifically.”

The US military will continue its efforts to shield Washington’s partner states from the “acts of terrorism that Iran continues to propagate throughout the region,” Kirby said.

“To the degree that we have capabilities to try to deter that activity, I think you can expect we are going to use it,” he said.

The Pentagon’s message appears aimed at reassuring officials in the United Arab Emirates, Saudi Arabia, Israel and elsewhere in the region, where the Biden administration’s planned shift toward a more diplomatic approach to Iran has heightened concerns over security.

Kirby’s statement comes one day after the State Department acknowledged it had temporarily frozen major Trump administration arms deals, among them precision munition sales to Saudi Arabia and a $23 billion sale of 50 F-35 fighter jets and 18 armed MQ-9B drones to the UAE.

The Trump administration skirted Congress to push weapons sales to Saudi Arabia and the UAE, even as United Nations warned that Washington may be complicit in war crimes for the Gulf coalition’s indiscriminate killing of civilians in Yemen’s civil war.

As a presidential candidate, Biden promised to pursue a different track, threatening to sever US support for the Saudi-led coalition’s intervention in Yemen’s war. Officials with the new administration, however, have said that they may to continue to pursue a Trump-era initiative to convince Arab leaders to normalize ties with Israel, despite there being no resolution in sight to Israel's more than seven-decade conflict with the Palestinians.

American officials are hoping the Abraham Accords will allow the United States to shore up regional defense cooperation to stabilize the Middle East and dissuade Iran from expanding its influence via proxy militias and ballistic missiles. That way, the United States can continue to shift its focus to countering China, which has emerged as a top strategic priority for Washington in the coming decades.

The commander of US forces in the Middle East, Gen. Kenneth “Frank” McKenzie, landed in Israel on Thursday to discuss Iran and US regional policy with senior defense officials. His arrival, which marks the Biden administration’s first official visit to Israel, follows a stop in Saudi Arabia earlier this week and coincides with a flurry of high-level calls between senior US and Israeli officials.

Some members of Prime Minister Benjamin Netanyahu’s camp are again raising the specter of a highly risky unilateral strike against Iran if the Biden Administration returns to the original 2015 nuclear deal — a proposal widely seen in Washington as a pressure tactic.

Most notable was just such a statement on Tuesday by Israeli Defense Forces Chief of Staff Lt. Gen. Avi Kochavi, who previously voiced approval for the Iran deal as chief of military intelligence in 2015.

Gen. McKenzie met with Kochavi and Defense Minister Benny Gantz on Thursday, their first meeting since CENTCOM was ordered to incorporate Israel into its geographic region of responsibility by the Trump White House earlier this month.

“This shift will afford Israel opportunity to deepen cooperation with new regional partners and broaden operative horizons,” Gantz said to McKenzie, according to a statement from Gantz' office provided to Al-Monitor.

The CENTCOM commander also reportedly met with Mossad chief Yossi Cohen, who is expected in Washington in the coming weeks to share intelligence with the Biden administration officials regarding the Islamic Republic's latest activities.

Earlier this week, US Central Command launched one more round-trip sortie of B-52 nuclear-capable bombers to the region, continuing its unsubtle signal to Tehran. The flight is the sixth such deployment since November.

Fighter aircraft from the Jordanian and Saudi Royal Air Forces flew alongside the Stratofortresses for part of the flight, building on a handful of recent joint US training drills with militaries in the region in recent weeks.

Qatar’s Rafale fighter jets — purchased earlier this year from France — practiced linking up with and defending an American KC-135 Stratotanker for the two countries’ first ever joint midair refueling exercise.

On Wednesday, US Secretary of State Antony Blinken cautioned that a renewed agreement with Iran would take some time. “We’re not there yet, to say the least,” he said.

Blinken and his Iranian counterpart, Foreign Minister Mohammad Javad Zarif, have both stated in the last 36 hours that the other side must return to compliance with the deal first before any agreement is possible, setting up what appeared to be an early impasse as both governments continued to posture diplomatically and militarily.