Why GCC has been silent on Trump's 'Muslim ban'

Gulf states have failed to criticize the Trump administration for its recent "Muslim ban" in an attempt to keep the new US administration on their side in light of the economic and security challenge the Gulf region faces. 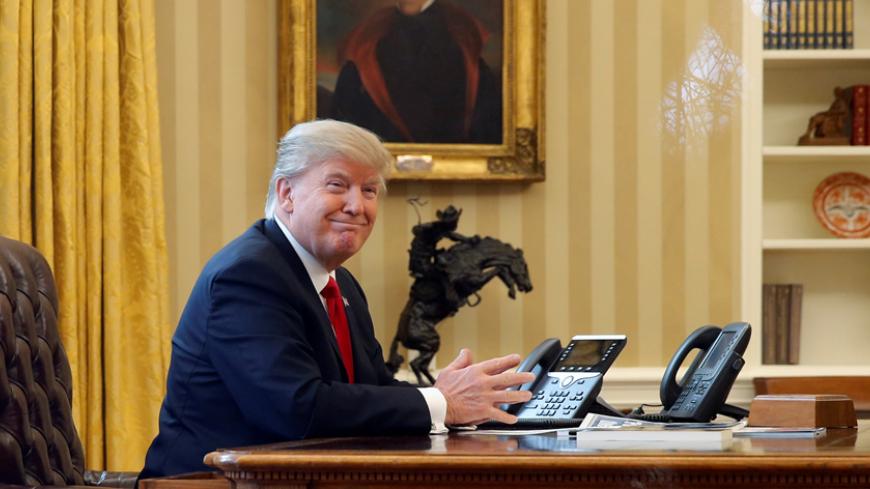 US President Donald Trump’s “Muslim ban” executive order targeting seven Muslim-majority African/Middle Eastern countries received a chorus of criticism from around the world and within the Beltway. A number of Washington’s traditional allies, in addition to Iran, the United Nations and the Arab League, condemned the new American president’s decision, as did scores of US lawmakers on both sides of the partisan divide.

Save Qatar, which expressed a subtle disapproval of Trump’s executive order, the Gulf Cooperation Council (GCC) members, however, have been absent from this wave of condemnation. The 45th president’s phone conversation Jan. 29 with Saudi King Salman bin Abdul-Aziz Al Saud did not cover the “Muslim ban.” The United Arab Emirates’ (UAE) foreign minister and a Dubai police official went as far as to defend the move as within the US right as a sovereign nation, while dismissing the interpretation that the executive order is Islamophobic. Bahrain, Kuwait and Oman have, thus far, been silent. The lack of condemnation from the GCC is indicative of the Arab Gulf states’ "wait-and-see" approach to the new US administration and their vested interests in staying on Trump’s good side at a time when their economic and security challenges require close cooperation with Washington.

The GCC royals have numerous agendas that they see as best protected by pursuing better ties with Trump than they enjoyed with Barack Obama. Public criticism over the American president’s executive order could set back such interests that include securing greater US support in countering Iran’s regional conduct, safeguarding their sheikhdoms from the Islamic State (IS) and attracting foreign investment for their economic diversification programs.

A major disappointment that the Saudi leaders and other Arab state officials encountered with the Obama administration was its perceived weakness on Iran. From the GCC’s perspective, the last administration failed to take adequate action to counter Tehran’s conduct across the region, most notably in Syria and Yemen, which most in the council see as a grave security threat to the Arabian Peninsula monarchies. There have been clear signs that the Trump administration is determined to take a harder stance against Iran’s posture in the Middle East.

On Feb. 1, as the United States and three of its Western allies were conducting three-day war games in the Gulf to “ensure the free flow of commerce” through the Strait of Hormuz, national security adviser Michael Flynn warned that Washington is “officially putting Iran on notice” while engaging in a “deliberative process” to “consider a whole range of options” vis-a-vis Tehran. Flynn’s words were a response to Iran’s testing of a ballistic missile and an attack waged by Iranian-backed Houthi rebels against a Saudi naval vessel. Two days later, Flynn’s words translated into action once the Treasury Department imposed sanctions on 25 individuals and companies affiliated with Tehran’s ballistic missile program, and others supporting the Islamic Revolutionary Guard Corps’ Quds Force. Unquestionably, such actions provide Riyadh with a rather optimistic outlook on the new administration’s approach to addressing the Islamic Republic and the alleged threat it poses to the GCC.

The Obama administration’s refusal to create a "no-fly zone" in Syria for fear of drawing the United States into a bloody Middle Eastern war frustrated the Saudis and Qataris, who unsuccessfully sought to pressure Obama into stepping up the US military’s involvement in Syria against the regime. Despite Trump’s calls for severing Washington’s support for Saudi/Qatari-backed Sunni rebels in Syria, the US president’s advocating for "safe zones" in Syria and Yemen received a full endorsement from the Saudi king during his phone call with the American president.

A source of unease in the kingdom and other Arab Gulf states is that Trump will not lead a "typical Republican administration." Rooted in a history of deeper cooperation with former Presidents Ronald Reagan, George H.W. Bush and George W. Bush, the GCC has long been more comfortable with Republican White Houses that catered to oil interests and conducted more militaristic foreign policies against common adversaries of the United States and the GCC. Trump’s rhetoric, however, about making the GCC pay more for its defense while calling for a US-Russia partnership in the Middle East unsettled Arab Gulf leaders who feared that the real estate mogul would view the oil-rich monarchies as merely "cash cows" rather than vital allies and fail to take their concerns about regional tensions seriously. Although it is too early to determine how the GCC will eventually fit into Trump’s grander Middle East foreign policy, these early moves signal that the 45th president is likely determined to work closely with the Arab Gulf states on the Iran file.

Although many were baffled as to why the “Custodian of the Two Holy Mosques” (the official title of every Saudi king since 1986) did not raise the executive order during his recent phone call with Trump, strategic interests rather than religion and socially constructed identities form the basis of state-to-state relationships. Many in the GCC found Trump’s Islamophobia repulsive and disturbing, as underscored by many Saudi elites’ highly negative reaction to the property billionaire’s December 2015 call for a “Muslim ban,” yet officials in Riyadh are careful about which battles they wish to pick with the 45th president. The election of Trump, regardless of the many objections that some in the GCC may have previously articulated about his candidacy, will not change the fact that Saudi Arabia and other Arab Gulf states remain dependent on the United States for their security. Rather than condemning his executive order, Saudi Arabia and the UAE are instead focused on advancing mutual interests with the new White House while avoiding any public spat between the GCC and Washington.

A number of outstanding issues, chiefly the Justice Against Sponsors of Terrorism Act (JASTA), which Trump endorsed and permits US citizens to sue the Saudi government for its alleged role in the attacks on Sept. 9, 2001, are sensitive matters that the United States and the GCC must eventually address. The Arab Gulf states will be in a better position to do so if they warm their ties with the new administration. As the Saudis seek to move forward with Vision 2030, an ambitious transformation plan aimed at ending the kingdom’s economic dependence on oil, investment from the United States and other wealthy countries is crucial. By supporting the “Muslim ban,” either through an outright endorsement or calculated silence, the Saudis and other Arab Gulf states are investing in a better relationship with Washington as the JASTA question remains a major problem for US-GCC relations that Trump will eventually need to address.

Not lost in the equation is the defense industry’s vested interests in a continuation of Washington’s alliances with the six GCC members. Although many in the media quickly pointed to the absence in the “Muslim ban” of countries where Trump has business interests, particularly Saudi Arabia and the UAE — the countries of origin for all but two of the 9/11 hijackers and thousands of IS members — another factor is that the United States is not a major arms seller to most of the seven countries listed: Iran, Iraq, Libya, Somalia, Sudan, Syria and Yemen. With James Mattis heading the Pentagon and Rex Tillerson serving as America’s top diplomat, these two figures have close ties to the GCC and view the Arab Gulf states as pivotal American allies in the Middle East, particularly as the White House flexes its muscles in the Gulf to send Iran a bold message.

Nonetheless, the Saudis are not entirely at ease with Trump and his “Muslim ban.” White House Chief of Staff Reince Priebus’ statement that “perhaps other countries need to be added” to the list is unsettling for the Arab Gulf states, which many of Trump’s critics have argued deserved to be placed on any such list before countries whose citizens have never waged a single deadly act of jihadi terrorism on US soil. If the administration adds any members of the GCC, it is doubtful that most Arab Gulf officials will remain silent.