After Qatar joined Saudi Arabia and the United States in imposing new sanctions on individuals suspected of financing terror groups in Yemen, it will be harder for the GCC states involved in the blockade of Qatar to make their case to Washington. 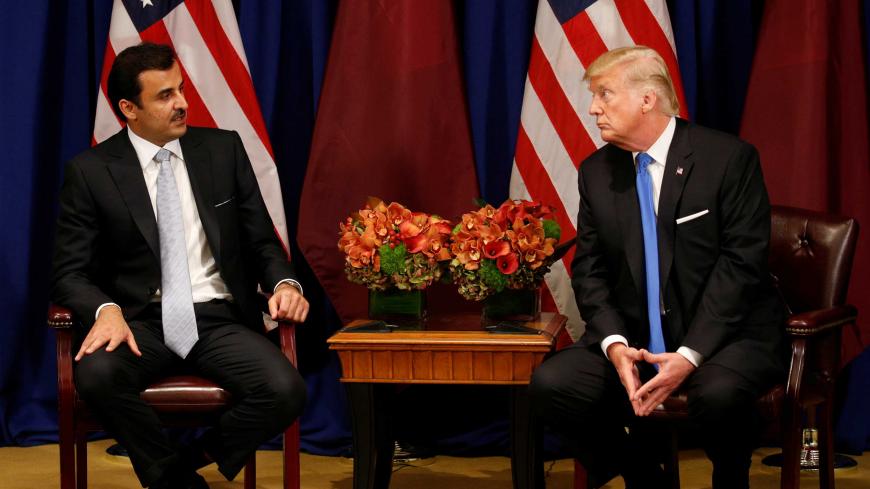 On Oct. 25, the United States Department of Treasury and all Gulf Cooperation Council (GCC) states imposed sanctions on eight individuals and one business suspected of financing, facilitating and arming al-Qaeda in the Arabian Peninsula (AQAP) and Islamic State (IS) in Yemen. These sanctions are the first ones imposed by the joint US-Saudi Arabia-chaired Terrorist Financing Targeting Center (TFTC) — announced during Donald Trump’s visit to Riyadh for the Arab Islamic American summit in May — of which the five smaller GCC states are also parties.

The TFTC’s purpose is to enhance Washington and the Persian Gulf monarchies’ coordination in the disruption of terrorist financing, which the Trump administration has stressed is essential to defeat violent extremists. While speaking at an investment conference in Riyadh, Treasury Secretary Steven Mnuchin applauded the GCC members for agreeing to the “largest ever multilateral designation in the Middle East.”

One of the sanctioned Yemeni individuals — Abdel-Wahab Humayqani — has a notable history. Based on allegations that Humayqani recruited and raised funds for AQAP, and coordinated an attack that killed seven at a Yemeni Republican Guard base in 2012, the US Treasury Department added him to its “Specifically Designated Global Terrorist” list in December 2013. Yet in June 2015, he represented Yemen’s exiled/Saudi-backed government at roundtable talks in Geneva. US officials voiced objections to Humayqani’s presence in Geneva, yet did not create a fuss given Washington’s vested interest in promoting the roundtable talks. Such a response was illustrative of the Obama administration’s difficult struggle to support a Saudi-led coalition — whose fight against Iranian-backed Houthi rebels led to a tacit partnership between Sunni nonstate actors, including AQAP and the Muslim Brotherhood, and the Arab coalition — while simultaneously waging military operations against al-Qaeda’s local franchise.

Although the Trump administration has not only continued backing the Saudi-led war against the Houthi rebel movements but has also increased Washington’s support for the campaign, the White House is also stepping up airstrikes on AQAP, which has exploited the civil war to gain greater influence since 2015. In fact, on Oct. 16 the US military struck IS targets in Yemen for the first time, building on months of stepped-up operations against AQAP.

The TFTC sanctions have implications for the Gulf dispute’s war of narratives. The Saudi/United Arab Emirates-led bloc has accused Qatar of sponsoring scores of terrorist groups, including IS and al-Qaeda, whose Yemeni offshoots were the targets of these new sanctions. Yet Doha's joining Washington and the other five GCC governments in sanctioning Humayqani and others raises important questions about such accusations and strengthens Qatar’s narrative that the blockade is unjustified and imposed due to ulterior motives.

Building on Washington and Doha’s anti-terror memorandum of understanding signed in July, Qatari officials maintain that Doha has been fully compliant with the Trump administration’s requirements for fulfilling the responsibilities laid out by the American president in Riyadh in May. With Qatar joining this US/GCC effort, the Arab states that have sought to convince the US government and public to support their action against Doha will be increasingly challenged to make this case before Washington’s diplomatic and defense establishment.

Ultimately, as Yemen has been beset by multiple conflicts, the GCC was never united behind Riyadh’s military campaign against the Houthi rebels. Oman always opposed the coalition’s war; Kuwait’s participation was largely symbolic, having never deployed its forces in Yemen; and Saudi Arabia suspended Qatar from the coalition after the Gulf dispute erupted in June. Yet efforts to combat IS in Yemen and AQAP receive the full endorsement of all GCC states, each of which has its own unique reasons for supporting the fight against such extremists. Moreover, Saudi Arabia and the UAE have had conflicting agendas in Yemen, with Abu Dhabi objecting to Riyadh’s tactic support for Sunni Islamists based on the kingdom and such “terrorist” groups’ shared opposition to the Houthis and expanding Iranian influence

Qatar agreeing to sanction individuals and a business linked to IS in Yemen and AQAP will improve Doha’s standing in Washington’s eyes on the terrorist financing file, but not Riyadh’s or Abu Dhabi’s. Several of the Saudi Arabia/UAE-led bloc’s grievances with Qatar stem from Doha’s ties with many Sunni Islamist groups, including ones that Western governments — and even some GCC states — do not recognize as terrorist factions such as the Muslim Brotherhood. Yet unless the Qataris join other GCC states in targeting Hamas and other groups and deport controversial Islamist figures such as Yusuf al-Qaradawi from the emirate, it is doubtful that the Saudi Arabia/UAE-led bloc will take back their accusations that Doha sponsors terrorism.

Throughout the GCC crisis, US Secretary of State Rex Tillerson and other members of the American diplomatic establishment have expressed their view that Qatar has shown its commitment to collaborate with Washington in the struggle against terrorism and that Doha has been “very reasonable” regarding the Gulf dispute. Earlier this month, Tillerson also stated that the Gulf dispute’s prolongation is attributable to the Saudi Arabia/UAE-led bloc’s refusal to engage Qatar, not any continuation of conduct on Doha’s part as the blockading countries maintain.

Fundamental disagreements in the GCC over which nonstate actors constitute terrorist organizations and unhealthy geopolitical rivalries between Qatar and its Sunni Arab neighbors remain unresolved despite the council’s six members uniting behind the TFTC’s sanctions imposed on sponsors of Yemen’s Salafist-jihadists. In any event, the Arab states blockading Qatar will certainly continue their war of narratives against the emirate. In the process of doing so, however, they can expect to irritate more diplomats in Washington who have called on all involved parties to tone down their rhetoric against Qatar, seen by the American diplomatic and defense establishment as a vital Middle Eastern ally that is supporting the United States’ war against extremists in the Arabian Peninsula’s southwestern corner and beyond.