Defeating IS in Yemen

While the Islamic State has faced major defeats in Iraq and Syria, the protracted war in Yemen has provided the terrorist group's branch in that country oxygen to breathe. 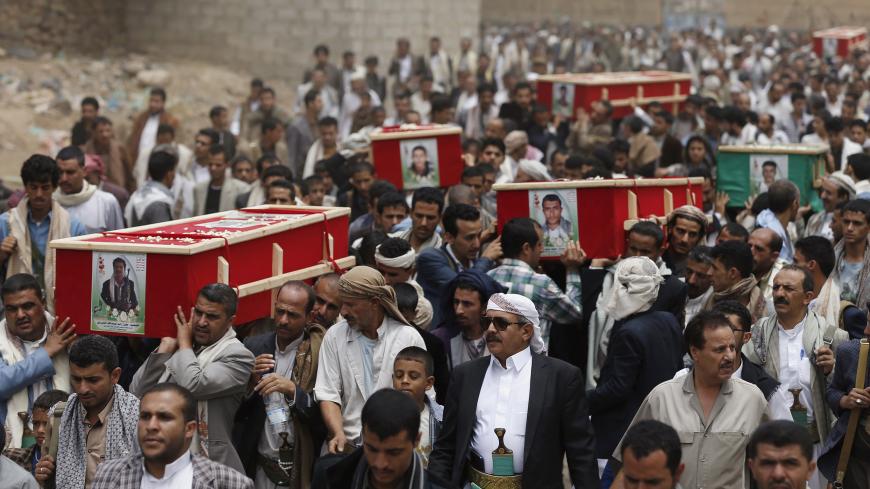 Houthi followers in Sanaa, Yemen, on July 22, 2015, carry coffins of those killed in a car blast attack July 20 in Sanaa and of a Houthi fighter who was killed during fighting in Aden. The Islamic State's Yemen branch claimed responsibility for the attack. - REUTERS/Khaled Abdullah

The enemies of the Islamic State (IS) have achieved major victories over the Islamist militant group this year in Iraq and Syria, capturing its onetime strongholds in both countries, albeit through ruthless military campaigns that entailed high civilian death tolls and the decimation of ancient cities. In Yemen, however, the situation is different. The local IS branch — IS-Yemen — is displaying stronger capabilities and greater influence through continued exploitation of Yemen’s state collapse, civil war and humanitarian disaster.

As the United Arab Emirates (UAE) seeks to assert a more influential hand in southern Yemen, IS-Yemen’s recent violence is increasingly directed against Abu Dhabi. The UAE finances and manages the Security Belt Forces that mainly operate in Aden, Lahjh, Abyan and Yemen’s other southern governorates. They have fought IS-Yemen, al-Qaeda in the Arabian Peninsula (AQAP) and the local Muslim Brotherhood branch, which Abu Dhabi sees as extremist threats.

Washington shares Abu Dhabi’s concerns that Yemen is becoming more of a safe haven for radical Sunni militants seeking to target both Gulf Cooperation Council (GCC) members as well as Western countries and interests across the Arab world. As IS fighters flee Iraq and Syria, there are legitimate anxieties about more foreign fighters joining IS-Yemen’s ranks as the local branch continues to spill blood.

Washington and Abu Dhabi’s vested interests in preventing extremist forces from usurping power in Yemen have much to do with global trade. To safeguard trade corridors that transit waterways such as Bab el-Mandeb and the Gulf of Aden from extremists, the United States and the UAE are cooperating in counterterrorism initiatives that target both IS-Yemen and AQAP. Without specifying any details, US Central Command has confirmed that "a small number of US forces are present in Yemen to exchange information with capable partners in the region."

Although analysts say that AQAP, which has more members and deeper roots in Yemen than IS-Yemen, is the dominant Salafi-jihadi terror faction in Yemen, the Trump administration has expanded America’s "war on terror" in the Arabian Peninsula country to target both through a revision of the rules of engagement that allows more kinetic strikes. On Oct. 16, the US military waged its first operations against IS-Yemen, launching a dozen missiles at IS-Yemen positions in al-Bayda province. Also last month, the US Department of the Treasury and all six GCC states imposed sanctions on Yemeni individuals and the Al-Khayr Supermarket suspected of financing, facilitating and arming IS-Yemen and/or AQAP. Despite the growing debate in Washington about US interests in the Saudi-led coalition’s war against Iran-allied Houthi rebels — particularly in light of the worsening humanitarian crisis and civilian death toll in Yemen — there is a general consensus that the struggle against IS-Yemen and AQAP in Yemen must remain a high priority for the United States.

Ultimately, IS-Yemen is unique in facing staunch opposition from virtually all involved parties in Yemen’s multidimensional civil war. The United States, the Saudi-led Arab coalition, Saudi/Emirati-backed Sunni forces in Yemen and the southern separatists are enemies of IS-Yemen. Iran views IS-Yemen as a threat. Tehran’s Houthi allies have fought the local IS offshoot, and Houthi fighters have been the victims of IS-Yemen’s barbaric killing (featured in its propaganda videos). IS-Yemen has targeted President Ali Abdullah Saleh, too. Despite a mixed record of coordination, AQAP and IS-Yemen forces have clashed as well, with AQAP’s propaganda portraying AQAP as more “moderate” than IS-Yemen.

Oman — the only GCC member that sat out the Riyadh-led Arab coalition in Yemen — views the specter of extremists such as IS-Yemen and AQAP transiting into the sultanate’s southernmost Dhofar governorate as the top threat to Omani security. Although Russia has played a limited role in Yemen, one of the factors driving Moscow’s growing interest in the country pertains to counterterrorism. China, too, has a vested interest in the stabilization of Yemen, given the country’s position in Beijing’s ambitious One Road, One Belt initiative, linking the Gulf of Aden to the Red Sea and by extension Europe, the Maghreb and the Levant.

Unfortunately, although essentially all global, regional and local actors in Yemen share an interest in defeating IS-Yemen, a continuation of the Yemeni civil war will undermine these parties’ capacity to weaken the Yemeni wing of IS. As the Trump administration sets its sights on IS-Yemen while waging increasingly aggressive operations against AQAP, officials in Washington must recognize the extent to which the prolonging of the Saudi-led war against Houthi rebels is providing IS-Yemen with oxygen to breathe. These extremists have a high interest for Yemen’s civil war to rage on and for the humanitarian crisis to worsen because the biggest threat to the groups' strength would be a centralized Yemeni government building up enough legitimacy and military might to take on IS-Yemen and AQAP.

Although achieving such stability is a challenging proposition, the Trump administration should use its leverage over Riyadh to convince Saudi Arabia that roundtable talks with the Houthis are absolutely necessary for reaching a long-term peace agreement. Failure to resolve the civil war will not only put millions of Yemenis at an unprecedentedly high risk of famine in the coming weeks and months, but continued conflict in Yemen also will offer IS-Yemen new opportunities and grievances to exploit as the internationally recognized central government remains entirely ineffectual. Should IS-Yemen lure more highly trained and battle-hardened fighters from the Levant, the local offshoot of IS could become an increasingly ascendant force to be reckoned with in southern Yemen, adding new dimensions of complexity and instability to the country’s civil war and growing famine threat.