Can UAE be a bridge between the US, Sudan?

The UAE has persuaded the United States to lift sanctions against Sudan given Sudan’s efforts to counter Iran’s expanding and consolidating regional influence. 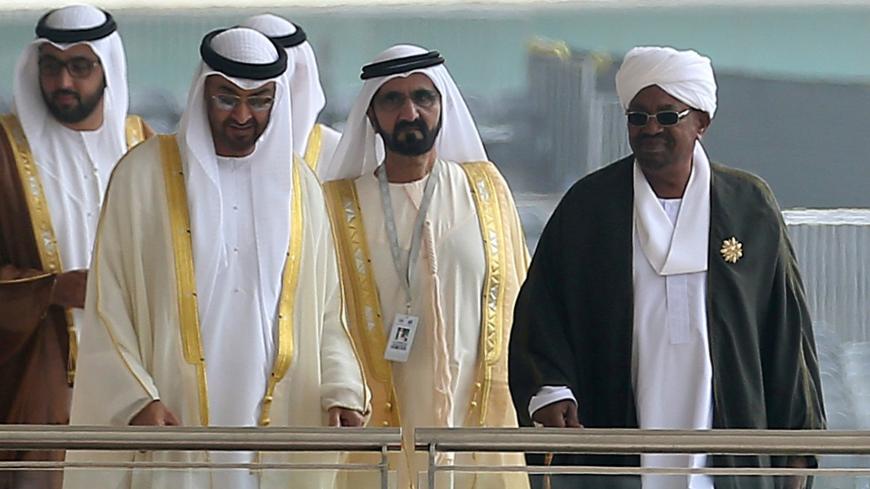 One of the targets of the so-called “Muslim ban” signed by President Donald Trump on Jan. 27 was Sudan. Last month, however, the Trump administration removed Sudan from the list and, on Oct. 6, the State Department announced the lifting of an array of sanctions that Washington had imposed on Khartoum since the 1990s. As reported by The Intercept on Sept. 25, Gulf Cooperation Council (GCC) members — specifically the United Arab Emirates (UAE) — have been seeking to persuade Washington that the time is opportune for a US-Sudan rapprochement despite their history of poor relations.

Abu Dhabi and other GCC capitals have sought to convince the United States that Sudan deserves to be included within Washington’s set of Sunni Arab allies/partners that are committed to the responsibilities that Trump called on leaders in the Arab/Muslim world to fulfill in Riyadh in May. The argument has largely rested on the fact that Sudan has recently made contributions to US and some GCC states’ efforts to counter Iran’s expanding and consolidating regional influence.

While it was just several years ago that Sudan and Iran were growing close politically, Khartoum has pivoted away from Tehran and moved within the GCC’s sphere of orbit since 2014-2015. In September 2014, Sudanese authorities shut down Iranian cultural institutions in the country. Since March 2015, Khartoum has deployed thousands of Sudanese forces to the Arab Gulf military coalition in Yemen, and in December of that year, Sudan joined the Saudi-led Islamic Military Alliance to Fight Terrorism. At the beginning of 2016, Sudan severed diplomatic relations with Tehran, officially in response to the Saudi-Iranian standoff following the execution of Sheikh Nimr al-Nimr.

To be sure, economic challenges and threats to the survival of President Omar al-Bashir’s regime prompted Sudan’s decision to shift toward the GCC. Having lost the majority of its oil and a third of its territory as a result of South Sudan’s independence in 2011 amid unresolved conflicts in Darfur, South Kordofan and Blue Nile, Khartoum determined that it was most strategically sound to turn to the Arabian Peninsula’s oil-rich states for financial backing. According to an interlocutor in the UAE, officials in Khartoum simply weighed the potential economic benefits of continued ties with Iran versus those of aligning more closely with the GCC. They concluded that abandoning Tehran was worth the financial assistance that the Arab states of the Persian Gulf could provide. Since Khartoum made the pivot, GCC members have provided Sudan with billions in assistance.

US-Sudan relations began improving during the final months of President Barack Obama’s administration. Although the State Department continues to designate Sudan as a state sponsor of terrorism, Washington eased some sanctions in January and numerous State Department reports acknowledged that Sudan had complied with the United States’ standards for countering global terrorist organizations such as al-Qaeda and the Islamic State. US diplomats have also documented how Khartoum’s patronage of armed Palestinian groups such as Hamas have essentially fizzled out.

Sudan’s inclusion in the set of countries targeted by the White House’s “Muslim ban” dimmed hope at first for significant improvement in Washington-Khartoum relations early on in Trump’s presidency. Yet the administration, which has recognized Khartoum’s improvement in the area of human rights, seems to be rewarding Khartoum for supporting Washington and its Sunni Arab allies in their quest to thwart Iran from further restructuring Middle Eastern societies via nonstate actors that challenge the region’s status quo.

After all, the United States and Sudan have been on the same side in the Yemeni civil war, with Washington and Khartoum playing key roles in strengthening the Saudi-led military coalition’s campaign against Iranian-backed Houthi rebels. The contradictory nature of US-Sudan relations was illustrated in 2015, when then-US Secretary John Kerry attended an investment conference in Egypt the same month that Saudi Arabia launched Operation Decisive Storm with Washington and Khartoum’s support and he left the room for the duration of Bashir’s speech before the audience. Within that context, it was not surprising in May when unspecified “special reasons” prompted Bashir to not attend the gathering of Arab/Muslim leaders in May in Riyadh to listen to Trump’s address. To be sure, a meeting of Secretary of State Rex Tillerson with Bashir would mark a watershed.

Underscored by Trump’s rhetoric about US national interests, not values, being the top priorities of the administration’s foreign policy decision-making, the idea of Trump pushing for further improvements in US-Sudan relations is not unthinkable. Of course, with Bashir’s status at the International Criminal Court, which has charged him with war crimes, any Washington-Khartoum rapprochement would meet no shortage of critics citing the Sudanese regime’s human rights record as a justification for not rewarding Bashir any more than Obama and Trump already have.

For the UAE, which is a close ally of both the United States and Sudan, bringing these two countries together to overcome problems that have plagued their bilateral relationship since President Bill Clinton’s administration would mark a major gain internationally for Abu Dhabi and other GCC capitals. Sudan is important to most Arab Gulf countries for a host of reasons, ranging from food security to the Yemeni crisis and counterterrorism efforts to trade and investment.

As the UAE is intent on growing its influence in the African continent, Sudan — the country where the Arab and African worlds meet — has a major role to play in Abu Dhabi’s foreign policy agenda, despite differing positions on the Libyan and Qatari crises and Khartoum’s cordial relationship with Turkey’s ruling Islamist party. A gradual opening (perhaps an eventual normalization) of Washington-Khartoum relations would unquestionably benefit Sudan, too, particularly given its current economic ills. Such a development would also help the UAE further convince Khartoum that its pivot toward Abu Dhabi and Riyadh, and away from Tehran, brought Sudan and its citizenry significant gains.

At a time when Iran’s growing clout throughout parts of the Middle East worries the Emirati leadership significantly, the Trump administration’s gestures toward Sudan signal to Abu Dhabi that the African country has been one area in the Arab world where the UAE has been playing its cards effectively to push back Iran’s extended hand.