US scrambles to curb damage from Saudi-Iranian fallout 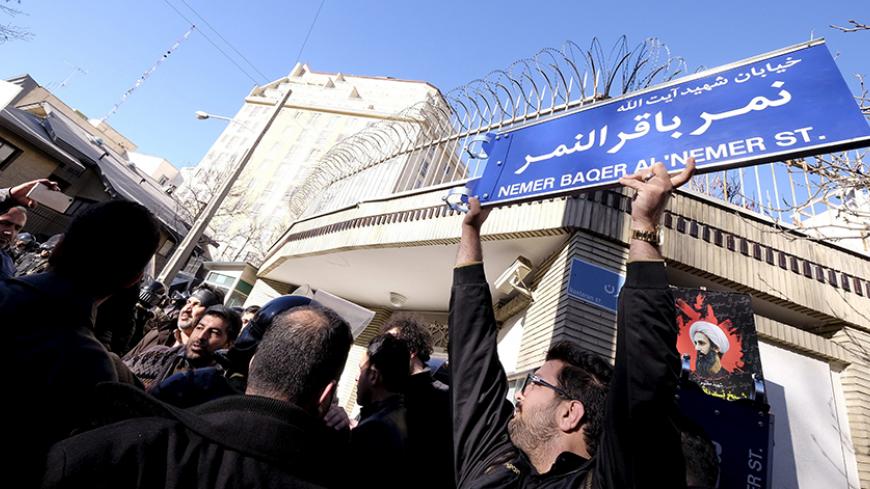 An Iranian protester holds up a street sign with the name of Shiite cleric Sheikh Nimr al-Nimr during a demonstration against his execution in Saudi Arabia, outside the Saudi Arabian Embassy in Tehran, Jan. 3, 2016. - REUTERS/Raheb Homavandi/TIMA

WASHINGTON — With long-sought UN Syria peace talks set for later this month at stake as well as the wider fight against the Islamic State, Washington and its allies were scrambling Jan. 4 to try to stem the fallout from Saudi Arabia’s abrupt decision to sever diplomatic relations with Iran following attacks on the Saudi Embassy in Tehran in the wake of the Saudis’ execution of a dissident Shiite cleric.

The State Department, responding to Riyadh’s Jan. 3 announcement that it was severing diplomatic relations with Iran and giving Iranian diplomats 48 hours to leave the country, urged maintaining diplomatic engagement and avoiding actions that could further inflame regional sectarian tensions.

“What we want to see is tensions caused by these executions reduced, diplomatic relations restored, so that the leadership in the region can focus on other pressing issues,” State Department spokesman John Kirby told journalists at the State Department on Jan. 4. “We have consistently urged everyone to deescalate tensions”

Secretary of State John Kerry worked the phones as he returned to Washington from a brief New Year’s vacation in Idaho, during which much of the painstaking diplomatic work he and allies had done the past five months to try to get both Iran and the Kingdom of Saudi Arabia to the Syria peace table looked at risk of being destroyed. Kerry spoke with Iran’s Foreign Minister Mohammad Javad Zarif on Jan. 3 and with Saudi Foreign Minister Adel al-Jubeir on Jan. 4, diplomatic sources said. He also spoke with UN Syria envoy Staffan de Mistura, who recently announced renewed talks between the Syrian regime and opposition would be held in Geneva on Jan. 25.

De Mistura, who was traveling to Riyadh on Jan. 4 to meet with Syrian opposition representatives before heading to Iran later this week, expressed alarm that the newly emerged diplomatic crisis could set back his efforts.

The “sudden and acute crisis” in Saudi-Iranian relations “is a very worrisome development,” he told The New York Times in an email Jan. 4. “We must at all costs avoid that it produces a chain of violent consequences in the region.”

While condemning the attacks on diplomatic facilities, former senior US officials who worked on the Middle East expressed puzzlement and dismay at the Saudi decision to carry out the execution of Saudi Shiite cleric Nimr al-Nimr, which was certain to stoke sectarian reactions across the region at such a sensitive moment.

It is “very unclear why the Saudis decided to do this now,” former Obama administration Middle East official Ilan Goldenberg told Al-Monitor by email Jan. 4. “A complete puzzle.”

“The US definitely thinks that Saudi-Iranian competition is one of the most destabilizing trends right now in the region and is making it very difficult to deescalate,” Goldenberg, now director of the Middle East security program at the Center for New American Security, said. “They view it as a major impediment and challenge. And it is not clear if there is much we can do about reducing these tensions."

He added, “It remains to be seen if this kills the Syria process. But it is hard to imagine the Saudis and Iranians continuing to sit in the same room.”

“We are kind of back to square one,” Philip Gordon, the former Obama White House top Middle East adviser, told Al-Monitor on Jan. 4. “To the degree that people hopefully wanted to see the Vienna process succeed, it required that Iran and Saudi Arabia be willing to sit at the same table and talk about a cease-fire and political process. … Our approach to the region has depended on a Saudi-Iran modus vivendi. That is all blown out of the water, at least for now.”

Saudi Arabia, in carrying out the execution and severing relations with Iran, may have been trying to send messages to both domestic and international audiences about its resolve against what Riyadh perceives as Iranian expansionism in the region, but it may have miscalculated how the messages would be received, he said.

“It is a sign of insecurity,” Gordon, now a senior fellow at the Council on Foreign Relations, said. “I do worry that it is a miscalculation.”

“One of the things the Saudis worry about is that people [including in the US administration] come to the conclusion that Iran, while we have problems with it, could be a partner … [and] we should start working with them,” he said. “With this, the Saudis are saying, that won’t work — choose sides.”

“I don’t think the Obama administration is … going to decide, let’s double down on Saudi, pull the plug on the Iran nuclear deal and militarily intervene in Syria,” he said. “The administration feels like they have already been trying to reassure the Saudis. So how much do you need to do? … At what point does it work?”

Former US Ambassador to Syria Robert Ford said the latest rupture in Saudi-Iranian relations puts a damper on already low prospects for success at the forthcoming Syria peace talks.

“Chances for success at peace talks in January/February 2016 are pretty low to begin with,” Ford, now a senior fellow at the Middle East Institute, said by email Jan. 4. “Neither the Russians/Iranians on one side, and [the] Turks/Saudis/Qataris on the other side appear prepared to exert serious pressure on their clients in Syria to make hard concessions that would be necessary to reach a deal this year.”

“The latest tension between the Saudis and Iranians will likely further entrench these two actors in their current policies,” Ford said. “Indeed, I would anticipate that the Saudis/Turks will boost aid to the Syrian rebels in the days ahead if they have not already done so.”

“Finally, it is also important to note that American leverage with the Saudis appears limited now,” Ford added. “If the Americans were informed in advance about Sheikh Nimr's impending execution and despite Washington remonstrations the Saudis went ahead with the execution, then we have the latest example. Similarly, Washington appears to have little to no leverage with the Russians and the Iranians.”

Randa Slim of the Middle East Institute said that Saudi decision-making had always been somewhat opaque to the United States, but that the government under King Salman bin Abdul-Aziz Al Saud seemed to be more in the grip of “groupthink” and lacks the moderating voices such as that of the late former Saudi Foreign Minister Saud al-Faisal.

“Now [decision-making in Saudi Arabia] is even more opaque and restricted to a very small group of people,” Slim told Al-Monitor. “There is more of a groupthink process going on. … And we do not have the balancing voices within that leadership group.”

Nevertheless, the United States should do what it can to step up engagement with Riyadh and Iran to try to prevent the situation from escalating, Slim advised.

“I think across the board we need to use whatever leverage we [United States] have with the Saudis, with the Iranians … [and] to try to push leaders in the region who have access and who are respected by Saudi decision-makers … to use their good offices to send strong messages to the Saudis and [the] Iranians … to stop this escalation spiral in its tracks,” Slim said.