Iran's supreme leader has once again penned an open letter to the young people of the West; however, many of those sharing his message via Twitter had their accounts mysteriously suspended. 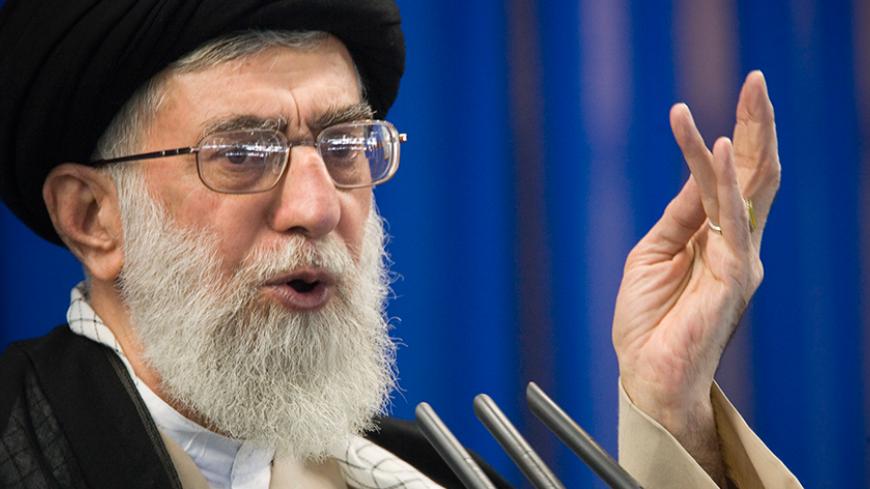 “The bitter events brought about by blind terrorism in France have once again moved me to speak to you young people,” wrote Iran’s Supreme Leader Ayatollah Ali Khamenei in his second letter addressed to the “youth of the Western countries.” Khamenei’s accounts on Twitter, Facebook, Instagram and other social media platforms posted excerpts of the Nov. 29 letter with the hashtag #CommonWorry along with posters and banners in what appears to be a major campaign by his media team. Khamenei published his first such letter on his website in January.

“Today, the people of the East and the West are sharing common worries,” a source close to the supreme leader’s office in Tehran told Al-Monitor on condition of anonymity. “This is a new way of communicating with the other side, to break all artificial boundaries and the deadlock caused by those who don’t want this world to live together in peace and with respect.”

The idea for the letter, according to the same source, came about after the string of attacks that hit several places around the world within a brief span of time. “The attack on the Russian plane, then the bombing in Beirut and later the parallel attacks in Paris were a clear indication that the whole world, despite differences, is facing a serious threat, and there is by all means a common pain and common concern,” the source emphasized, adding, “This feeling of solidarity with all victims of terror, whoever and wherever they are, prompted the leader to take the time to write the letter.”

The 2,000-word piece gave Khamenei’s thoughts, in his own words, on the reasons for the wave of terror hitting the world. Of note, while showing his equanimity toward the youth of the West, he did not drop his accusation that the major Western powers are partially or fully responsible for the current situation. “The military invasions of the Islamic world in recent years — with countless victims — are another example of the contradictory logic of the West,” he argued, explaining, “The pain that the Islamic world has suffered in these years from the hypocrisy and duplicity of the invaders is not less than the pain from the material damage.”

When asked why Khamenei’s media team did not publish the letter as an article in any of the well-known Western newspapers or media outlets, the source told Al-Monitor, “The leader is keen to have direct engagement with youth; he wants the young man or lady in Boston, Manchester or Berlin to feel that he’s talking to him or her directly, despite the fact that he knows how ugly the stereotype is that’s being spread there about Iran.” The source added, “He wanted to set a better environment for dialogue, so that young generations of the West and the East can make use of it rather than fight.”

There were other reasons for solely using social media to publish the letter, according to the source close to Khamenei’s office. “Even if we published in a mainstream media outlet, the letter wouldn’t have the same reach,” he said, elaborating, “The controlled media of the West are always capable of setting limits; they are free as far as freedom isn’t affecting the big system they belong to, but when a serious counternarrative appears, they aren’t ready to give it the appropriate space. They might talk about it. Still, they’ll try to ridicule its content, cause and means. The leader’s team is aware of all that. Therefore, they choose the wider media, the social media, even though it’s becoming clear that there were attempts to silence those who tweeted or retweeted the letter, mainly those in Iran.”

Iran’s semi-official Fars News Agency reported Nov. 30 that Twitter had suspended accounts that tweeted the Iranian supreme leader’s letter, reporting, “Account holders in and outside Iran received messages from the social network saying that Twitter’s automated system had flagged them for sending spam messages.” The Fars report added, “Some of the accounts were reactivated following an apology message from the network warning them to avoid sending similar messages, but the accounts were suspended a second time as soon as they sent another tweet about the leader’s message.”

Al-Monitor contributor Abas Aslani, who heads the international section of Iran’s Tasnim News Agency, said, “I was temporarily suspended two times. I was not sure the first time that this was the reason, but the second time when I again tweeted the leader's letter with a link, I was suspended in a minute.” Aslani said he later received a message from Twitter that read, “We apologize for this inconvenience. It’s possible your account posted an update that appeared to be spam, so please be careful what you tweet or retweet.”

With Khamenei’s second letter to Western youth published and circulated, what will it really mean in the context of Iran’s yet undetermined relations with the West, and especially the United States? The fact is that something is changing among Iran’s top ranks, in parallel with similar changes below. A decision to engage with the world has been made, but this doesn’t mean engagement with all governments.

To Iran’s supreme leader, Washington is still the “Great Satan,” and this doesn’t appear likely to change anytime in the near future, even if it changes at lower levels in the country. It is true that Khamenei wrote his letter to the youth. However, reading into its details, it says, paragraph after paragraph, that it is written for younger people so that older people can also read what is perhaps Khamenei’s personal recipe to the West in general, and the United States in particular, for how to stop being the “Great Satan.”