Zarif: US must decide between deal, sanctions 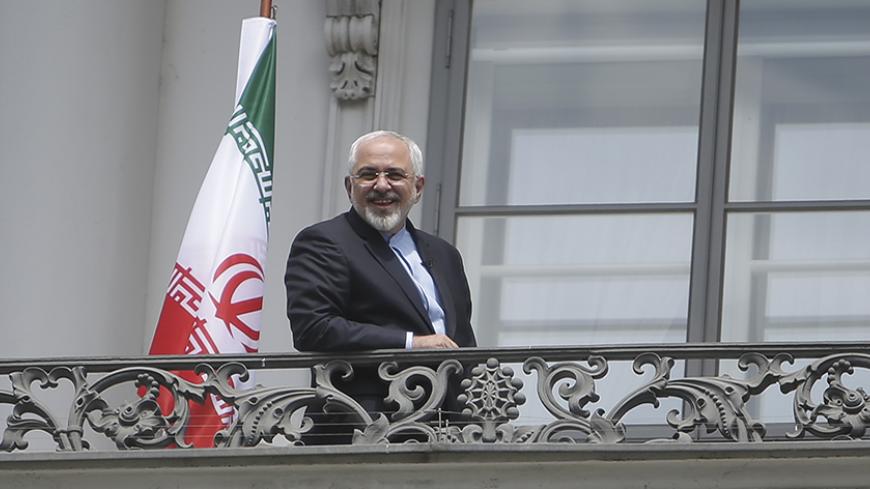 On a day when the temperature in Vienna matched the heat of the talks between Iran and six world powers, Mohammad Javad Zarif found time to enjoy the warmth of the sun on the balcony of his suite. Iran’s foreign minister seemed to be saying July 2 that he was in no hurry and was happy to sit back and enjoy the weather.

Two days earlier, on June 30, I met Zarif for almost an hour and half. It was an opportunity to understand the real situation, how things are progressing, and whether it will still be possible to see him and his counterparts put pen on paper in the coming days. While most of what was said in that session remains off the record, there were a few things that can be shared to clarify what is happening and make it easier to understand what Iran’s top negotiator thinks about one of the most decisive challenges in his life.

According to Zarif, engaging with the six world powers was a strategic decision taken by Iran, which is ready to see it through to the end. He explained how his commitment helped him keep his patience, even when it was sorely tried, and how he might have reacted differently had the issue not been of such importance to his country and the region.

When asked about the red lines set by Iranian Supreme Leader Ayatollah Ali Khamenei and whether they made reaching a deal impossible, Zarif replied, “Nothing the supreme leader said is new; this is the persistent position of Iran from the day we started the negotiations.” On the first day of negotiations, the supreme leader’s account on Twitter posted a picture of Zarif and his team along with a tweet that read, “I recognize our negotiators as trustworthy, committed, brave and faithful.” When recalling the post, Zarif gave a happy smile and said, “This picture is in Natanz, along with the team; the leader’s support is very important for our team.”

Despite having the support of Khamenei, Zarif and his team have faced a fierce campaign from hard-liners in Tehran, especially after the United States issued its fact sheet in April. This was despite the fact that both the American and the Iranian team agreed to stick to the statement by European Union foreign policy chief Federica Mogherini and Zarif at the announcement of the framework deal. The Iranian minister, according to his aides, preferred not to respond in order to keep the talks on the right track.

All Zarif is looking for right now is to end this chapter. He respects US Secretary John Kerry’s commitment. “John is a reasonable man,” Zarif said, yet he thinks that the United States has to decide whether it wants a deal or sanctions. “The deal will be made or broken on whether the United States wants to lift the sanctions or keep them,” Zarif said.

Al-Monitor's session with Zarif came to an end with many questions remaining, but it was an opportunity to understand the broader context of the talks and remaining sticking points from the Iranian standpoint.

As talks continued in Vienna, several foreign ministers from the countries taking part streamed into the city. A Western diplomat explained how efforts are being exerted to overcome differences. “The main issue is that all parties have a will to reach a deal,” he told Al-Monitor on condition of anonymity. “This is a very sensitive issue, so you don’t expect states to risk world security [just] because they trust each other; everyone needs assurances, and until all parties are completely assured there will be no deal.”

Information acquired by Al-Monitor through multiple sources showed that the six world powers made Iran an offer on the issue of inspections. The sources said a commission would be formed to look into disputes when the International Atomic Energy Agency (IAEA) seeks access to certain sites. If Iran refused to give access and the IAEA’s case was strong, then the commission would look into the issue and vote and a simple majority would determine whether the IAEA would be given or denied access. The offer is still awaiting acceptance from Iran, whose officials preferred not to comment on the issue.