US 'hopeful' on final Iran deal

The United States sees a path to reaching a “very good” Iran nuclear deal, but tough decisions will have to be made, according to a senior US official, as John Kerry and Mohammad Javad Zarif were set to join the talks in Vienna. 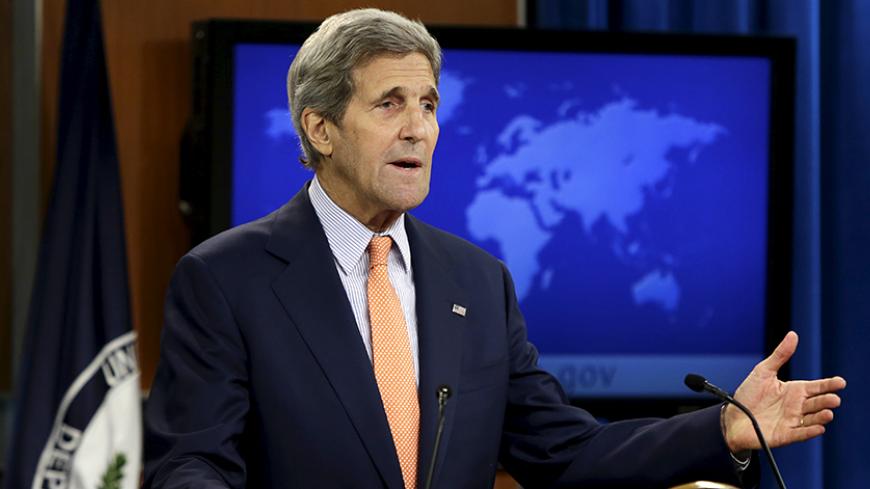 US Secretary of State John Kerry holds a briefing at the State Department in Washington, June 25, 2015. - REUTERS/Gary Cameron

The United States is hopeful and sees a path to reaching a “very good” Iran nuclear deal in the coming days, but tough decisions will have to be made to finalize the accord, a senior US official said June 25, ahead of what is expected to be an intense, marathon final round of negotiations getting underway in Vienna this weekend.

US Secretary of State John Kerry will fly to Vienna June 26 to meet with Iranian Foreign Minister Mohammad Javad Zarif. US Energy Secretary Ernest Moniz will also attend the Vienna talks. However, Moniz’s Iranian counterpart, Ali Akbar Salehi, the head of the Atomic Energy Organization of Iran, is not expected to come to Vienna, sources said, apparently for health reasons.

“We can truly see a path forward that gets us to a very good agreement here,” the senior US administration official, speaking not for attribution, told journalists on a phone call June 25. “We believe there are technical solutions for every issue on the table.”

But “tough decisions” will have to be made at the ministerial level, the US official said. “All of us, but particularly the Iranians … have some critical choices to make.”

All the parties understand what is needed to conclude a final deal based on the framework accord reached in Lausanne, Switzerland, on April 2, the US official said, but there are still many details that need to be nailed down.

“So I am hopeful, but it still remains to be seen if we can get there,” the US official said.

Among the “trickiest” final issues to resolve are the timing and pace of sanctions relief, and the details on access and transparency, the US official said.

Iranian officials said everybody was working hard to find solutions to remaining issues.

“We are doing our best to resolve all the issues,” a senior Iranian official, speaking not for attribution, told Al-Monitor June 25. “Everybody is working hard. If we can't finish it by June 30, we'll extend for a few days.”

US officials said they were not overly focused on recent comments from Iran’s Supreme Leader Ayatollah Ali Khamenei that set out more red lines for a final accord, but rather on what was being discussed inside the negotiating rooms, the US official said. “What always matters most to us is what happens inside the negotiating room and if Iran upholds its commitments … as it has.”

Zarif, announcing on Twitter that he was traveling to Vienna, cited Khamenei to warn world powers against “excessive demands.”

Ali Vaez, senior Iran analyst at the International Crisis Group, urged both sides to avoid excessive posturing in the endgame of the final deal talks, and stick to the Lausanne framework.

“Both sides are prone to miscalculation,” Vaez told Al-Monitor June 25. “Their key to success is to refrain from public posturing and remain faithful to the Lausanne Framework.

“None of the remaining differences pose an insurmountable obstacle to reaching an agreement,” Vaez said. “Minor adjustments within the Lausanne Framework could allow both sides to protect their core interests.”

Among the most difficult issues to resolve are the series of steps Iran would agree to take to resolve concerns by the International Atomic Energy Agency (IAEA) about possible military dimensions of Iran’s nuclear program. Iran denies ever pursuing research for a nuclear weapon.

The United States does not require an Iranian “confession” if it engaged in nuclear military research, but it does require that the IAEA’s concerns be addressed, if not resolved, officials suggested.

Robert Einhorn, former arms control adviser to Sherman’s negotiating team, said the P5+1 (members of the UN Security Council plus Germany) was trying to reach agreement with Iran on a list of steps it would agree to take to resolve IAEA’s PMD questions. The list of steps would not need to be completed to conclude a deal, he said, but would need to be taken to get US and EU sanctions relief (along with other commitments in the Lausanne Framework: to reduce the number of centrifuges at Natanz to 5,000; take the core out of the unfinished Arak plutonium reactor; and stop uranium enrichment at Fordo, which, under the agreement, would be converted into a scientific research center.)

“I think what the US and its P5+1 partners have done is come up with a list of steps that Iran must take to deal with concerns about their past activities,” Einhorn said.

“But the sequencing is important,” Einhorn said. The P5+1 is trying to reach agreement with Iran “on the list of steps. But actual implementation would take place after the deal is reached. … But Iran would have to fulfill the items on the list before significant sanctions relief would be given.”

But Ilan Goldenberg, a former Pentagon and State Department Middle East official in the Obama administration, said the PMD issue is less important than ensuring Iran never have a weapons program again, which the Lausanne Framework deal would provide.

“We are never going to know everything on the PMD front,” Goldenberg, now a senior fellow at the Center for New American Security, told Al-Monitor June 25. “The key is to know what we need to know to make sure it doesn’t happen again.”

​“The key on the inspections front is most of this has already been agreed to be based on the Iranians agreeing to [implement] the Additional Protocol,” Goldenberg added.