Iran talks may go into overtime

Negotiators are focused on the June 30 target for reaching a final Iran nuclear deal, a US official said June 10, but brinksmanship may push Iran talks past the deadline as each side waits to see if the other will make concessions. 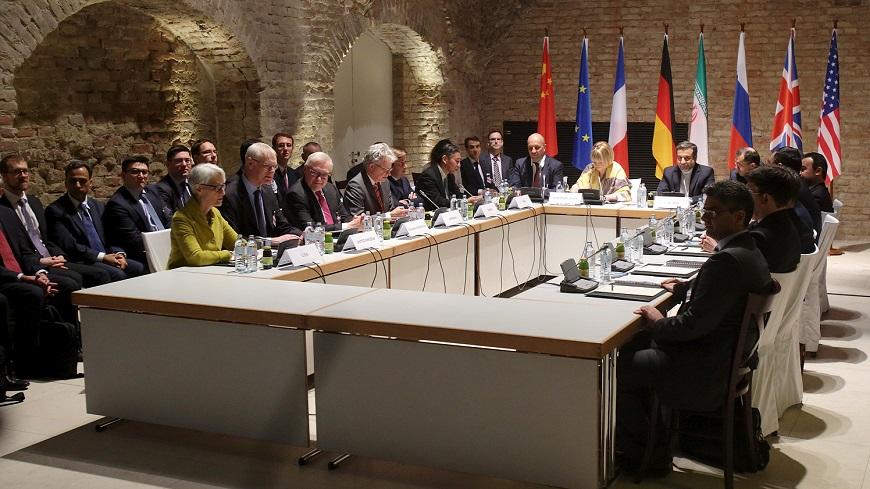 Negotiators of Iran and six world powers face each other at a table in the historic basement of Palais Coburg Hotel in Vienna, April 24, 2015. - REUTERS/Heinz-Peter Bader

Negotiators are focused on the June 30 deadline for reaching a final Iran nuclear deal, but it is more important to get the details right and a good agreement, a senior US official said June 10, as some former US officials and experts suggested negotiations are likely to go into overtime, as each side waits to see if the other will make concessions as the deadline looms.

“Everyone in the room is focused on June 30,” the senior US administration official, speaking not for attribution to discuss the talks between six world powers and Iran, told a small group of reporters in a call June 10. “It doesn’t help any of us to delay difficult decisions. They get harder over time.”

An Iranian official described the Iranian position on the deadline in almost the same terms.

"We don't intend to go beyond the deadline. At the same time, we are not pressurized by time," the senior Iranian official, speaking not for attribution, told Al-Monitor June 11. "We are determined to have a good deal."

Lead US negotiator Undersecretary of State Wendy Sherman returned to Vienna June 11, where expert teams from six world powers, the European Union and Iran have continued work drafting the technical annexes to a comprehensive deal. Lead EU negotiator Helga Schmid has also been meeting with Iranian Deputy Foreign Ministers Abbas Araghchi and Majid Takht-Ravanchi in Vienna this week, and they will be joined by Sherman and the other political directors from the P5+1 (the five permanent members of the UN Security council plus Germany) at a meeting June 12.

Progress in resolving the final remaining issues has been slow since the reaching of the framework deal in Lausanne, Switzerland, April 2, negotiators have said, even as they express overall cautious optimism about the trajectory of the final deal talks. They said it is a normal dynamic of negotiations that hard bargaining and compromise comes at the later stages and sometimes beyond. Tough issues in the post-Lausanne negotiations include how to resolve the International Atomic Energy Agency’s questions about possible past military dimensions of Iran’s nuclear program, with Iran’s supreme leader, Ayatollah Ali Khamenei, having publicly forbidden the granting of access to scientists and military sites.

“As we expected, after Lausanne, the next portion of this process will be pretty tough,” the US official said, describing the end stage talks — as at earlier points in the negotiations — as something of a roller coaster.

“Events happening all over the world challenge this negotiation on a daily basis,” the US official said. “No time is better than the present to make these difficult decisions.”

Iranian negotiators, for their part, have suggested they are not overly concerned about the June 30 deadline, and said it is up to the other side not to raise excessive demands.

“If the opposite side does not come up with excessive demands, the negotiations will lead to a result by the announced deadline,” Ravanchi, Iran’s deputy foreign minister for European and American affairs, said at a meeting with the chairman of the European Parliament Committee on Foreign Affairs, Elmar Brok, in Iran June 7, Iran’s Press TV reported.

“We are not at the point where we can say that negotiations will be completed quickly … they will continue until the deadline and could continue beyond that,” Araghchi said May 27, Iran’s Al-Alam news agency reported.

Some current and former US officials believe the negotiations are likely to go at least into July, as both sides try to use the pressure of the deadline to see if the other side will make compromises first. While the United States would not like to see the negotiations drag out into the fall, the Iranians need to move to make the final decisions necessary to conclude the deal, current and former US officials say.

“Given the significant issues still unresolved as well as the crucial technical details still to be agreed, it is very hard to imagine that a satisfactory comprehensive agreement can be achieved by the June 30 deadline," former US Iran nuclear negotiator Robert Einhorn wrote in The National Interest this week.

“Indeed, Iran may be counting on the fast-approaching June 30 terminal date to put pressure on the United States to make concessions on unresolved issues and settle for less detailed technical annexes,” Einhorn added.

“But meeting US requirements for a sound agreement is clearly more important than meeting a self-imposed deadline,” Einhorn wrote. “Indeed, it is Iran, not the United States, that should feel pressure to finish this month. … The United States can well afford to take the additional several weeks, or even several months, to ensure that its requirements are met.”

Deadline brinkmanship is a normal dynamic in such negotiations, noted John Isaacs, a senior fellow at the Council for a Livable World and Center for Arms Control and Non-Proliferation.

“Both sides are withholding any final compromises until the last possible moment because they don’t want to have to compromise now and then compromise further later,” Isaacs told Al-Monitor June 11. “Both sides hope they will get a little more if they go beyond the deadline.”

Under the recently passed Corker-Cardin Iran review legislation, if the US administration does not submit the Iran accord to Congress for review until after July 9, then Congress gets 60 days versus 30 days to review it, meaning US sanctions relief would be delayed further.

In some ways, the Corker legislation, which was initially opposed by the Obama administration, “has punctured the pressure” on the US administration to conclude the deal by June 30, Isaacs said. “Congress now has a role. ... They get a vote, whether the deal happens June 30 or July 15 or Aug. 15. In the meantime, there are lots of other things to deal with.”