Zarif travels to Iran after nuclear talks with Kerry

Iran Foreign Minister Mohammad Javad Zarif departed nuclear talks with US Secretary of State John Kerry and P5+1 diplomats in Vienna June 28 for consultations in Tehran, as officials say they will need a few days past the June 30 deadline to try to conclude the nuclear deal. 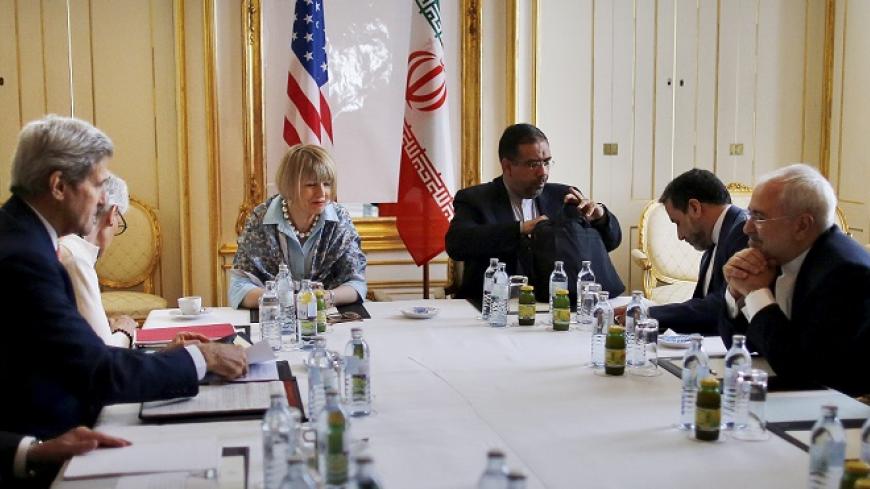 Vienna — There were conflicting signals as Iran’s Foreign Minister Mohammad Javad Zarif returned to Tehran late on June 28, after just over a day of talks with US Secretary of State John Kerry and European foreign ministers, saying he would return to Vienna June 30, as Western and Iranian diplomats acknowledged reaching a final nuclear deal would take a few more days.

Iranian officials said June 28 that Zarif had planned in advance to return to Iran for a day or two once it became apparent it would take longer than the self-imposed June 30 deadline to reach a final Iran nuclear deal with six world powers. But a senior State Department official, speaking not for attribution June 28, said Zarif informed Kerry June 27 that he planned to travel to Iran the next day. Sources who met with Zarif late June 27 said he had given little indication that he had firm plans to return to Iran the next day.

US officials suggested they thought Zarif was returning to Iran to get further guidance or instructions from his bosses.

"Ministers come and go," a senior US administration official speaking not for atribution said June 28. "It's a good thing if they need to get guidance … if people need to go back to capitals and have conversations with [their] leadership. We can go beyond June 30 if we need additional time, given the date and the fact that we still have more work to do," the US official said.

The shifting Iranian explanations for the purpose of Zarif's trip seemed aimed in part at putting a veil of ambiguity over what seemed most likely: that Zarif would be consulting with Iranian leaders about a proposal or proposals he had heard from Kerry and the other P5+1 ministers (the permanent five UN Security Council members plus Germany) and diplomats about how to resolve remaining issues to reach the final deal, and seek further instructions. Those include what steps Iran would agree to take to address concerns by the International Atomic Energy Agency (IAEA) about past possible military dimensions (PMD) of its nuclear program, particularly the sensitive issue of the IAEA’s desire to have access to scientists and military sites to better understand Iran’s nuclear program; the access Iran would grant the IAEA to ensure Iran’s nuclear program going forward is entirely peaceful; and the research and development Iran could conduct from years 11 to 15 and beyond on advanced centrifuges.

The last issue in particular is one that US officials believe could be advanced by the presence of Iran’s atomic energy chief Ali Akbar Salehi, who has not been able to travel abroad since undergoing two surgeries shortly after the framework agreement was reached in Lausanne, Switzerland, on April 2.

An Iranian official speaking not for attribution June 28, told Al-Monitor that Zarif may see while in Iran if Salehi’s health permitted him to travel back with him to Vienna. Zarif is also likely to be accompanied upon his return by Hossein Fereydoun, the brother of Iranian President Hassan Rouhani, a former Iranian diplomat in New York close to Zarif who was also present at the negotiations leading up to the reaching of the Lausanne framework deal. Zarif would also in Iran consult with his bosses, including Rouhani and likely Iranian Supreme Leader Ayatollah Ali Khamenei, an Iranian official said, even if the Iranians did not want to make explicit what consultations exactly Zarif planned to have, Iranian sources suggested.

It is not unexpected that the Iranians would seek more instructions if they feel that is what is needed, a Western official speaking not for attribution said June 28.

“I think things will be opaque for the next 36 hours, and then they are going to be clear,” Daryl Kimball, executive director of the Arms Control Association, told Al-Monitor June 28. “They are keeping you guys in the dark for a reason.”

While Iranian officials have suggested to Iranian media this week in Vienna that Western powers have, in their opinion, backtracked on some of what they agreed to in the April 2 Lausanne framework deal concerning centrifuges at the underground Fordow facility in a final deal, they have also told outside experts that the issue of the timing of the lifting of sanctions in a final deal has more or less been resolved between Iran and the P5+1, Trita Parsi, president of the National Iranian American Council, reported.

European officials have also suggested the remaining issues to be resolved to complete a final deal have narrowed to PMD and access to nuclear facilities.

“Obviously we are at a critical stage now,” a senior Western diplomat speaking not for attribution said June 27. “It’s become more tense in the final days. But that was always likely to happen.”

“We have the political will to finalize the deal,” European Union foreign policy chief Federica Mogherini told journalists as she was preparing to depart Vienna after meeting with Zarif and P5+1 ministers and diplomats June 28. “Work is proceeding well. … The remaining open points are mainly … on how to translate the political understanding that we reached already into concrete details."

"Postponement is not an option," Mogherini added. "We will use the time we need, but it is going to be a matter of days and not more.”