Reality of deal sets in for Iran, P5+1

A senior US negotiator suggested that all parties, but particularly the Iranians, may be experiencing some eleventh-hour jitters. 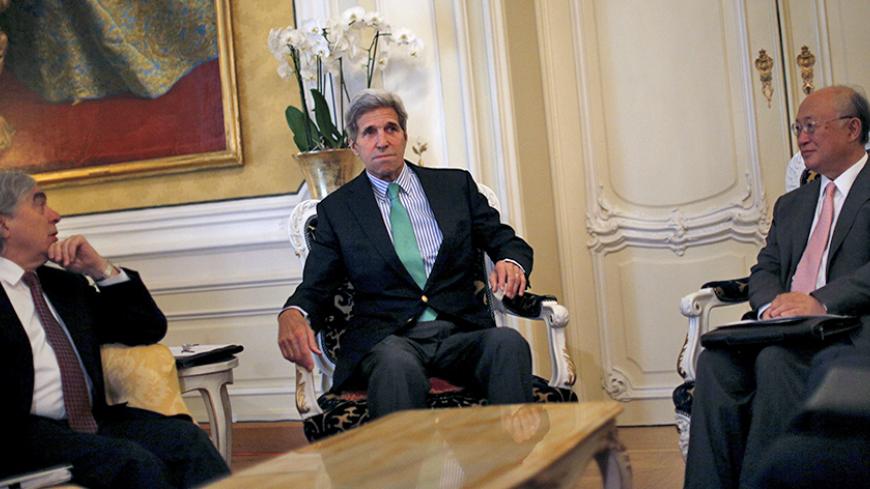 US Secretary of State John Kerry sits between US Secretary of Energy Ernest Moniz (L) and International Atomic Energy Agency Director General Yukiya Amano during a meeting at a hotel in Vienna, June 29, 2015. - REUTERS/Carlos Barria

VIENNA — Nuclear talks were poised to intensify and go into overtime as a senior US negotiator suggested that all parties, but particularly the Iranians, may be experiencing some eleventh-hour jitters about the broader implications of concluding the nuclear accord they have all moved so far down the path to reach.

“We and the Iranians understand that this is a very important moment in the talks,” a senior US administration official, speaking on condition of anonymity, told journalists June 29. “It is certainly possible to get a deal here, and we do see a path forward to get an agreement that meets our bottom line.

“But there are real and tough issues that remain which have to be resolved to get a comprehensive agreement, and we still don’t know yet whether we will be able to get there,” the US official said. “We want to, we hope, but we do not know.’’

Russian Foreign Minister Sergey Lavrov is also expected to come to Vienna on June 30 and to meet with US Secretary of State John Kerry, US officials said.

Diplomats said they hoped that Salehi’s presence could help accelerate the reaching of solutions on some “tricky” remaining issues in the talks left unfinished or ambiguous in the framework deal reached in Lausanne, Switzerland, on April 2.

But officials hinted they sensed that the last hiccups to a final deal may not fundamentally be only about technical matters or even about the nuclear issue in itself, so much as about how Iran in particular conceived its identity in the wake of the 1979 Islamic Revolution.

“That is very tough, and making this decision to do the Joint Comprehensive Plan of Action [JCPOA, the formal name of the prospective final Iran nuclear deal] is a very big decision,” the US official said.

Iranian politicians are struggling in recent weeks with how to reconcile the prospective nuclear deal with the Islamic Republic’s revolutionary identity, said Adnan Tabatabai, a Berlin-based political analyst of Iranian affairs.

For Iran, “this is about more” than a nuclear deal, Tabatabai told Al-Monitor on June 28. It can potentially make way for a new era in Iran’s foreign policy, he said.

“In the end, it goes back to the key principles of what the revolution is about,” Tabatabai said. “’Some say, 'We are an anti-imperialist revolutionary state. We are not willing to give in to the supreme powers.’ They will have to say we made the six most powerful countries in the world acknowledge our right to enrichment, force them to accept that we maintain what we achieved; at the same time, they will have to say we remained the unshakeable one."