Iranian President Hassan Rouhani wrote US President Obama and called other P5+1 leaders as foreign ministers from six world powers are expected to join Iran talks over the weekend to try to reach a political agreement on an Iran nuclear deal by March 31. 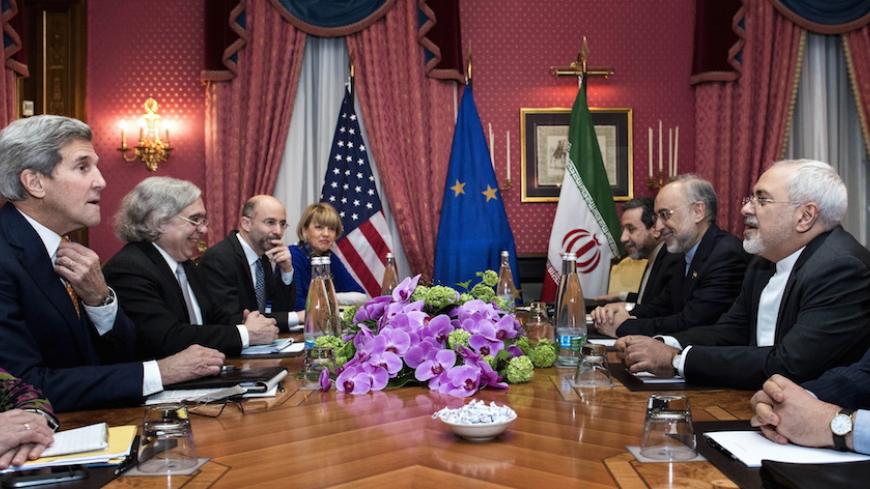 LAUSANNE, Switzerland — The White House said that a letter from Iran President Hassan Rouhani for US President Obama had been passed to US negotiators here, as top US and Iranian diplomats and nuclear experts held another intense day of closed-door meetings March 26 as negotiators try to finalize a political agreement for a final Iran nuclear deal by next week.

"I can confirm that a letter from President Rouhani to President Obama was passed to the US negotiating team in Lausanne,” Bernadette Meehan, the spokesperson for the National Security Council, told Al-Monitor in an emailed statement.

Rouhani also sent letters to the other leaders of the P5+1 (the five permanent members of the UN Security Council plus Germany), he said on Twitter, and held phone calls March 26 with British Prime Minister David Cameron, French President Francois Hollande, Russian President Vladimir Putin and his Chinese counterpart.

Cameron and Rouhani, in their first phone call ever, “expressed their commitment to securing a deal,” a spokesperson for Cameron said in a read-out of the call. “They both agreed that the ongoing discussions in Switzerland and the possibility of securing a political framework by the end of the month presented a historic opportunity.”

Cameron “also pointed out that Iran needed to address the concerns of the wider international community by showing that Iran’s nuclear program was being developed exclusively for peaceful purposes,” the read-out said.

Kerry and Iran Foreign Minister Mohammad Javad Zarif held over 2½ hours of one-on-one talks today, in addition to talks with their broader teams. US Energy Secretary Ernest Moniz and the head of the Atomic Energy Organization of Iran Ali Akbar Salehi and technical experts also met throughout the day.

Political directors from the P5+1 and Iran held a plenary meeting here this evening, and are expected to hold another round the morning of March 27, Iranian Deputy Foreign Minister Abbas Araghchi told Iranian media.

Other foreign ministers from the P5+1 are expected to arrive here on the weekend, with France’s Laurent Fabius set to arrive March 28. Russia’s Foreign Minister Sergey Lavrov may come on March 29, Russia’s Sputnik News reported, though it has not been officially confirmed.

In terms of timing for a possible announcement, while the Iranians have suggested it could happen as early as March 29, there are other indications it may go down to the wire March 31.

“My hunch: a deal is possible within three-four days, but the stakes are very high and the risks people (especially John Kerry and Javad Zarif) are taking, even higher,” former Russian diplomat Sergey Batsanov told Al-Monitor March 26. “That suggests they may need for a high drama on Sunday [March 29] and another postponement for a couple of days to negotiate perhaps not the deal itself, but some additional lubrication devices.”

"I think the US negotiating team has a justifiable sense of optimism, but it is not done until it's done," Daryl Kimball, executive director of the Arms Control Association, told Al-Monitor March 26.

Kerry's meeting with the EU3 foreign ministers in London March 21, after the last round of talks with the Iranians in Lausanne March 15-20, "did smooth things over … so the P5+1 go into this round with a common position," Kimball said.

In the last round, the Iranians dug in their heels on the issue of the lifting of UN Security Council sanctions in part because of the letter from Sen. Tom Cotton (R-Ark.) last month to Iran's leaders.

Threatening that the next US administration would not honor any deal with Iran that Obama makes, Kimball said, “sucked up a lot of time at the last meeting,” as the Iranians “focused on when and how the lifting of UN Security Council resolutions will be addressed. It gave them more leverage on the UN Security Council issue. Which is not good."

On the March 26 Association Press report stating that Iran may be able to keep some centrifuges to enrich nonfissile material for medical uses at the Fordo enrichment site, Kimball said it all depends on the details. "How many centrifuges, what type, what you feed into them, what configuration," Kimball said. It is not surprising, he said, "if you have been paying attention," given that the idea that Fordo would be repurposed for research and development and nonuranium enrichment purposes in a final deal is something that has been discussed in the negotiations all the past year.