While progress has been made, Iran negotiators are looking to resolve differences with the P5+1 on the issues of research and development and lifting of UN Security Council resolutions. 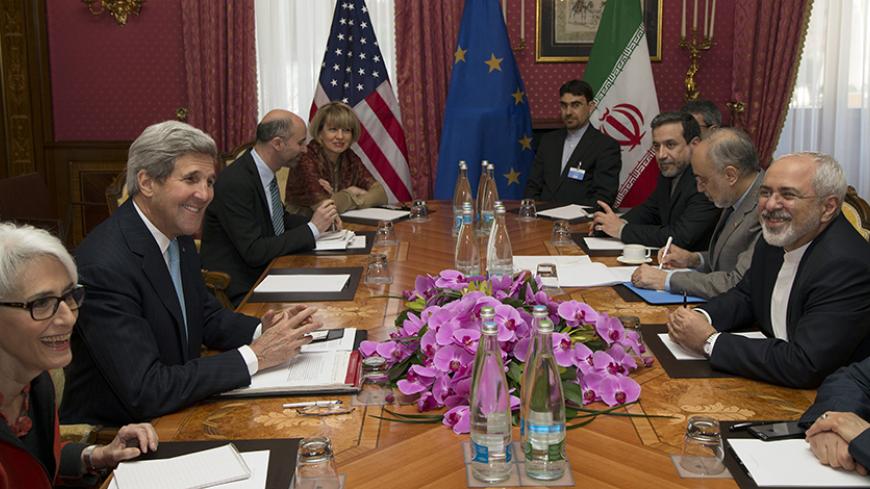 LAUSANNE, Switzerland — With substantial progress made on some of the toughest elements of a final nuclear deal in recent weeks, Iran and the six world powers (UN Security Council plus Germany, or P5+1) find themselves struggling to resolve differences over two seemingly more peripheral issues at meetings here this week. They involve the scope of research and development on centrifuges that Iran can conduct during the period of a final nuclear accord, and Iran’s desire for the lifting of UN Security Council sanctions on its nuclear program that it sees as treating Iran as a pariah state.

The hold-up is likely to require negotiators to return next week to try to complete a political accord on major elements of a final nuclear accord that diplomats had hoped to complete this week, ahead of a self-imposed end of March deadline and the threat of new Congressional Iran sanctions.

Iranian Foreign Minister Mohammad Javad Zarif, speaking to Iranian journalists the morning of March 18 ahead of meetings with US Secretary of State John Kerry, said he did not anticipate other foreign ministers from the P5+1 joining the talks here at this lakeside Swiss city this week. The comments were seen as a signal that he anticipated negotiators were likely to have to continue work next week to complete a political accord, if remaining differences can be resolved.

"I don't think their presence will be needed in this round because when the solutions are found and we approach a deal, then all the foreign ministers of the negotiating parties should come," Iranian state media cited Zarif, AFP reported.

"There are differences and we are trying to reduce them," Zarif said. “We must find solutions.”

The American and Iranian teams were joined March 18 by political directors from the P5+1, who held bilateral meetings with the Iranians as well as internal coordination meetings.

Talks between the P5+1 and Iran were expected to continue until March 20. It’s unclear if the parties will then leave and reconvene next week, or possibly continue talking through the weekend. Among considerations, Iran’s Persian New Year holiday Nowruz begins March 21, and Kerry is due to meet Afghan President Ashraf Ghani at Camp David on March 23.

Iran analysts who met with Iranian negotiators in Lausanne on March 18 said the Iranians felt progress had been made, especially on technical issues, in recent days. But like their American counterparts, they described the negotiations as being something of an emotional roller coaster in terms of perceptions of how close or far a deal may be fluctuating throughout the hour or day.

The research and development issue is seemingly solvable, but the issue of UN Security Council sanctions is more difficult to find a compromise on, said Ali Vaez, senior Iran analyst at the International Crisis Group.

“There is no way we can limit research, because Iranian students have access to information, etc., but what the P5+1 appears to really care about is the development that could contribute to shortening the breakout time,” Vaez told Al-Monitor March 18.

“The most logical solution is to restrict development in the beginning, and then over time, as more trust is built, relax the restrictions on research and development, so that when the Iranians finally take over fueling their own reactors they would be able to do it with more modern and efficient centrifuges,” Vaez said.

Iran in particular resents the language in UN Security Council resolution 1929, adopted in 2010, that commands all nations to use any necessary means to uphold an arms embargo against Iran, in addition to pledging to try to halt any proliferation-related acquisition or activities, Iran analysts said.

Iranian President Hassan Rouhani wrote in his memoirs that one of his main achievements when he served as Iran’s nuclear negotiator from 2003-2005 was that he kept Iran’s nuclear file away from the UN Security Council, Iranian analyst and Al-Monitor columnist Mohammad Ali Shabani said. And Rouhani repeatedly warned about the dire consequences if the file was taken up by the Security Council.

Indeed, Rouhani, in the 2013 Iranian presidential campaign debates, chided his hard-line successor and presidential rival Saeed Jalili for having had Iran’s nuclear file referred to the UN Security Council under a Chapter VII resolution during his tenure as Iran’s nuclear negotiator.

“All of our problems stem from this — that we didn’t make the utmost effort to prevent the [nuclear] dossier from going to the UN Security Council,” Rouhani blasted Jalili at the June 7, 2013 debate. “It’s good to have [uranium enrichment] centrifuges running, providing people’s lives and sustenance are also spinning.”