US officials expect talks may have to resume next week to conclude a political accord on an Iran nuclear deal by the end of the month. 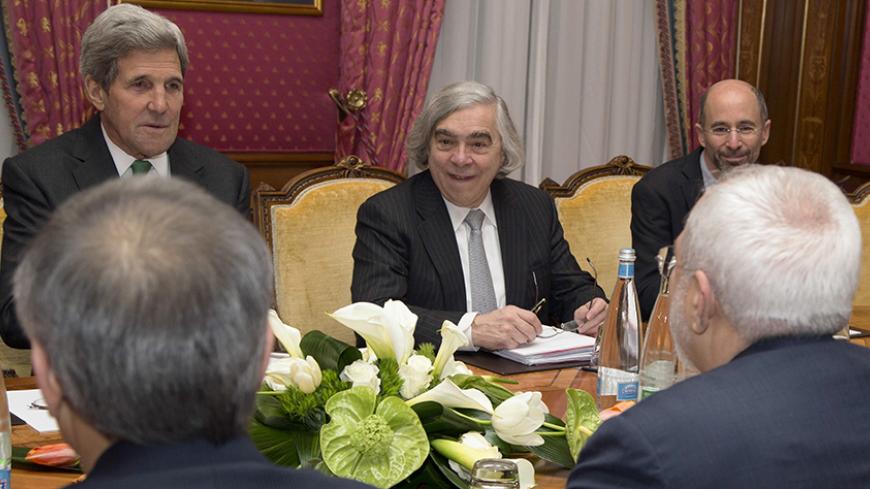 US Secretary of State John Kerry (L) and US Secretary of Energy Ernest Moniz (C) hold a meeting with Iran's Foreign Minister Mohammad Javad Zarif (front R, with his back to the camera) over Iran's nuclear program in Lausanne, March 17, 2015. - REUTERS/Brian Snyder

LAUSANNE, Switzerland — In a demonstration of what one US diplomat called “roller coaster” negotiations, there were signs March 17 that six world powers and Iran may need until the end of March to conclude a political agreement on major elements of a final Iran nuclear accord, after some hopes were raised March 16 that a deal might be possibly concluded by the weekend, when, among other things, the Persian New Year holiday begins.

Iranian officials said gaps on technical issues had narrowed to one major issue — thought to involve the scope of research and development that Iran could conduct under a final nuclear deal. However, a senior US official said March 17 that while technical talks between top Iran and US nuclear experts had been very productive, there was still a long way to go.

"The (technical) discussions … have been very, very professional and I think fruitful in terms of identifying the technical issues, clarifying and looking what our options are on the table for a potential agreement,” a senior US administration official at the talks, speaking not for attribution, told journalists here March 17.

"I am not going to get into specifics but we have definitely made progress in terms of identifying technical options for each major area,” the US official said. “And there is no way around it, we still have a ways to go."

“There is still one essential item remaining technically, that we will tackle this afternoon,” Ali Akbar Salehi, the head of the Atomic Energy Organization of Iran told Al-Monitor on March 17, ahead of a meeting with US Energy Secretary Ernest Moniz, Secretary of State John Kerry and Iranian Foreign Minister Mohammad Javad Zarif.

“We hope that we can reach common ground on this item,” Salehi said. “If we do, we can say that on technical issues, things are clear to both sides.”

The Salehi/Iranian delegation presented a proposal to US counterparts at that afternoon meeting on its ideas for how to resolve differences over a research and development related item in a final deal, a diplomat at the talks, speaking not for attribution, told Al-Monitor on March 17.

The US delegation was still analyzing and reviewing the proposal, the diplomat said.

Meanwhile, EU deputy negotiator Helga Schmid as well as technical experts and deputy negotiators from the other members of the P5+1 — the five permanent members of the UN Security Council plus Germany — arrived in Lausanne on March 17, and held internal consultations. Political directors from the P5+1 are expected to join the talks with the US and Iran here March 18.

US officials suggested March 17 that the talks here are likely to continue until March 20, and are likely to have to be resumed next week, in the run-up to the March 31 self-imposed deadline for a political agreement.

It is unclear whether Congress will hold off on the threat of moving forward with one of two new Iran sanctions bills Senate Democrats have vowed not to act on until at least March 24, given the seeming significant progress that has been made in the negotiations but the likelihood that more time will be needed to conclude the political accord.

“The goal is to have the framework laid down by the end of this month,” the senior US official said March 17. “And that’s the goal. I cannot predict whether we will get there or not.”