Diplomats from Iran and Russia projected optimism about a preliminary understanding while the UK and France said progress made but slow-going; US delays comment. 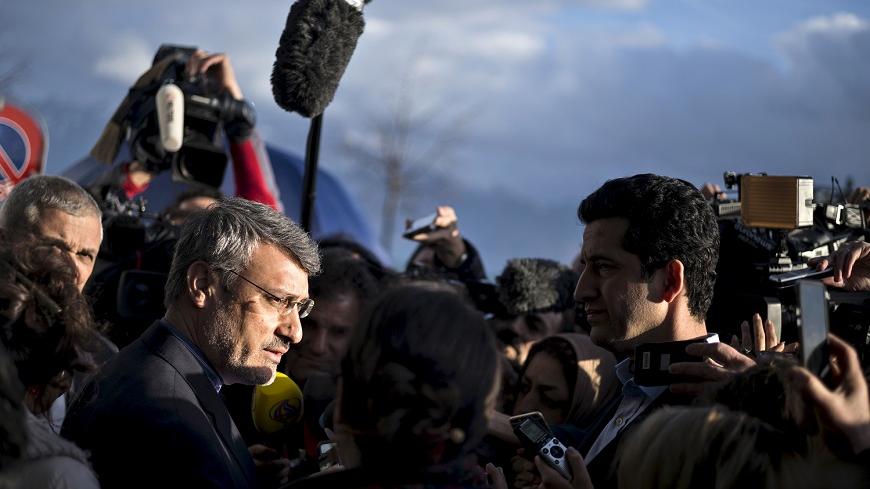 LAUSANNE, Switzerland — Iran and Russia’s foreign ministers said April 1 that political agreement on major elements of a final Iran nuclear accord might be announced here later in the day, and said that they hoped negotiators and experts would then move on to the work of drafting the detailed final Iran nuclear accord due at the end of June. But French and British envoys said while progress had been made, it was slow-going, and the United States so far withheld comment on whether it considered sufficient progress had been made.

“We have made significant progress over the last few days but it has been slow-going,” British Foreign Secretary Philip Hammond said April 1.

“We decided to break last night because some of the staff had been working through the previous night,” Hammond told the BBC here after talks resumed in the morning April 1. “I’m optimistic that we will make further progress this morning but it does mean the Iranians being willing to meet us where there are still issues to deal with. Fingers crossed and we’ll hope to get there during the course of the day.

“I think we have a broad framework of understanding but there are still some key issues that have to be worked through,” Hammond added. “Some of them are quite detailed and technical so there is still quite a lot of work to do, but we are on it now and we’ll keep going at it.”

Iranian Foreign Minister Mohammad Javad Zarif, speaking after marathon talks that went into the middle of the night April 1, similarly said that the teams were taking a break for the night and would resume consultations in the morning.

"We have accomplished quite a bit but people needed to get some rest and start over early in the morning,” Zarif told reporters around 1 a.m. April 1. “I hope that we can finalize the work on Wednesday and hopefully start the process of drafting.”

Zarif, speaking to Al-Monitor at breakfast April 1, said when he referred to starting the drafting process, he was referring to the detailed final Iran nuclear deal, the Joint Comprehensive Plan of Action, which is due to be completed by the end of June.

The White House said President Barack Obama had convened a video conference with the US negotiating team in Lausanne and his national security cabinet March 31 to get updated on the talks, but did not indicate what the assessment was from the consultations.

US Secretary of State John Kerry stayed on for further consultations with the P5+1 Wednesday, as did the German, British and Iranian foreign ministers, as well as European Union foreign policy chief Federica Mogherini. The Chinese, French and Russian foreign ministers departed Lausanne, citing various obligations.

"We can quite certainly say that on all the key aspects of final settlement of this problem, the ministers have reached principal consent that will be — hopefully in the next hours, maybe a day — put on the paper,” Russian Foreign Minister Sergey Lavrov told reporters after 1 a.m. April 1, according to Sputnik News.

"It will not mean the end of the work,” Lavrov continued. “It will mean that we have fulfilled the obligations we undertook in November — to form a political framework of all political aspects of the problem — and then, by the end of June as we agreed, the experts will be working on technical details … because, as you know, the devil is in detail.”

France’s Foreign Minister Laurent Fabius, before departing the talks for a cabinet meeting late March 31, said it was slow-going.

The White House has so far held back from commenting on how it assessed the progress reached here, and if it would favor a formal announcement of reaching a preliminary understanding on major elements of a final deal. It was still unclear when Kerry might depart the talks, or if they might continue into April 2.

“Tonight, the president convened a secure video teleconference with members of his national security team to discuss the P5+1 negotiations with Iran,” Bernadette Meehan, spokesperson for the US National Security Council, said March 31, referring to the five permanent UN Security Council members plus Germany.

“The president received an update on the current status of the negotiations from Secretaries Kerry and Moniz and other members of the negotiating team in Lausanne, Switzerland, and thanked the team for their continuing efforts,” Meehan said.

Western diplomats here previously said there was more or less agreement on the first 10 years of a final deal. But they indicated April 1 there were disagreements on the language involving years 11 to 15 of a final deal, including on the research and development that Iran could conduct.

If we reach solutions on remaining issues, we are working on a press statement that would be released jointly by Iran and the P5+1, Iranian Deputy Foreign Minister Abbas Araghchi told Iran state television Channel One in an interview April 1. We have started drafting and we have working documents, but they will not be publicly released at this time.

The remaining issues to finalize a political understanding are not necessarily the hardest ones, Aaraghchi said, adding the delegations will leave as soon as they finish. "We have no wish to stay longer in Lausanne, as we spent all Nowruz [Persian New Year] holidays here working," Araghchi said.