After all-night talks between US Secretary of State John Kerry and Iranian Foreign Minister Mohammad Javad Zarif a preliminary agreement on a nuclear deal with Iran is still not finalized. 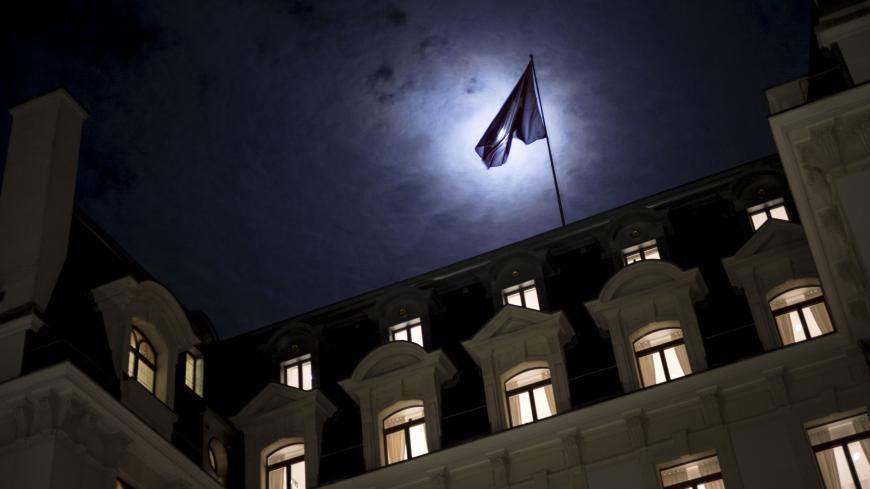 A late night view of the Beau Rivage Palace Hotel during an extended round of Iran nuclear talks in Lausanne, April 1, 2015. Major powers and Iran negotiated into the early hours of April 2 on Tehran's nuclear program, two days past the deadline. - REUTERS/Brendan Smialowski

Lausanne, Switzerland — US Secretary of State John Kerry and Iranian Foreign Minister Mohammad Javad Zarif held marathon negotiations through the night that ended after 6 a.m. on the morning of April 2, as they tried to overcome final gaps for a political accord on an Iran nuclear deal. But Iran said the issues had not been totally resolved and what was likely to be issued later today or on April 3 is a press statement.

"We have examined all the solutions, which should provide the axis of a final accord between now and the end of June,” Zarif told Iranian journalists here on the morning of April 2. “The P5+1 [the five permanent UN Security Council members plus Germany] is studying them."

Zarif added, "There will be a statement to the press that should be announced but the text still has to be worked on."

Negotiators and ministers from the six world powers that comprise the P5+1 held a meeting among themselves after breakfast April 2, ahead of a meeting between Zarif and European Union foreign policy chief Federica Mogherini.

Zarif, speaking ahead of those meetings, said the members of the P5+1 “have to examine among themselves the results of the negotiations” that were held overnight between him, Kerry and EU deputy negotiator Helga Schmid. “We don't know yet the result of those discussions. … If these solutions are approved, it is expected that there will be a joint declaration made by me and Mrs. Mogherini and then we will start drawing up the text of a final agreement by the end of June.”

The White House said on April 1 that progress was being made at the talks here, but that as of yet there had not been sufficient movement from Iran on some issues to finalize the preliminary political agreement.

“The talks continue to be productive and progress is being made,” White House spokesman Josh Earnest told journalists at the White House press briefing on April 1. “While the talks have been productive, we have not yet received the specific tangible commitment that the international community seeks,” he said.

“As long as we are in a position of convening serious talks that are making progress, … we would not arbitrarily or abruptly end them,” he added. “This is a very complicated situation and we want to be sure that … we're clear about the details. The details in the situation matter significantly.”

German Foreign Minister Frank-Walter Steinmeier, announcing he was staying overnight in Lausanne on April 1 to continue the negotiations, said the onus was on Iran to offer ideas to close remaining gaps for an accord.

“Tonight there will be new proposals, new recommendations. I can’t predict whether that will be sufficient to enable an agreement to be reached,” Steinmeier, speaking in German, said according to a translation from Reuters. “I will remain here tonight and then tomorrow morning we will see how the situation develops.”

US and Iranian officials said the situation was still fluid, and they were not sure if the talks would end later on April 2 or possibly continue into April 3.