Iranian nuclear talks go on even if 'clock strikes midnight'

US Secretary of State John Kerry said Iran nuclear deal must withstand the test of time and "we will not be rushed" as negotiations continue past a US congressional deadline. 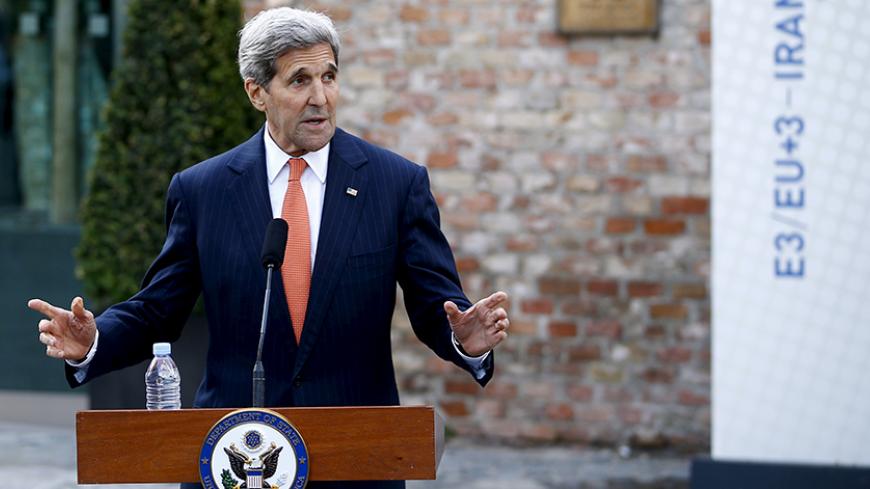 US Secretary of State John Kerry talks to journalists in front of Coburg Palace, where the Iran nuclear talks are being held in Vienna, July 9, 2015. - REUTERS/Leonhard Foeger

VIENNA — US Secretary of State John Kerry said an Iran nuclear deal would require more work to be able to withstand the test of time, as negotiators from Iran and six world powers blew through a July 10 congressional deadline after which they would have to submit a prospective deal for a 60-day congressional review.

“We will not be rushed,” Kerry told journalists July 9 outside Vienna's Coburg Palace hotel, where Kerry had held intense negotiations with members of the P5+1 (the five permanent UN Security Council members plus Germany) as well as one-on-one talks with the Iranian foreign minister.

“All we are focused on is the quality of the agreement,” Kerry said. “It has to be able to withstand the test of time.”

Outside and perhaps inside the negotiating rooms, expectations that a deal might possibly be imminent had fluctuated throughout the last day, and a sense of some bitterness and disappointment was evident after the delay was announced. Furthermore, Iranian officials alleged that the US negotiating team had withdrawn its own proposal on July 8, seemingly after consultations with the White House, Iranian officials and sources close to the talks told Al-Monitor on July 9.

“We have seen certain changes in positions, particularly since last night,” a senior Iranian negotiator, speaking not for attribution, told journalists July 9.

“On a lot of issues they have been changing positions,” the Iranian official said, referring to the United States, declining to elaborate further. “Ask them.”

Since reaching a framework accord in Lausanne, Switzerland, on April 2, the Iranian official said increasingly in the endgame talks it was like negotiating with six different countries in parallel rather than with a united P5+1 group.

“People have decided to walk back on some of the elements of Lausanne,” the Iranian negotiator said. “And there have been both changes of position as well as multiple positions.”

Iranian officials interpreted the shifting US position as perhaps related to the White House deciding it would suit the job of selling the deal at home and to Congress if they took some more time.

In a sign that may please some members of Congress, Sen. Bob Corker, R-Tenn., the chairman of the Senate Foreign Relations Committee, told CNN that there had been a breakthrough in the talks and agreement is within reach, but it would not be finalized today, CNN reported July 9.

President Barack Obama and his national security team on July 8 held a secure video conference with Kerry, US Energy Secretary Ernest Moniz and members of the US negotiating team in Vienna to review progress in the negotiations, the White House said. “The president reviewed the progress of negotiations to date, and provided guidance related to our ongoing efforts to achieve a good deal between the P5+1 and Iran that meets our requirements,” the White House said in a statement.

Iran Foreign Minister Mohammad Javad Zarif, for his part, said he too would not be rushed.

“We're working hard, but not rushed, to get the job done,” Zarif wrote on Twitter July 9 as Kerry was speaking to the media. “Mark my words; you can't change horses in the middle of a stream. “

There has been good progress, but there are still some difficult points, Fabius told journalists outside the Coburg. Comparing the Iran nuclear negotiations to a marathon, he said the talks were nearing the end, “and the last 100 meters are the most difficult.”

He said he would be staying the night, and negotiators would continue working and see where they were in the morning.