Rouhani thanks Khamenei for nuke deal 'stamp of approval'

In a letter, President Hassan Rouhani says the supreme leader's letter provided a "stamp of approval" for the nuclear deal, though others believe Supreme Leader Ayatollah Ali Khamenei's "conditions" provide the antidote to a bad deal. 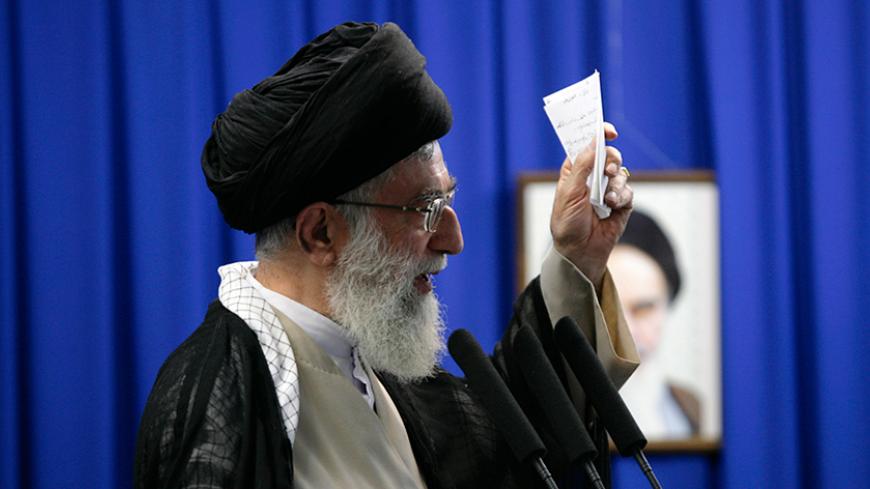 In a letter published on the president's website, Iranian President Hassan Rouhani has thanked Supreme Leader Ayatollah Ali Khamenei for approving the nuclear deal between Iran and five permanent members of the UN Security Council. Rouhani’s letter seemed to downplay Khamenei’s “conditional approval” of the nuclear deal Oct. 21, and focused more on using the "win-win" strategy for future prospects of cooperation between Iran and other countries.

Rouhani’s Oct. 22 letter said that Khamenei’s “stamp of approval for the results of the administration and the negotiators … will start a new chapter toward excellence for the Islamic Republic of Iran.” The letter added, “The oppressive international economic, trade, and financial sanctions or the unilateral sanctions by the [UN] Security Council, European Union, and America against the Islamic Republic of Iran, have been eliminated.”

In the letter, Rouhani optimistically said that as a result of the nuclear deal, Iran’s “role as a primary provider of stability and security in the region” has been set. The letter also stated that the “Zionist project” to demonize Iran has failed for the first time in decades.

Rouhani also praised what he called unprecedented accomplishments in international agreements, such as, “for the first time in the history of the United Nations, [nuclear] enrichment by a non-permanent member was directly accepted by the UNSC.” He also wrote that for the first time, “six binding resolutions of the Security Council … have been suspended at once through negotiations and the ‘win-win’ approach of the JCPOA has become a model of resolving peacefully complex world problems.”

Newspapers supportive of the nuclear deal downplayed Khamenei’s conditions while those critical focused on his warnings about the United States and his doubts about the deal. In his conditional approval, Khamenei’s website published a letter by the supreme leader addressed to Rouhani.

The Oct. 22 top story in an Iranian newspaper, which operates under the administration, was headlined, “The leader’s command to implement barjam [JCPOA].” However, on the opposite end of the political spectrum, Kayhan newspaper’s top story was headlined with a historical and religiously themed “The child of Ashoura thwarted America’s plan.” Ashoura is the 10th day of Moharram, when Shiites commemorate the resistance of Imam Hussein, the third Shiite Imam, against tyranny. This is in response to Khamenei’s points in his letter that despite President Barack Obama’s two letters to him that the United States was not after regime change in Iran, Obama quickly proved otherwise and “lifted the curtain on the true intentions of US leaders” by supporting the 2009 post-election protests and by threatening Iran with military attacks. Khamenei wrote that “it was unlikely that [the US] will ever act in any other way” toward Iran.

The top story in hard-line Vatan-e Emrooz was simply headlined “Antidote.” Many hard-liners had previously wanted to offer amendments and stipulations to the nuclear deal, though they were prevented from doing so by parliament speaker Ali Larijani. This headline suggests Khamenei’s letter and conditions will provide the “antidote” to what they view as a bad nuclear deal.

Khamenei’s website published the letter Khamenei wrote to Rouhani about the nuclear deal, titled “Conditional Approval.” In his letter, Khamenei stated a number of conditions that would make the final nuclear deal void. Khamenei wanted written statements by Obama and the European Union guaranteeing that sanctions would be removed. The letter also stated any new sanctions, whether terrorism or human rights related, would be considered a violation of the JCPOA. He also wrote that the International Atomic Energy Agency must close the file on present and past cases of possible military dimensions of the nuclear program.