President Hassan Rouhani warns that opportunities arising from the nuclear deal won't last forever and Iran must take advantage of them and engage with the world. 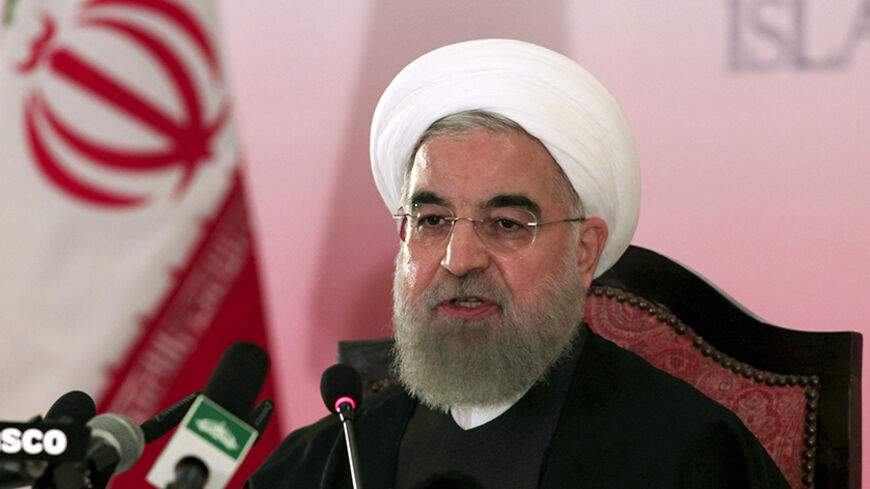 After facing weeks of criticism over the lack of tangible economic results from Iran's nuclear deal with six world powers, President Hassan Rouhani is undeterred. At an April 7 ceremony on nuclear technology, Rouhani praised the nuclear deal and warned, “The opportunity that the comprehensive nuclear deal brought about for us is not permanent and everlasting.”

He continued, “Just as the clouds over our heads will not remain forever and will pass, all the opportunities are the same.” Referring to the nuclear deal — the Joint Comprehensive Plan of Action — by its Persian acronym, Barjam, Rouhani said, “The Barjam is a great opportunity for the nation in acquiring technology, for economic issues and in cooperating with the world and attracting investment.” Addressing domestic opponents of the administration, Rouhani said, “If, God forbid, a limited number of people were successful and did not allow us to make use of these opportunities, these opportunities will not come back.”

Rouhani has been touting the idea of more Barjams, essentially large and comprehensive domestic agreements to address fundamental changes in the country. Many officials have answered back that the benefits of the first agreement, the nuclear deal, have failed to materialize and therefore talks of more agreements are premature.

During an April 6 speech, Supreme Leader Ayatollah Ali Khamenei appeared to be attempting to lessen the pressure on the administration in pursuing economic reforms by implementing the "resistance economy."

“Our expectations are not very high,” said Khamenei. “I know that obstacles, difficulties and shortages of funds are some of our problems.” He added that these problems must be overcome and that officials must look for areas where they can save money, and use those funds for more worthwhile projects.

Citing his own time as president in the 1980s, Khamenei offered sympathy regarding Rouhani’s workload, saying, “From various perspectives, the management of the country is not an easy task; it is very difficult.” In a surprising endorsement that caught even the attention of London-based BBC Persian, Khamenei said that Vice President Eshag Jahangiri could help implement the resistance economy, given the president’s numerous engagements. It is not clear why Khamenei personally highlighted Jahangiri; it perhaps was because he was the highest-ranking official from the administration to attend the speech.

Despite Khamenei’s attempt to strike a positive and supportive tone, hard-line media were relentless in their criticism in April 7 papers.

In a column in Kayhan newspaper, Jaffar Bolouri wrote that since the negotiations between Iran and six world powers, Iran has faced “nearly unprecedented” regional attacks in “Yemen, a dirty oil conspiracy, the mass murder of 500 Iranian pilgrims in God’s house [the hajj stampede], the execution of Ayatollah [Nimr al-Nimr and] the Shiite leaders in Saudi Arabia, and the mass murder of Shiites in Nigeria and their leaders.” Bolouri said that while some people dismiss all that as incidental to Rouhani’s presidency and the nuclear talks, he believes it is part of a concerted plan by Western governments and regional allies to increase pressure on Iran after the nuclear deal.

On the possibility of improving ties with the United States now, Bolouri wrote, “Not only did America’s anti-Iranian position not decrease one bit after the nuclear deal, it also has increased.” On the post-nuclear-deal sanctions relief and the remaining US sanctions, which prohibit countries from using US dollars in transactions with Iran, Bolouri wrote, “The sanctions have only been removed or suspended on paper, because America in actuality has not given European countries permission to work with Iran.” An article in hard-line Vatan-e Emrooz titled “The Dollar Lie” also criticized administration officials over this issue.

Though Khamenei selected the editor of Kayhan, Hossein Shariatmadari, it would be a stretch to say Kayhan editorials and columns represent Khamenei’s policy positions. However, Kayhan is an important source for right-wing positions and talking points.