Why Saudi Arabia needs to trust its man on Iran

Considered an Iran expert in Saudi foreign policy circles, Minister Adel al-Turaifi has the background to help mend ties with Tehran; yet, he has so far been either unable or unwilling to resist pressure to take steps to achieve the exact opposite. 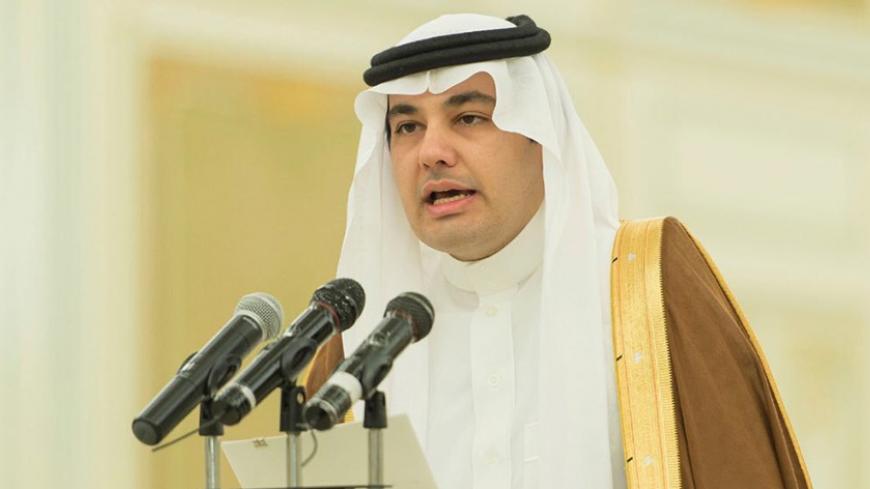 When King Abdullah died in January, Saudi Arabia’s global image was worrisome. Some analysts considered the kingdom responsible for the sudden rise of the Islamic State, Riyadh supported Abdel Fattah al-Sisi’s 2013 coup against then-President Mohammed Morsi’s government in Egypt, and the Saudi army had been used to contain the 2011 popular uprising in Bahrain — just to mention a few controversies.

The country urgently needed to rebuild its image. When new King Salman bin Abdul-Aziz Al Saud reshuffled the Saudi Cabinet in January, appointing Adel al-Turaifi as minister of culture and information, the move was interpreted as a predictable response to the aforementioned circumstances and as a change in the kingdom's cultural policies. This was particularly the case as Turaifi was described as young, liberal and a technocrat journalist. Indeed, Turaifi started his journalism career writing for Saudi newspaper Al Watan from 2002 to 2005 and then for Al Riyadh. He became editor-in-chief of London-based Majallah magazine in 2010, and then held the same position at Al-Sharq Al-Awsat in 2013. In November 2014, he was appointed general manager of the Saudi-funded Al Arabiya news channel.

Turaifi was a smart choice for the Ministry of Culture and Information since he was experienced with both Arab and Western media. However, what made him unique, compared with other candidates, was his long media and academic experience related to Iran. Indeed, there is mounting evidence that Turaifi is an important figure in shaping Saudi policy toward Iran.

His interest in Iran dates back to the 2000s, when as an Al Riyadh columnist, he wrote several pieces focusing on Iranian domestic politics. Moreover, he has been responsible for almost all Saudi-financed Persian media outlets that have been launched in the past five years. He set up the Persian website of Majallah in 2010, and when he moved on to Al-Sharq Al-Awsat, he took along his Persian team and started a Persian version of the media outlet. Since his appointment as minister, he has continued to focus on Persian-language media. For instance, he began a 24/7 TV channel in Persian specifically for the annual hajj season. On Dec. 10, he started the Persian website Al Ekhbariyya. A new, Saudi-financed, Persian-language satellite TV station is slated to be launched soon.

Turaifi has also displayed an academic interest in Iran. He wrote his doctoral dissertation on the Saudi-Iran relationship from 1997 to 2005, for which he interviewed influential Saudi politicians including Foreign Minister Adel al-Jubeir and Prince Turki Al-Faisal. Indeed, Turaifi is known as the only incumbent member of the Saudi Cabinet with broad academic knowledge of Iran and connections with some Iranians abroad, as well as extensive involvement in Saudi Arabia’s Persian-language media initiatives.

He has emphasized his plans to intensify his country’s use of Persian-language media, and did so again Dec. 10 when he told National Public Radio, “It's better if Iranians know how we live; it's kind of a dialogue between people."

There are some clues that Turaifi is indeed a liberal-minded academic. For instance, he is a close friend of Mansour al-Nogaidan, a Saudi ex-fundamentalist who now embraces a liberal interpretation of Islam. There are suggestions that the two friends have undergone the same transformation. In a 2004 interview with New York Times Magazine, Turaifi bluntly said, “We must be honest. Wahhabism was a creator of violence since the beginning of its history.”

But just how instrumental are Turaifi’s personal inclinations in deciding his career in government? Not very, as far as Saudi Arabia’s religious establishment is concerned. Wahhabist scholars’ grip on different parts of the power structure in Saudi Arabia, and their insistence on anti-Shiite propaganda, are too strong to be shaken by Turaifi. Indeed, his predecessor Abdulaziz bin Mohieddin Khoja apparently lost his job because of his indifference to the Saudi religious establishment when he closed down the extremist Vesal TV in the aftermath of terrorist attacks targeting a Shiite religious ceremony in al-Ahsa in November 2014. Vesal TV, which was notorious for disseminating anti-Shiite propaganda, resumed its broadcasts only a few days after Khoja was fired — or resigned, as per some reports. In a letter to Abdullah, Khoja warned about the increasing domination of the Saudi religious establishment within the kingdom and its interference in government affairs. Khoja was also particularly concerned about the trajectory of Saudi relations with Iran, urging the king to resume direct negotiations with Tehran, since Iran “is a neighboring country with undeniable influence that is impossible to neglect.”

Unlike his predecessor, however, Turaifi appears more aware of the sensitivities of the Saudi religious establishment, as well as the current anti-Iran atmosphere in his country. Turaifi was accompanied by Mohammad Ansari, director of Vesal TV’s Persian-language channel, at the launch ceremony of that channel for Iranian hajj pilgrims in September. This attests to Turaifi's limited room for maneuvering when it comes to sensitive issues such as Wahhabist propaganda and matters related to Iran. The step was no doubt an inappropriate response to recent measures taken by the Iranians, who in January closed down the offices of 17 satellite TV channels for inciting anti-Sunni sentiment.

In his search for the causes behind the decline of the Iran-Saudi rapprochement of 1997-2005, Turaifi identifies three obstacles in his dissertation: “deep religious differences, a cultural gap between the two societies and the unresolved issue of regional security.” Through his role as a Cabinet member and an expert on Iran, Turaifi could have a positive impact on all of these problems. Yet, the reality is that the new projects initiated by the Saudi Ministry of Culture and Information are widening the cultural gap and intensifying religious differences between Iranians and Saudis — precisely what Turaifi identified as obstacles to rapprochement. Whether this trajectory is temporary or a permanent fixture of the ministry remains to be seen. What is clear is that Saudi Arabia, and Iran, would certainly benefit by taking advantage of Turaifi's expertise and experience.