Although the Arab peace initiative may be going nowhere, there may be a Saudi-Israeli convergence of interests on the threat from Iran. 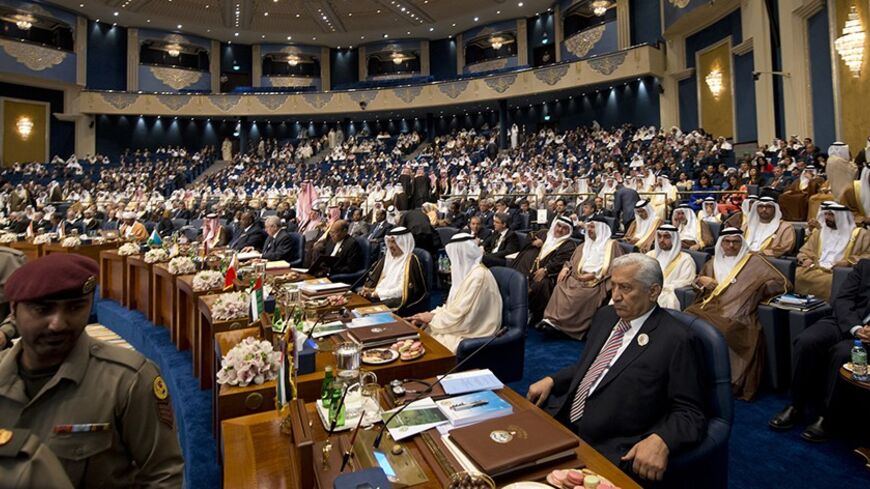 Due to their sensitivity, Saudi contacts with Israel have historically been conducted behind closed doors. When they become public knowledge, they are bound to generate sensational stories in the kingdom. In the past, such contacts used to be denounced by almost all Saudis, but not anymore.

Earlier this spring, al-Madarik, a Saudi publisher run by journalist Turki al-Dakhil, translated a book by Israeli academic Joshua Teitelbaum titled “Saudi Arabia and the New Strategic Landscape.” Opponents regarded the translation as a gradual normalization with the Zionists that comes at a time when several European and American forums called for boycotting Israeli academic research. Other Saudis justified the translation on the grounds that it was better to “know thine enemy” than remain in the dark. Such overtures into Israeli intellectual productions and opinions have become regular, as Saudi newspapers such as al-Sharq al-Awsat and Qatari Al Jazeera television regularly include Israeli personalities among their commentators.

Yet, the heated debate over the book translation quickly evaporated in favor of another, more sensational story. On May 26, the former Saudi intelligence director and former ambassador in London and Washington, Prince Turki al-Faisal al-Saud, appeared with the former head of Israeli military intelligence, Amos Yadlin, in a public debate organized in Brussels by the German Marshall Fund of the United States. Most Saudi media reported the event in passing, but divided Saudi opinions were expressed on social media. Many Saudis tweeted links to the debate, adding their varied commentaries. There were those who praised the clarity and sharpness of the prince, commending him for explaining the Saudi position on the Palestinian-Israeli conflict to a Western audience, while others condemned him as the architect of normalization and Saudi close relations with Israel.

It was not the first time the prince met Israeli officials; such meetings have taken place in academic and think-tank forums in Europe and the United States. By now, the meetings have a well-known formula. The Saudi side, represented by Turki, resurrects King Abdullah bin Abdulaziz’s 2002 Arab Peace Initiative, according to which Arabs recognize the State of Israel in return for Israeli withdrawal from the 1967 Israeli-occupied territories, including East Jerusalem, and a just solution to the Palestinian refugee problem. The Israeli side usually meanders and explains the obstacles to implementing such an initiative.

This time, Yadlin rejected the Saudi and Arab position that insists on a “take it or leave it” approach, preferring step-by-step negotiations. He argued that most Israelis are not aware of this initiative, to which Turki replied that it is the responsibility of the Israeli leadership to raise its people’s awareness of the prospect for a permanent peace with the Arabs under the umbrella of the Arab Peace Initiative.

After such unproductive encounters, Israelis invite the prince to visit Jerusalem and convey Prime Minister Benjamin Netanyahu’s willingness to turn up in Mecca.

The Saudis, including Turki, are still under the illusion that the Arab Peace Initiative might still be well-placed on the table for negotiations. There have been some recent efforts, including by pro-peace Israelis, as presented here in Al-Monitor, to keep the initiative alive. The initiative is, however, by now a dead solution and has been so for a long time. Israel is under no pressure to withdraw from any territories and is determined to indefinitely keep Jerusalem as its capital. Sacred places are often hard to divide, given that each side claims that it holds a God-given mandate over the sanctuary.

Moreover, Israel has no appetite for dealing with Palestinian refugees who have been displaced so many times since 1967. In Jordan, Lebanon, Iraq and most recently Syria, Palestinian refugees have paid a high price for Israeli occupation of their territories and Arab regimes and nonstate actors’ violence against them. From Tall al-Zaatar, Sabra and Shatilla and Yarmouk, the memory of exile and displacement of the first generation is mixed with the experience of massacres inflicted on the second or third generation by fellow Arabs. The Palestinian exodus and subsequent massacres will remain alive regardless of whether Israel shows any kind of interest in reaching a humane and just solution to this disaster. It will no doubt haunt those Israelis whose conscience is still alive and resistant to the propaganda of their hawkish leadership. But whether this Israeli minority is to be counted on remains to be seen, as signs suggest that it has become insignificant and marginalized in Israeli politics.

Turki can tour think tanks and meet with former Israeli intelligence officials but the reality on the ground militates against Israel's accepting the Saudi initiative and granting its architect, Abdullah, the honor of being remembered for ending the six-decade Israeli-Palestinian conflict. Today, Arabs cannot threaten Israel militarily, given that the three big armies in the region are preoccupied with domestic troubles. The Egyptian army is busy with crowning its general as an elected president, the Iraqi army is fighting sectarian battles against the Sunni population and the Syrian army is equally preoccupied with reclaiming territories from various rebels.

There are nonstate actors such as Hezbollah of Lebanon that continue to pose a threat to Israel if the latter ventures into its strong base in south Lebanon. But as long as Hezbollah is busy on the Syrian front, the danger is somehow remote at the moment. Moreover, Israel does not face a threat from jihadist groups, despite the rhetoric and alarmist propaganda of both the Israeli and al-Qaeda-affiliated organizations. Most noise coming from these groups is more focused on eradicating the Shiites and other sects wherever they are encountered. It will take a long time before they turn their attention to the Jews, if ever they do so.

If Israel accepts the Arab Peace Initiative, it may not be guaranteed peace, for such nonstate actors do not feel compelled to abide by its terms even if they are now busy with other conflicts. Therefore, Israel does not seem to have an incentive for reaching a peace that may not alter real threats on the ground.

Despite US involvement in reviving Israeli-Palestinian peace talks with the initiative of US Secretary of State John Kerry, neither the Israelis nor the Palestinians, not to mention the Arabs, are truly excited about the prospect of a realistic and imminent solution. Israel is content with the status quo in which no solution is the solution.

The Arab Peace Initiative, a breakthrough when it was announced 12 years ago, must be added to the list of Saudi foreign policy failures, at least for now. Perhaps there is a faint pulse, and new leadership in the kingdom, Israel and the region might someday resurrect it in one form or another.

In the meantime, the new priority is Iran, and keeping the heat on with continuous alarmist propaganda about the Iranian threat, which has replaced Israel as the enemy of choice.

This policy had at its disposal a media empire that pumped out anti-Iranian propaganda, which it might have to reverse after Saudi Foreign Minister Prince Saud al-Faisal invited his Iranian counterpart, Mohammad Javad Zarif, to visit Riyadh.

Like their neighbors in the Gulf, the Saudis are truly out of the conflict with Israel, although there may be longer-term security and economic interests in building ties.

The prospect of Saudi-Israeli ties at first may seem a stretch, but the Saudi leadership may not be so concerned with domestic public opinion and not fear a backlash from their conservative Salafist backers.

The latter will no doubt draw on the Prophet Muhammad’s tradition to justify close ties with Israel, thus casting an Islamic legitimacy on Saudi foreign policy as they always do. There is an Islamic tradition upon which to make the case, when the time comes.

After all, many Salafists remember that the Jews of Medina hosted Muhammad when he fled pagan Mecca. In the 1990s, then-Grand Mufti Abdul Aziz Ibn Baz issued a fatwa about the permissibility of (sulh) peace with the Israelis, citing various aspects of the prophetic tradition. The Saudi mufti died in 1999.

The trend will develop gradually, of course, as the kingdom cannot get too far ahead of the Palestinian case, which still may have the potential to surprise. The evolution of price-tag killings in the West Bank, Israeli strikes on Gaza and provocation by Israeli settlers and others at the Dome of the Rock could spark another wave of violence and reaction among Saudi, Arab and Muslim communities worldwide.

Turki may be the most willing member of the Saudi royal family to engage in open dialogue with Israeli officials, simply because he can always claim that he does not hold an official post in government or represent his country’s foreign policy. But we all know that the line between the private and the public is always blurred in an opaque country such as the kingdom. The prince will no doubt continue to play a key role in developing ties with Israeli officials, which may be needed not for peace but for war, especially if Saudi-Iranian relations unexpectedly deteriorate further in the future.