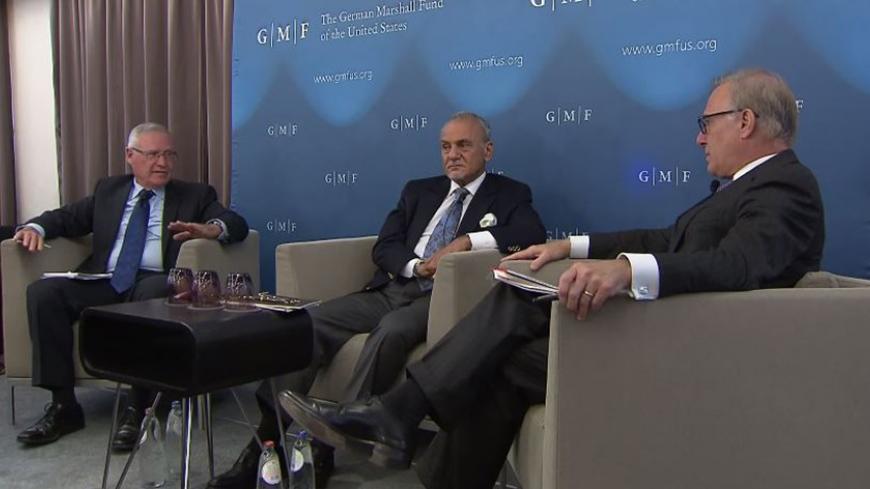 A public meeting between a senior member of the Saudi monarchy and a retired Israeli general is a rare story, as Saudi Arabia does not maintain diplomatic relations with Israel. That is why I waited with great interest for the live online broadcast from Brussels of the May 26 encounter between Prince Turki al-Faisal al-Saud and Maj. Gen. (res.) Amos Yadlin. Prince Turki has served as the Saudi minister of intelligence and as his country’s ambassador in Washington and London. He now heads the King Faisal Center for Research. Yadlin is the Israel Defense Forces' former director of military intelligence and today heads the Institute for National Strategic Studies (INSS). The meeting, hosted by the German Marshall Fund of the United States, was moderated by senior Washington Post columnist David Ignatius.

More than five years ago, I had an opportunity to closely monitor the positions of Prince Turki regarding the Israeli-Arab conflict. We met at a conference on the Arab League’s peace initiative, initiated by the Oxford Research Group. The conference was also attended by Nabil Fahmy, Egypt’s current foreign minister; Hesham Youssef, then-chef de cabinet of the secretary-general of the Arab League; and, representatives from the Palestinian Authority, Jordan, the United States, Europe and Israel. The message Prince Turki sought to convey this week was essentially no different from what he said in October 2008 at the Oxford conference: The Arab and Muslim world is offering Israel a peace initiative, the seeds of which were planted in Saudi Arabia and sprouted in Beirut on March 28, 2002.

The true, sad story of the initiative is clear in the messages of the Israeli speaker.

At the 2008 conference, Turki stressed that instead of a bilateral arrangement with the Palestinians, Israel could reach one with the Arab League that would not only end the conflict and the occupation, but also normalize relations with all the Arab states and members of the Organization of Islamic Cooperation. He spoke in a similar vein this time, saying, “Since the establishment of Israel in 1947, this is what Israelis have always told the rest of the world: ‘If only the Arabs would agree to sit with us and talk about peace.' That is all we want. … The Arabs have crossed the Rubicon. They don't want to fight Israel any more.” He added, “[Israel] has atomic weapons. We all know that. It has means to deliver these weapons … in the air force, and perhaps even a missile delivery system. The Israeli navy has submarines that can launch these missiles. So the Arabs are not crazy. Instead of waging war, the Arabs are waging peace.”

The Saudi official estimated that 65% of Israelis and Palestinians would accept the Arab League’s proposal. “But where is [Israeli Prime Minister Benjamin] Netanyahu on this? Where is [Foreign Minister Avigdor] Liberman on this?” he kept asking. “These are the people who are deciding what the Israeli people will face from now on.” He disputed the oft-heard argument raised by Yadlin that the Arab Peace Initiative was a dictate that must be accepted as a whole, making clear that the conflict’s core issues — Jerusalem, borders and refugees — would be resolved by negotiations and in agreement by both sides. Turki threw down the glove to Israel: “There is a proposal on the table. Tell us, 'We accept this proposal but we want to change it.' And sit down with us and talk about what those changes are.”

During the discussion, Yadlin positively addressed the Saudi initiative, which preceded the resolution of the Arab League. He argued that the civil war in Syria, which prompted its removal from the Arab League, actually removes the Golan Heights from the Arab League equation of "Lands for Peace." Yadlin hinted that the Arabs are to blame for the ignorance of the Israeli public concerning their initiatives, saying, "My suggestion is that his highness comes to Jerusalem and prays at the mosques, which are for all practical purpose controlled by the Muslim leadership of Jordan and Palestine. Then, it's a very short drive to the Knesset. He will speak to the Israeli people.” One can assume that the former intelligence head knows that a representative of the Saudi royal family will not come to pray in East Jerusalem while Israel keeps settling Jews there and refuses to discuss its future.

“But emotional issues like me going to Jerusalem to pray, before the leaders of Israel explain to the Israeli people what the Arab Peace Initiative is? I think that's putting the chicken before the egg."

"You have to negotiate with good heart and with genuine commitment. Not to use emotions as a means of influencing or attempting to divert attention from important issues, … to put me as a stumbling block or as a key to a door in this. Who am I to do that? It is for the Israeli leadership to explain to their people what the Arab Peace Initiative is. They read it. There are [those] better qualified to go to their people and say: 'Listen, this is a good proposal. Let's take it up.'”

Turki encouraged Israel to turn to the Palestinians, saying, “Talk to the people whose land you occupy, talk to the people whose land you steal, … not to Saudi Arabia. Saudi Arabia will fully support whatever agreement the Palestinians reach with the Israelis.” The prince said, “If the Arab initiative is accepted, I can take a plane from Riyadh to Jerusalem and visit the holy sites.” By so doing, he said, he would be fulfilling his late father’s wish to pray at Al-Aqsa Mosque.

Yadlin was not to be deterred. “President [Anwar] Sadat put the egg before the chicken," he countered. “He totally changed the mood in Israel." But he did not leave it there in the distant past and in the comparison to the Egyptian peace initiative that ended in Israeli withdrawal from all of the Sinai, down to the last centimeter. Yadlin praised the June 2009 Bar-Ilan speech in which Netanyahu declared his support for a two-state solution — support that was never put to a test at the cabinet table. He even said, “Netanyahu is willing to come to Mecca and to Jeddah,” a proposal as realistic as the invitation to the Saudi prince to address the Knesset.

According to Yadlin, the main stumbling block on the road to a permanent arrangement is not Israel’s refusal to discuss the Arab Peace Initiative, but a lack of trust between Israel and the Palestinians. Yadlin hinted that he expected Saudi Arabia and the other Arab states to back his proposal for a unilateral withdrawal, including the evacuation of isolated West Bank settlements, along the lines of the Israeli withdrawal from Gaza. He promised that his proposal “will not close the door to the Arab Peace Initiative in the future,” and directed the prince to the INSS website to read the details.

It turns out that the prince had already perused Yadlin’s document. “[The general] wants to leave troops on West Bank territory,” the prince lashed out. “He wants us, the Arabs, to recognize pre-negotiation Israel's condition as a Jewish state, … a condition that was never put when Israel signed agreements with Egypt and with Jordan. He wants us to accept that the so-called Palestinian entity that will come out of this will allow for Israeli settlements in the West Bank. More land to be taken by these settlers, who have absolutely nobody with the courage to tell them, 'Stop.' … That's the reality that the general is proposing. … It is not going to happen.”

Unfortunately, given the current makeup of the Israeli government, the Arab League’s groundbreaking proposal and even Yadlin’s conservative plan are not about to happen.