Saudi Prince Turki Al-Faisal said the Islamic State wouldn't be a threat if the United States had armed Syrian rebels. 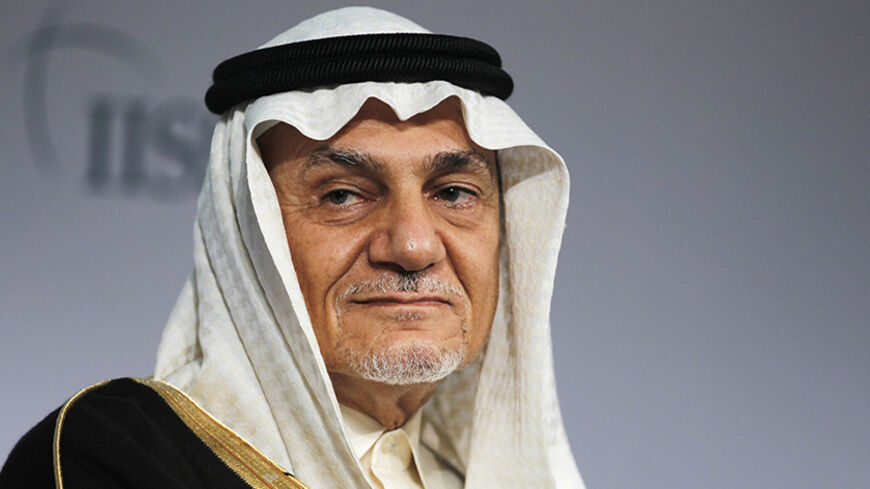 Saudi Arabia's Prince Turki Al-Faisal on Tuesday blamed the United States and Europe for the rise of the Islamic State (IS).

The former intelligence chief and ambassador to the United States said arming the so-called moderate rebels battling Syrian President Bashar al-Assad when the civil war broke out three years ago would have prevented extremists from filling the void. Faisal said the recent creation of an international coalition to combat the group was a good first step, but that IS cannot be defeated until the world gets behind the Syrian opposition and ousts Assad.

"Had America and Europe listened to the kingdom and provided the moderate opposition with anti-tank, anti-aircraft and artillery weapons, we would not have had to deploy our air forces to face the challenge of [IS]," Faisal said in the keynote address of the annual Arab-US policy conference put together by the National Council on US-Arab Relations. "These terrorists filled the void because of this neglect of the genuine opposition. And while Assad continued to bomb and gas his people, the moderate opposition had to fight on two fronts."

Faisal is often trotted out to declare publicly what current Saudi officials say in private. Last year, he told Al-Monitor in an interview on the sidelines of the NCUSAR conference that there was a "high level of disappointment" with the Barack Obama administration's Syria policy.

"Along with diplomacy, there must be a level playing field among the combatants on the ground," he said Tuesday. "Bashar's military superiority is what is prolonging the conflict. Supplying the defensive weapons needed by the Syrian people to defend themselves is what will bring a political settlement. By now, we all know who are the good guys and the bad guys — and supplying them with the weaponry will raise their prestige and give them credence with their people. Dilly-dallying is what has allowed Jabhat al-Nusra and other extremists to enter the fray — not the will or wish of the Syrian people."

Congress passed legislation last month authorizing the Department of Defense to train and equip 5,000 vetted rebels as part of Obama's anti-IS policy. Critics, however, say the policy does not do enough to empower the rebels.

Faisal reminded his audience that he warned the administration a year ago of the risk of not carrying out its threat to bomb Syria if Assad used chemical weapons.

"This is not the time to say, 'We told you so' — it is time to go forward and build on the present military action with a political program to pacify and defuse the many hot spots in the Middle East," Faisal said. "Destroying [IS] is welcome but it is the symptom, not the disease."

He urged the United States to support the Syrian opposition's to create a national reconciliation government with Syrian government officials who don't have blood on their hands.

"By removing Assad, the Syrian people will be able to form a unity government that will face the terrorists," he said, "while supplying the moderate and inclusive opposition with defensive weapons will neutralize Assad's arms superiority. A no-fly zone on the borders of Syria with Jordan and with Turkey should be declared, and the coalition council should be helped in setting up their government on Syrian soil."

Faisal went on to blame Iran for stoking violence in the region, through its support for Assad and Islamist groups in Egypt and across the region. He accused Tehran of being the "main spoiler" of cease-fires between Hamas and Israel, but also had harsh words for Israel.

"The need to resolve the Palestinian-Israeli conflict is plain to see for any reasonable party in the dispute," Faisal said, echoing recent comments by Secretary of State John Kerry that have been denounced in Israel. "The fact that all the extremist terrorist groups operating in these countries use the plight of the Palestinian people under Israeli occupation to justify their terrorist activity should convince even the die-hard supporters of [Prime Minister Benjamin] Netanyahu that as long as Israel oppresses the Palestinian people and denies them their right to a nation and an identity, we will continue to see the rise of terrorist groups even as we work to destroy [IS]."

Finally, he challenged critics who accuse the Saudis of funding extremist groups such as IS to "either put up or shut up."

"Since Sept. 11, the kingdom has worked closely with the United States, the European Union, the United Nations and other countries to identify the miscreants," he said. "Those who have been identified have been prosecuted and convicted. So you can't point your fingers and not come through with what you know."