Why Sudan wants to stop the 'spread of Shiism'

In the past year, Sudan has joined the Saudi-led war in Yemen, shut down Iranian centers and finally cut diplomatic relations with Iran, but has Khartoum really turned pro-Saudi — or just anti-Shiite? 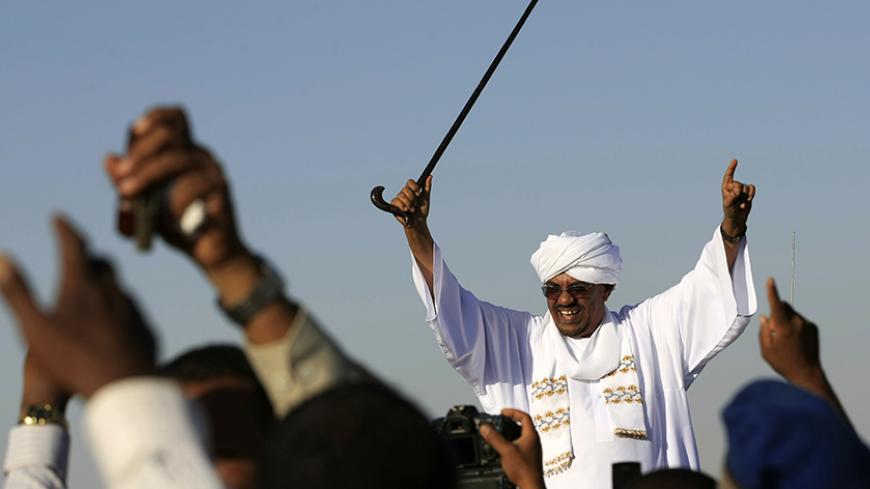 KHARTOUM, Sudan — ‪Increasingly, Sudan appears to be assuming greater space in Saudi Arabia’s foreign policy. Last year, Sudanese warplanes and troops joined the Saudi-led war in Yemen. Moreover, Sudan is the only country, besides Bahrain, which has joined Saudi Arabia in recently cutting diplomatic relations with Iran. This followed the attacks on Saudi diplomatic compounds in Iran after the execution of Saudi Shiite Sheikh Nimr al-Nimr. Of further note, Riyad's announcement‪ of a 34-member coalition against the Islamic State includes Sudan, which as recently as 2013 saw its President Omar al-Bashir banned from flying over Saudi airspace en route to Iran. While the “Islamic Coalition” is not a military alliance, Khartoum’s involvement in Yemen effectively makes it a military partner of Riyadh, cooperation for which it has reportedly received $2.2 billon.

Mindful of the above, has Sudan really gone pro-Saudi? Or is it just increasingly anti-Shiite?

Sudan’s acceptance of Saudi Arabia’s “cold hard cash,” as one report describes it, does not in itself signal a fundamental change in Sudan’s political orientation. Indeed, while the sensational political shift toward Riyadh is new, Saudi investment in Sudan is not. The Saudis have long been the biggest single investors in Sudan, having pumped an estimated $11 billion into the country — and particularly in agriculture. For instance, almost all of Sudan’s sheep and mutton exports go to Saudi Arabia, one of the reasons why sheep is exorbitantly expensive for Sudanese — even in rural areas, where an animal goes for some $200.

Sudanese moves against Shiite political power in the region also suggest that there is more to Khartoum’s repositioning in its foreign policy than just the lure of petrodollars from abroad. The Islamic Coalition initiative has already been criticized for ignoring the Shiite and Shiite-related elements of the regional political structure — for instance, excluding both Iraq and Syria apparently due to their close ties to Iran. In this vein, it should be borne in mind that the Saudi-led war in Yemen is also widely seen as a proxy war against Shiite Iran and its allies. For Sudan, this endorsement of — and participation in — efforts to freeze out Iran is new. Until recently, Tehran and Khartoum had maintained good relations for decades, particularly in the field of weapons trade and the exchange of armaments more generally. Commenting on this, and the Sudanese government’s simultaneous closure of Iranian centers and cultural institutes, Yassin Ibrahim of the University of Al-Nileen in Khartoum told Al-Monitor, “[The government] wants to stop the spread of Shiism.”

Indeed, Sudan now appears to be more than ever before focused on countering the “spread of Shiism,” as some put it. Yet, its current pro-Saudi posture is in essence ambiguous. On the one hand, it is clear that the Saudis and the Sudanese are consciously crafting a mutually convenient financial and political alliance. However, the relationship is perplexing from a sectarian angle. Riyadh has long since championed Wahhabism, the predominant brand of Islam within its borders. And indeed, as one UK-based Sudanese academic told Al-Monitor on condition of anonymity, due to the sensitivity of Sudan’s sectarian makeup, “In recent years Salafism has increasingly taken root.” However, Salafists in Sudan have failed to attain a strong political platform. They have instead continuously had a tense relationship with the central government, and also with adherents of Sufism, another branch of Islam that is predominant in Sudan.

The most prominent Salafist group is known as Ansar al-Sunnah, which literally means "followers of the tradition of Prophet Muhammad." Naturally, its emergence has been seen as a direct result of Sudan’s links with Saudi Arabia. Indeed, a high-ranking member of the group who also serves as a government official told Al-Monitor on condition of anonymity, “Ansar al-Sunnah has widespread relations with Saudi Arabia, and it has taken the approach of Muhammad ibn Abd al-Wahhab [the founder of Wahhabism].” Ansar al-Sunnah, through its members, is vocal at universities and in fraternities, and builds at a prolific rate, particularly when it comes to the construction of religious schools and mosques.

Apparently now joined by a strong common interest in fighting Shiism, Sudan’s government and Ansar al-Sunnah should in theory be in agreement with each other. The Saudi version of Salafism is widely known for its vitriol against Shiism and other branches of Islam, including Sufi and Sunni schools of thought. The Sudanese brand of Salafism appears to be no exception to this rule. Sheikh Mustafa al-Mukhtar, an Ansar al-Sunnah imam based in northern Sudan, told Al-Monitor that Sufism and Shiism have “nothing to do with Islam.” The UK-based academic, who spoke to Al-Monitor on condition of anonymity, agrees, “They do not speak against them [Sufis] publicly, though privately, they would like the demise of all Sufi orders in Sudan and elsewhere among Muslims.” The Sudanese official also displayed the same attitude, saying that “the execution of the Shiite rejectionist Sheikh Nimr al-Nimr is satisfying and necessary for [Saudi Arabia], because he was destabilizing the[ir] security … and the Holy Mosques.”

However, things are more complex than that in Sudan. The Sudanese official who is also a member of Ansar al-Sunnah told Al-Monitor, “Ansar Al-Sunnah is a group [that has] deviated from the path of teaching people the religion. They became involved in politics and started to think about ruling the country.” This link between the spread of Salafism and related Salafist political influence has been witnessed elsewhere in the past: In a 2013 study of Egypt, Tunisia, Bosnia, Pakistan and Indonesia, the European Parliament concluded, “Financial aid granted by Salafists/Wahhabists, whether by institutional or private [donors], systematically pursues a goal of political influence.” Ansar al-Sunnah sternly rejects accusations of its intentions to seize power — especially after its official entry into the Cabinet last June, when Mohammed Abu Zaid Mustaf, one of the group’s members, was appointed minister of tourism. Ansar al-Sunnah Imam Mukhtar used the political trajectory of the Egyptian Muslim Brotherhood as an example to be avoided in his conversation with Al-Monitor. “This is not about changing the government. We want the middle path — it’s not about force, it’s about belief,” he said.

Unsurprisingly, the relationship between the central government and Ansar al-Sunnah has been and — despite the group’s recent inclusion in the Cabinet — continues to be, tense. The authorities have tried to contain the Salafist group’s activities, and in return Ansar al-Sunnah has accused the government of harassment, criticizing the latter on a regular basis. Yet, for Sudanese such as Ibrahim of Karthoum's University of Al-Nileen, on balance, it is “a good thing that Salafists are allowed to be in Sudan, as they provide the money to construct public services that the government does not.” Thus, in the grander scheme of things, it seems that Bashir appears to be resorting to accommodation rather than confrontation in his efforts to contain the group.