The story of a young Sudanese student’s journey through despair, fanaticism and transformation. 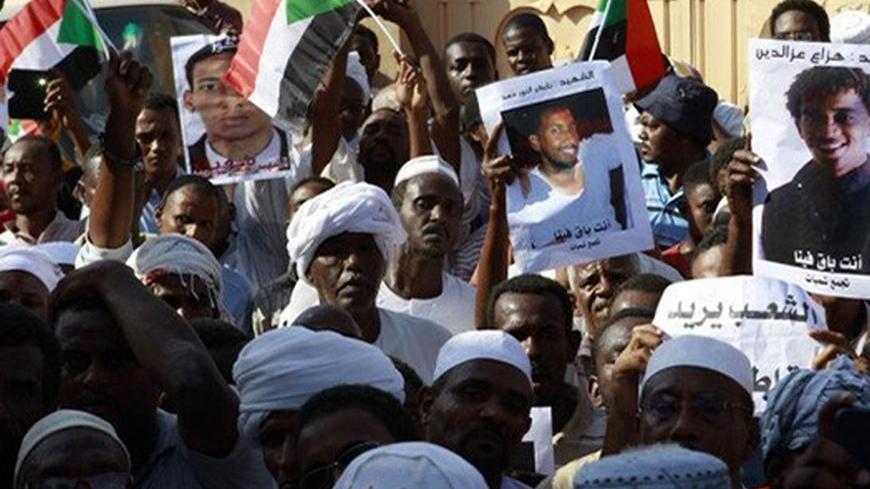 People hold aloft pictures of youths they say have been killed by the government while suppressing protests in Khartoum, Oct. 4 2013. - Reuters

Over greasy McDonald’s french fries and soda, a meal we could never have shared in his native Sudan because of international sanctions, Nabeel Mohamed tells me the story of his descent into fanaticism, and his escape from it. “See, I was tolerant, then I became fanatic, and now I’m tolerant again,” he says, sitting at the Voice of America office where he works. His story is not an action-packed thriller of terrorist networks and grandiose plots to change the world order, but a story of insidious forms of extremism that emerge from intellectual repression and social restriction.

Gentle-mannered and quick to laugh, Mohamed, 23, always has a book tucked under his arm — currently, he's reading a history of Eastern Europe. Through his love of books, Mohamed carries on Sudan’s history of a vibrant intellectual life. At a reading in Sudan in the 1960s, the late Syrian poet Nizar Qabbani paid homage to this tradition with the saying: “Cairo writes, Beirut publishes and Khartoum reads.”

However, the generations who have come of age under the 24-year rule of autocratic President Omar al-Bashir, like Mohamed, are the “lost generations.” Their exposure to the outside world has been limited due to growing up amid censorship; an onslaught of government propaganda; a deteriorating education system; religious and social close-mindedness and sanctions by the international community. Those who have struggled to find and keep Sudan’s intellectual tradition alive have done so out of sheer determination.

“My father and his generation used to read all sorts of books — foreign ideologies, stories, all sorts of things. In our minds the West has been characterized as bad and evil — that they want us to abandon our culture, our religion, so we’re not even open to reading their books. Even the ones translated into Arabic, we put labels on that author — he’s a communist, he doesn’t believe in God or he’s an agent, so why would we read that,” Mohamed says.

While much of Sudan, including Mohamed’s own family, follows a more mystical form of Islam, Sufism, Mohamed grew to follow an ultra-orthodox version of Islam thorough the Salafist group, Ansar as-Sunnah, during his teenage years in Khartoum. The group is known for strictly adhering to a more literal interpretation of religious doctrine.

Mohamed’s involvement with Ansar as-Sunnah was a drastic departure from his childhood life. He was born in the border town of Wau, a major trading post between northern and southern Sudan, where his extended family was made up of both Christians and Muslims. While he attended a Quranic school from the age of three onward, he also sometimes attended church with his relatives.

In 1998, the civil war, which had been raging since 1982 between southern rebels and the northern government, came to Wau, eventually displacing the family to Sudan’s capital, Khartoum, which remained untouched by the fighting. In Mohamed’s own life, the north-south divisions are ambiguous: His father is a northerner and his mother is a southerner.

Early within the regime’s grasp, Khartoum had willingly caved to the Islamization and Arabization policies of the ruling National Congress Party (NCP), which was intent on building an Islamic state. Unlike the NCP, which fused religion and politics, Ansar as-Sunnah often shied away from politics. Instead, they were committed to gradual reform through education and proselytizing. Entering his teenage years, Mohamed attended an Ansar as-Sunnah mosque at the invitation of a neighbor. The more he started paying attention to the preachers there, the more fanatic he became.

He started to view his father’s Sufi religious beliefs as wrong; he refused to greet female relatives with a handshake; speaking to women outside of the family was unthinkable; and Christians became categorized as “non-believers,” instead of family. His mentor at the mosque preached the vitality of education in building an Islamic nation, and Mohamed fortified himself with the knowledge to defend his beliefs.

While he mastered formal and Quranic Arabic, which differs significantly from spoken Arabic dialects, Mohamed learned that even speaking English, which was haphazardly taught as a second language in schools, was against Islam. It was believed that knowing a foreign language might taint the purity of one’s Arabic.

However, egged on by a childhood best friend and competitor who was excelling in English, Mohamed began attending English classes.

When pushed about why he pursued English, he simply responds, “I felt the need.”

Starting to learn English unleashed a torrent of irreconcilable confusions for Mohamed. Contrary to the idea that learning English caused demise, he realized, “It’s just a language. People communicate ideas with it, what’s wrong with that?” On the one hand, Mohamed felt plagued that he was doing something wrong by learning English, especially as it was starting to undercut his religious beliefs. On the other hand, he could not understand how he could dismiss something he knew nothing about.

Initially, Mohamed was condescending when he read through his English-language coursework, which focused significantly on the Western lifestyle, but slowly, things that were not supposed to make sense, did.

Reflectively, he says, “It was thought-provoking for me. I started thinking and thinking. People are free, they do this and that. We’re not free. We’re not even free to express ourselves. Intellectually we weren’t free. Socially we weren’t free. Growing up, I had always wondered about the existence of God, and I always feared that deep down inside, I was a non-believer. But shaitan, the devil, was always to be blamed for sowing the seeds of doubt.”

Pursuing his study of English, Mohamed became involved in an English-language book club and open-mike nights at the German cultural center. There were few places for Mohamed to feel he could discuss and think freely without a filter, for social and political reasons. Khartoum’s youth have almost no cultural gathering places, and those that do exist are on the National Intelligence’s radar as possible hubs of political dissent. Even accessing materials can be challenging due to censorship, and many of the youth download books from the Internet to circumvent the system.

All of these gatherings and discussions challenged Mohamed’s thinking far beyond what his religious books had taught him. “When I thought about my life, I realized how unfulfilled I was, how closed off and how there was an entire world that I pretended I didn’t care about, and without being conscious of it, I started slipping out of it,” he says.

Mohamed now finds himself in the bureaucratic center of the Western world where is he is on a fellowship dedicated to a year of building leadership skills. Although the freedoms and opportunities of Washington are coveted, Mohamed finds it difficult to not be preoccupied with recent events in Sudan.

On Sept. 22, President Bashir mandated the removal of fuel subsidies, a measure supported by the International Monetary Fund as part of its austerity plan for Sudan. Fuel and food prices doubled, and an already beleaguered population took to the streets in anti-government demonstrations. While economics matters, the root frustration for many, including Mohamed, is with the NCP’s regime. Marginalization, war, growing inequality and a sophisticated brutality have marked it’s decades-long rule.

When asked if he will go back to Sudan, Mohamed, goes quiet for a minute, “I might not be able to live comfortably in Sudan, or with the mentality in Sudan. It’s just the way people are. Having to repress yourself, your thoughts, your views.”

As we click through pictures of bloody protests, Mohamed expresses hope, if not belief, that these protests might lead to something different. “After these protests, I want to be part of rebuilding Sudan, regardless of whether or not they’re successful. If Bashir goes, then it’s more important. If he doesn’t, then we’ll keep doing what we’ve always been doing.”

Due in part to his frustration with Sudan’s politicians, and in part to his training under Ansar as-Sunnah, he prefers an unassuming, subversive form of rebellion.

“For me that means becoming a teacher, to have a chance to give students what I didn’t have in many ways. Through education, you’re giving them the tools to see for themselves.”

Zenobia Azeem is a freelance writer focusing on Egypt. She has worked in international election observation for the past five years, primarily in the Middle East. On Twitter: @elbowsymmetry