Turkish imam Mehmet Akif Koc has been giving sermons in English for the past five years. 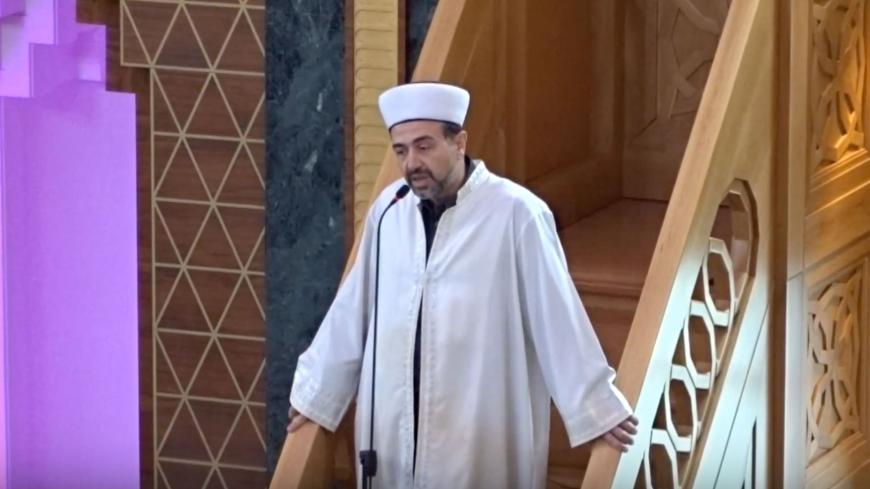 From a mosque in the capital’s Cankaya district, Mehmet Akif Koc gives biweekly sermons in English — a unique practice in Turkey. Even without his interest in the writings of Noam Chomsky, the Ankara-based imam and professor would have a claim to be one of Turkey’s more unorthodox Islamic scholars and preachers.

Apart from the Arabic of the Quran, there is no record of a non-native language being used on a regular basis in any of Turkey's other 80,000-plus mosques.

In the heart of Ankara’s embassy district, Hasan Tanik mosque has come to cater to diplomats and students since Koc began giving the Friday sermon, or hutbe, in English five years ago.

Koc, a professor of divinity at Ankara University, told Al-Monitor that around one in five members of the Friday congregation, around 1,000 worshippers that flock to the squat stone mosque, are non-Turkish speakers.

“I didn’t know people were interested in English sermons, but I found there was a necessity because 20% of the Muslims at this mosque didn’t know Turkish,” he said.

Libyan Aiman El Raibi, who has been attending the mosque for the last four years, told Al-Monitor the English-language sermons offer foreigners a feeling of inclusion, adding, “It’s very helpful if you don’t speak Turkish and makes you feel more part of the community.”

His Algerian friend Fathi El Jazairi said, “The English sermons are one of the reasons we come here. I’ve been in Turkey since 2014 and coming to this mosque means that at least we can understand some of the hutbe. Unfortunately, I haven’t learned Turkish, so the English sermon helps us understand.”

Last Friday’s 12-minute sermon focused on the gap between rich and poor and highlighted recent research that showed the world’s 26 richest billionaires own as many assets as the poorest half of the global population.

“It’s very important to hear these messages,” said Jazairi. “It’s about justice for the poor and for humanity. It’s a message for all people who are entrusted with wealth.”

The role of language in religion has a controversial history in Turkey, especially between 1932 and 1950, when the adhan, or call to prayer, was changed from Arabic to Turkish despite widespread public opposition. When the Democrat Party came to power in the first free elections of 1950, a promise to return to the Arabic call to prayer formed part of its campaign. The return of the traditional adhan was compared by one newspaper to the Prophet Muhammad’s conquest of Mecca.

The issue remains alive today. Last November, parliament member Ozturk Yilmaz was expelled from the Republican People’s Party after he called for the adhan to be made once again in Turkish.

Meanwhile, in Turkey’s predominantly Kurdish southeast, sermons are often given in Kurdish after Kurdish rights improved in the late 2000s. The government first officially sanctioned Kurdish-language sermons in 2009. The hutbe read at Ulu mosque in Diyarbakir was the first given by the Directorate of Religious Affairs, or Diyanet, in Kurdish. Imams in Turkey’s southeast had previously given informal sermons in Kurdish, despite the language being banned until 1991.

Koc said he was motivated by his father, who urged him to use the knowledge gained from a career in academia for the benefit of the community.

“Before my father passed away, many times he visited my office and criticized me and said I hadn’t done anything for the ordinary Muslim citizens of our country,” Koc said. “After that I visited the mufti for Cankaya and explained the issue. He told me they were looking for someone to give sermons in English and Arabic. He suggested that I write my own sermons. We started with both languages but later dropped Arabic.”

While Koc says he has received some criticism for his English-language sermons from people with “nationalistic tendencies,” the imam’s work has generally been well received and he has won over many of those who were originally suspicious of foreign-language sermons. “Three weeks after I first started giving English sermons, an old man came to me and said, ‘Oh my young imam, you speak very beautifully but it's against the tradition of our prophet,’” he explained.

“He was very nice and I didn’t want to make him angry or sad. I thought he was accustomed to the Turkey of the last 50 years and I said, ‘My grandfather, do you suppose the Prophet Muhammad gave an address in Turkish?’ He said, ‘You’re right, I didn’t think.’”

With a mixed congregation of Turks and worshippers from countries such as Pakistan, Malaysia and Indonesia, Koc wants the mosque to promote understanding between cultures and challenge modern interpretations of Islam.

“Many times I criticized the Muslim world about education, for example,” he said. “Last week I criticized the lack of Islamic-style entertainment. The Prophet Muhammad permitted the singing of songs but now we ban it. Why?”

As well as English, Koc also speaks German, having found learning languages relatively easy after memorizing the Quran as a student. He also has a keen interest in modern philosophy with writers such as Noam Chomsky, the American theoretical linguist also famed for his criticism of economic elites.

“I’m very keen on Chomsky,” Koc said. “Here at the divinity faculty of Ankara University we teach our students critical thinking and I teach them about The God Delusion so they can argue against it rationally."

As for Koc’s Turkish congregation, they seem to fully support his approach to non-Turkish speakers.

“It’s good that so many foreigners come here on Fridays,” said member Bayram Kanat. “It’s only here that people can meet others from other Muslim countries.”