Tunisians Unite Against Video But Differ on Violent Response

Mischa Benoit-Lavelle speaks with Tunisians at the scene of Friday's assault on the US embassy in Tunis set off by an anti-Islamic video. Some protesters blamed the US for the video and even some police officers sympathized with the protesters' violent reaction. Others claimed the government hadn't done enough to corral the protests. 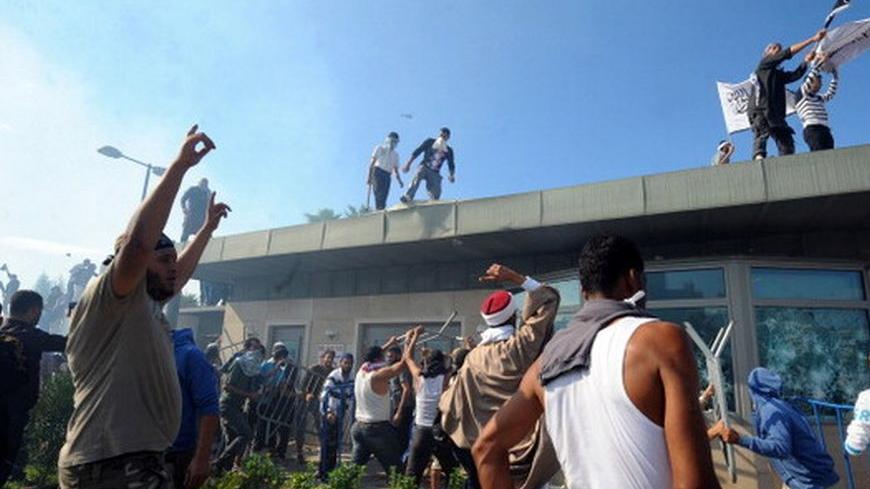 Tunisian protesters break into the US embassy in Tunis during a protest against a film mocking Islam on September 14, 2012. The demonstrators, acting aggressively, managed to clamber over one of the walls round the mission, near the car park where several vehicles had been set ablaze, the photographer said. - FETHI BELAID/AFP/GettyImages
September 15, 2012

TUNIS – As images of the black smoke rising from the US embassy and news of deaths circulated in the Tunisian media, shock and dismay spread with them.

Amina el-Mahdhi, a young woman in her twenties who works for the International Federation of Human Rights, was driving down the highway that connects downtown Tunis to the suburb of La Goulette when she first saw the column of smoke and heard on the radio where it was coming from.

“I had been looking at the beautiful landscape, all the beauty that was around me, and I saw the smoke, and I thought, ‘This is not us, this is not my country.’ I was shocked,” said el-Mahdhi, “It’s not us. We’re tolerant. We’re not violent.”

El-Mahdhi was not alone in her indignation, but government statements gave a more qualified form of condemnation.

In a nationall televised interview, Rachid Ghannouchi, the leader of the ruling Islamist party Ennahdha, denounced the violence but stated that what happened today would never have come to pass if a law against blasphemy like the one his party has proposed had been put in place.

Tunisian interim President Moncef Marzouki, a former human rights activist whose centrist party has entered into a coalition with Ennahdha, took a more conciliatory line.  In a televised address to the nation, he began by calling the film “unacceptable” and then saying the use of violence was also “unacceptable.”

For some, the government has failed to take a strong enough stand.

Tunisian academic and philosopher Youssef Sadik publicly asked for the resignation of Interior Minister Ali Laarayedh, on the grounds that insufficient actions were taken to curb extremist violence.

Sarah Ben Hamadi, a well-known activist and blogger, was one of many who echoed Sadik’s statements on social media, saying via her Twitter account, “I’m waiting for a resignation.”

But for many ordinary Tunisians, shopkeepers, restaurant workers and taxi drivers, dismay at the day’s display of radicalism and violence was mixed with a certain level of understanding for a reaction to a film they view as beyond the pale.

This understanding extended even to some of the very security forces who were called on to halt the day’s violent demonstrations. While a dozen or so thrashing protesters were pulled by police into vans, behind the embassy, officers standing nearby expressed their ambivalence at the days’ events.

One young officer, Abdelhamid Barkaoui, said that not only did he “understand” the anger of the protesters, he actively supported their cause.

Barkaoui felt that the US, and the US government, was responsible for the film because it had not done enough to prevent its release and distribution. Barkaoui even speculated the film might have been made by the US government expressly to insult Islam.

Another officer standing nearby, who declined to give his name, concurred with his colleague. “It’s not just me and him; it’s all Tunisians [who are angered by the film],” he said.

One Tunisian who was unequivocally on the side of the protesters was Nacer, a 23-year old who was raised in France but came back to Tunisia to live in an “Islamic environment” and study written Arabic. Nacer, who describes himself as a Salafist, came to the protest more to observe than to participate, but nevertheless felt that the protesters’ cause was just.

“It was correct. According to Islam, when the Prophet Mohamed is insulted you’re obliged to react. You’re obliged to show that you’re not okay with that. There are texts that show it’s authorized to attack,” he said.

“For most people today, the US is a declared enemy. For most of them it’s not the producer [of the film] it’s the US. Personally, I’m more or less in agreement that the US government is the enemy. They’re everywhere; they kill a lot of people,” said Nacer.

Nacer has been in Tunisia for a year now, and plans to settle down here and eventually bring his wife over from France. He is happy here, and says that most people in his neighborhood of Cité al-Khadhra, a suburb just north of the capital, think like him. The imam at his mosque preaches ideas in line with his beliefs, calling, for example, for “the destruction of the US.” The protest today, Nacer says, was a good beginning, a warning to the secularists in the media and in politics. The goal?

“The goal is that the law be the sharia. That law is God’s law,” he said.

Nacer holds two passports, Tunisian and French. Donia Rajhi Tabb also holds two passports, Tunisian and American. Tabb came to the protest because she has a personal tie to the embassy and its staff. In fact, it was at the embassy that she met her husband, who was formerly part of the small contingent of marines stationed there. It was there that she had her engagement party.

As Tabb stood on the terrace of a corporate building and gazed impassively at the massive line of police vans and national guard vehicles and the last streams of smoke rising from the embassy, she spoke on the handling of the day’s unrest.

“I don’t know why they didn’t shoot them. Normally, when someone breaches the embassy they shoot,” she said in a matter-of-fact, Carolina-accented voice.

Her bluntness, however, hid her anxiety. “I know people who work there. I hope they’re alright,” she said.

Even Tabb, though she was saddened and “shocked” but what happened, can sympathize with something in the protesters’ motivation. A typical Tunisian, she said, “would be angry; they’d feel insulted. Being a Muslim, you love God and you love the Prophet. It’d be like if someone tried to hurt your family. You don’t necessarily respond rationally; it’s a feeling.”

“I understand their anger, being Muslim, but I disagree with the violence,” she added.

Understanding, for Tabb, has its limits. The events of today were a sign to her that there was “no security” in her country. The threat posed by religious extremism has called into question in her mind the very change of regime that the Tunisian revolution brought about.

“When Ben Ali was here, this never would’ve happened. If he comes to the airport, I’ll be the first person to greet him,” said Tabb. “The way he was dealing with the country it was safe. It wasn’t good for everyone, but it was safe.”