It remains to be seen whether the Tunisian government’s crackdown on terrorists, including targeting "radical" preachers, will reduce violence in the country, writes Mischa Benoit-Lavelle from Tunisia. 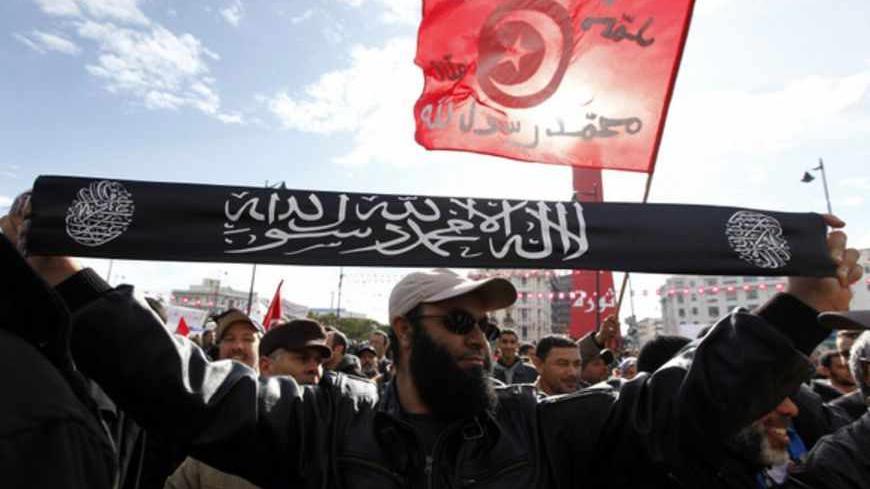 A man from the Salafist faction holds up a banner that reads, "There is no god but God, and Muhammad is the messenger of God," on the second anniversary of the Tunisian Revolution at Avenue Habib Bourguiba in Tunis, Jan. 14, 2013. - REUTERS/Anis Mili
Mischa Benoit-Lavelle
May 10, 2013

TABARKA, Tunisia — With 16 soldiers and national guard agents injured while hunting for an extremist group in Tunisia's mountainous border area, the country is witnessing its most dangerous confrontation with Islamist violence to date.

Underscoring the seriousness of the threat, the interior minister confirmed on May 8 that the group being pursued was affiliated with the Oqba Ibnou Nafaa Militia, part of al-Qaeda in the Islamic Maghreb, and that among its two dozen or so fighters were some who had returned from the Islamist insurgency in Mali.

The ruling Islamist Ennahdha party, however, seemed to be unfazed by the turn of events.

In a press conference on May 9, Tunisian leader Rached Ghannouchi stuck to the party line, saying that criminal acts would be treated individually, and that human rights would not allow for any action to be taken against a group or movement, such as the loosely-defined “Salafist” movement, followers of a conservative interpretation of Islam who believe sharia should be applied throughout the Muslim world.

“We're not in a war of ideas,” said Ghannouchi, adding that the Tunisians who had joined the militants in the mountains were “careless youth.”

However, one of Ghannouchi's statements signaled a possible shift in the thinking of the party: He said he was open to using Tunisia's anti-terrorism law, a 2003 product of the Ben Ali era that gives the state sweeping powers to combat terrorism. The law criminalizes any incitement to commit terrorist acts, as well as belonging to any group considered to be involved in terrorist acts, and has an extremely broad definition of what constitutes terrorism. In fact, the powers conferred by the law are so broad that it was condemned by Amnesty International in 2003 and Human Rights Watch in 2011.

The law could criminalize many ultra-conservative Tunisian preachers who are currently spreading their message unimpeded.

For example, in a speech a week ago, Kamel Zarrouk, a preacher affiliated with the unauthorized Tunisian Salafist group Ansar al-Sharia, said, “I would like to declare loud and clear, that the al-Nusra Front, Ansar al-Sharia, al-Qaeda, the Islamic State of Iraq and the mujahedeen in Somalia, Mali, and Algeria, we all stand united against our enemies.”

Under a strict interpretation of the anti-terrorism law, Zarrouk could wind up in prison for such a statement. Ansar al-Sharia is set to have its annual meeting on May 19 in Kairouan, the Islamic world's fourth-holiest city. Last year's gathering drew about 3,000 supporters.

Ameur Laarayedh, the head of the political bureau for the Ennahdha Party, said that the meeting of Ansar al-Sharia could in theory take place. “If it's a meeting of speech, of ideas, of things like that, there's no problem. But if there is a preparation or even a call for violence, it's strictly disallowed and we will apply the law.”

A spokesperson for the Interior Ministry said that officials had not yet decided whether or not to allow the group to hold its meeting.

While the authorities remain vague about whether or not they plan to have recourse to the controversial law, it appears that some level of assertiveness is being exercised on Salafist preaching, in particular on the so-called “prayer tents” which have cropped up throughout the country in the past year. Outside of mosques, schools, even, in one case captured on video on a bus, Salafists and other conservative Muslims preach loudly from megaphones, attempting to call their countrymen toward their way of thinking.

The phenomenon is now being challenged by lawmen. In the past week and a half, several videos have circulated online of police breaking up prayer tents in the cities of Sfax, Cite Al-Khadhra and Nabeul. In the most heated encounter, police used tear gas to disperse a prayer tent in the coastal city of Tabarka before preaching had even begun. Three men involved in the incident remain in jail, awaiting trial, though police in the city would not comment on what they were charged with.

Tabarka is in some ways an exemplary case: A middle-class town with no history of radicalism, it has seen a growing presence of prayer tents in its central public garden, never challenged by police until last Sunday. Some residents of Tabarka think that whatever the legal background, this new targeting of Salafist preaching is a necessary move.

“It's a good step. There's no better solution,” said Mokdad Bejaibia, who returned to his native Tabarka a year ago after earning a living as a metalworker in France. He said that over the past year he's seen more and more men tending toward Salafism and that he believes their ultimate goal is to take power.

“We have to destroy them or make them follow the right path. They [the authorities] must use force. These are determined people,” he said.

However, those in Tabarka who were sympathetic with the Salafist movement saw in the crackdown on preaching a return to old, undemocratic practices. Faysal Sghiri, who works odd jobs in the summer tourist season, believes that the prayer tents should be protected as free speech.

“It's a new dictatorship. Again, there's a campaign against Islamists,” said Sghiri, who wore the conservative Muslim beard without mustache and spoke positively of Salafist ideals, though he did not belong to any group. “Now they want to stop us from performing public prayer.”

He said said he did not think it possible that the combatants holed up in the Tunisian mountains were Salafists, as their thinking was not in line with the Salafist concept of jihad: “Anyone who says there's jihad in this country, we laugh at them. Jihad is for countries at war, like Syria.”

For Sghiri, as for other conservative Islamists, cracking down on Salafist ideas because of the actions of others amounts to the persecution of a minority group. It appears that Salafists may not take that lying down.

While Tabarka remained quiet on Friday, a Facebook page entitled As-shouyoukh As-salafiya fi Tounes (The Salafist Sheikhs of Tunisia), with over 56,000 followers, posted a call on May 9 to “all brothers” to set up prayer tents “in every city and village and neighborhood” in protest of the dispersal of the other prayer tents. On May 10, the Salafists of at least one city, Bizerte, heeded that calling, turning out to pray and protest.

It remains to be seen whether the Interior Ministry's new stance on preaching will bring an end to, or exacerbate, Tunisia's problems with religious conservatives.